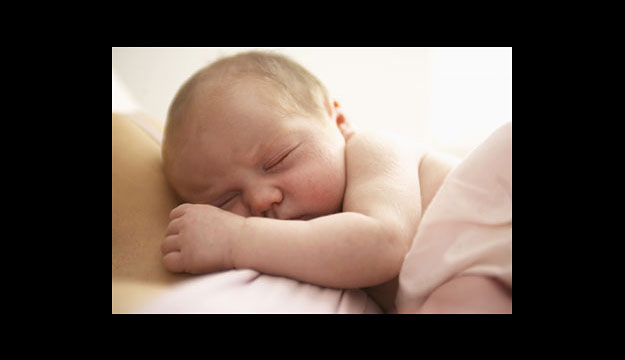 Newborns spend most of their time sleeping during the first few months of life as they grow, learn and gain the strength necessary to practice important motor skills. Placing babies on their backs during sleep reduces their risk for sudden infant death syndrome (SIDS) but may cause an unintended side effect — plagiocephaly, a disorder in which the back or side of an infant’s head becomes flattened.

“Misshapen heads are not uncommon in newborns,” says Yoshio Setoguchi, MD, former pediatric coordinator of the UCLA Craniofacial Clinic. “In the past, the condition was most often associated with multiple birth pregnancies, in which babies got stuck in one position in the uterus, or with pressure passing through the birth canal during delivery.” Tight or shortened neck muscles that prevent an infant from moving his or her neck around (torticollis) has also been traditionally associated with plagiocephaly.

More recently, the number of infants who develop plagiocephaly has increased fivefold, according to some estimates. “We’ve seen many more cases of positional plagiocephaly since we began recommending that parents place infants on their backs during sleep, which is important to prevent accidental suffocation,” Dr. Setoguchi says.

All babies are at risk for positional plagiocephaly if they repeatedly spend time on their backs or side with their heads resting against a flat surface, such as a crib, swing or car seat. This occurs because infants’ heads are soft to allow for brain growth during their first year.

“Babies with development delays are at highest risk for positional plagiocephaly because they begin to roll or sit up late and, as a result, will be on their backs longer,” says Marinda Tu, MD, a pediatrician in the UCLA Craniofacial Clinic. The condition is most often diagnosed when parents become concerned about a flat spot on their child’s head or during well-child examinations at two or four months. The condition will often resolve itself without treatment or with conservative therapies that involve repositioning babies when asleep and stimulating developmental activities, Dr. Tu says.

“We encourage beginning ‘tummy time’ early, which will help the child begin to roll over, crawl and sit up without support,” Dr. Tu says. “The idea is to get the baby off his or her back so that their head shape can round out over time.” According to Dr. Tu, parents should gradually increase tummy time up to 20 minutes each day, but she cautions that young babies should never be left unattended while on their stomachs.

For some babies with positional plagiocephaly, therapy using a corrective helmet, or cranial orthosis, may be required to redirect the growth of the skull. Surgery is rarely required.

“Few people have perfectly round heads,” Dr. Tu says. “Treating plagiocephaly is purely cosmetic and not related to brain development. It’s really more about what we can do to make the condition less obvious.”