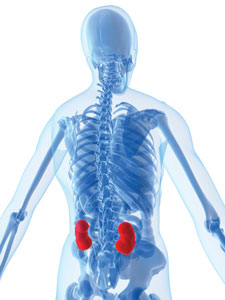 An innovative program that exchanges the kidney from an incompatible family member or friend for a compatible kidney from a stranger is giving UCLA patients hope of being freed from the constraints of dialysis. “It’s a winning situation for everyone,” says Jeffrey Veale, MD, associate professor of urology and director of the UCLA Kidney Exchange Program. “Instead of waiting years for a deceased donor kidney, patients can quickly receive a living donor kidney — which in general lasts twice as long.”

UCLA has one of the world’s highest-volume kidney-transplantation programs and is the most active chain transplantation center in the United States, performing 93 chain transplantations to date. “Besides getting people transplanted rapidly with the highestquality organs, there’s a real humanity component to this program,” Dr. Veale says. “It’s beautiful to see people giving and receiving kidneys from complete strangers. The recipient usually doesn’t meet the donor until after the transplantation, and I feel extremely fortunate to often be the one who gets to make that initial introduction.”

Dr. Veale was senior author on a recent article that reported the results of 272 chain transplantations (the largest study to date). Approximately 50 percent of the chain recipients were female and 46 percent were ethnic minorities — two groups that have historically had a difficult time finding matches due to their naturally elevated antibody levels.

One of the factors driving the growth of chains is that donor surgery now is being performed laparoscopically, which is less invasive than an open surgery. In the past, donating a kidney meant being hospitalized for up to a week; most of today’s donors leave the hospital the next day. Similarly, the amount of time donors would miss work in the past was two to three months; now it is typically only four to six weeks. With shorter recovery times for kidney donors, the relationship to the recipient has become more elastic. Originally, it was just family members who were able to donate, but over the years it has become acceptable for spouses, friends and now complete strangers to donate a kidney for transplantation.

In 2011, a chain intertwined the lives of 60 strangers and involved the donation of 30 kidneys across the country; UCLA handled 16 of the patients, the largest number of any participating hospital. “The chain transplantation program is truly remarkable, as it enables us to take the gift from a single altruistic donor and amplify it dozens of times,” Dr. Veale says.