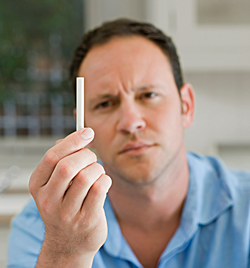 Tobacco remains among the most addictive of all substances, but effective options are now available for the estimated 46 million Americans who smoke to help them quit.

“As recently as the 1980s, the approach to quitting consisted mostly of counseling by physicians for patients to stop,” says UCLA internist Mark S. McGowan, M.D. “Now there are many effective smoking-cessation programs, as well as the introduction of nicotine replacement and non-nicotine medications, which have increased the success rates.”

As an increasing number of smokers seek help to quit, “people can work with their doctor to determine which approach is right for them,” says UCLA internist Michelle Rios, M.D.

Available treatments include nicotine replacement products, most of which are available over the counter, to help wean the body off nicotine. These products tend to fall into two categories: the nicotine patch, a bandage-like device that sustains a continuous level of nicotine in the blood; and short-acting products including gums, lozenges, lollipops, nasal sprays and inhalers that provide a quick boost to assist with cravings and withdrawal symptoms.

“The rapid spike in nicotine levels that smokers experience when they have a cigarette, characterized by a feeling of euphoria, is what contributes to the addiction,” Dr. McGowan explains.”Substituting the steady, long-acting form of nicotine can prevent any withdrawal symptoms without providing that spike and subsequent drop that leads to the compulsive behavior. The additional short-acting medication can be used as a supplement when needed to satisfy a craving.”

Two prescription medications that don’t contain nicotine have also been approved by the U.S. Food and Drug Administration: bupropion, an antidepressant, and varenicline, which eases the symptoms of withdrawal. Both are effective, Dr. Rios explains, but they can have side effects that may include an increased risk of cardiovascular disease and psychiatric effects, such as depression, disturbing dreams and suicidal thoughts. As a result, she says, patients should talk with their physician before starting these medications, and be closely monitored while taking them.

Although effective new strategies have increased the success rates among people attempting to quit, those rates are still only about 20 percent. But a relapse shouldn’t be seen as a sign that trying to quit is futile. “If you’ve tried before, statistics show you actually have a better chance of being successful,” Dr. McGowan says.

Enlisting support from family and close friends also can help in the effort, Dr. McGowan adds. Smoking-cessation programs can increase the odds of success by providing social support through the process of quitting, as well as education about strategies and discussions of the dangers of cigarettes.

Commitment remains the single most important factor in quitting. “A lot of people make the mistake of deciding to

try to quit before they’re psychologically ready,” Dr. Rios says. “It’s not as easy as just saying you’re no longer going to buy cigarettes. It’s important to analyze the reasons you smoke and what causes you to have cravings, then think about strategies for avoiding those situations,” she adds.

UCLA Health and the UCLA Health Sciences have established a smoke-free environment throughout the indoor and outdoor areas of its hospitals and health-sciences campuses in Westwood and Santa Monica. “As a renowned research, education and healthcare-delivery institution, UCLA Health must lead by example to protect the health and well-being of our faculty, staff, students, trainees, volunteers, patients and their families,” says David T. Feinberg, M.D., M.B.A., president of UCLA Health. Implementing a no-smoking policy systemwide “is the right thing to do,” he says.