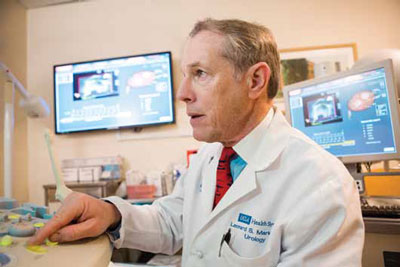 A team of UCLA expertshas introduced refinements to targeted biopsy of prostate cancer, greatly improving the ability to distinguish men who should have treatment from those who could defer. The new targeted biopsy protocol, developed by UCLA radiologists, urologists, pathologists and biomedical engineers, can permit active surveillance with a confidence not previously available. Aggressive treatment, like surgery or radiation therapy, may not be necessary for many of the 230,000 men diagnosed each year with prostate cancer. On the other hand, targeted prostate biopsy can, more efficiently than conventional biopsy, identify men who should be treated — such as those with potentially lethal cancers — allowing prompt and appropriate intervention.

Until recently, the prostate was the only organ in which biopsy was performed without clear visualization of the suspicious area. Conventional ultrasound-guided biopsy of the prostate is considered a blind procedure because ultrasound fails to discriminate between benign and malignant tissue. Nevertheless, the blind samples have for the past 25 years provided the basis for recommendations regarding treatment or active surveillance.

Targeted biopsy removes guesswork, assures the integrity of the tissue sample and offers patients and physicians the confidence of a highly accurate cancer assessment.

Targeted biopsy is possible due to advancements in MRI imaging over the past several years that have enhanced the ability to accurately visualize the tumor. The UCLA team has devised a set of parameters that produce the highest spatial resolution and clearest images, resulting in better tumor assessment and superior access to the lesion during biopsy.

The trio of assessments is reviewed by a radiologist with expertise in MRI prostate imaging. Lesions are rated on a scale of one to five to indicate the level of suspicion.

During the biopsy, 3-dimensional information derived from the multi-parametric MRI is color-coded and fed into an innovative guidance and imaging device that fuses the images with real-time ultrasound (MR-US fusion). This blending of images provides a map of the prostate and areas of suspicion for needle navigation and permits direct targeting of the lesion in question.

Moreover, lesions outside the normal catchment area of conventional biopsies can be identified. Once mapping and targeted biopsy have identified a tumor suitable for active surveillance, follow-up typically requires fewer biopsy samples than standard biopsy.

Teams from the National Institutes of Health pioneered targeted biopsy in 2009. Research at UCLA has improved image fusion technology, and UCLA clinicians have now performed more than 900 targeted biopsies — more than any other institution.

One quarter of prostate cancers are missed using standard biopsy

Approximately one million prostate biopsies are performed each year in the United States. Under standard biopsy procedures, up to 20 to 30 percent of cancers are missed. Other biopsies lead to detection of cancer that is not clinically relevant. About 75 percent of biopsies are negative, yet present diagnostic dilemmas due to chronically elevated prostate specific antigen. Targeted biopsy is a highly individualized approach that offers greater assurance that a negative result is accurate or that a positive biopsy should lead to treatment.

Targeted biopsy appears to be the most accurate assessment currently available and is particularly useful for patients with negative standard biopsy results yet continuation of elevated PSA. Other men for whom targeted biopsy is particularly important are those diagnosed with a low-grade cancer who receive a recommendation of active surveillance, explains Leonard S. Marks, MD, professor of urology, David Geffen School of Medicine at UCLA.

“The concept of active surveillance has been slow to emerge, but it’s becoming clearer that some prostate cancers don’t need treatment,” he says.

Active surveillance allows patients to avoid the pain, risks and side effects of surgery that may be unnecessary. Targeted biopsy eases the follow-up of these patients because the image coordinates are preserved for future reference, allowing tracking of any cancerous areas. Under UCLA’s protocol, patients in active surveillance undergo periodic targeted biopsy.

“Tracking of biopsy sites allows us to return, if necessary, to the same spot we were before,” Dr. Marks says.