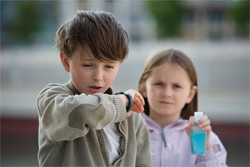 Seasonal influenza is a contagious, but preventable, respiratory illness that can be dangerous for young children. Every year, approximately 20,000 children under the age of 5 years are hospitalized because of complications from the flu, with some developing serious health problems such as pneumonia or bacterial infections. Although deaths are rare, dozens of children die from flu complications every flu season.

Hand-washing, covering coughs and using alcohol-based gels can help stop the virus from spreading, but the most effective approach for prevention is the flu vaccine, Dr. Lerner advises. Because influenza is spread through droplets in the air, children suffering from flu should stay out of school until at least 24 for hours after they no longer have a fever. Children at higher risk of developing complications (such as those with asthma) and children with severe symptoms (such as trouble breathing or dehydration) should be examined by their healthcare provider. They may receive anti-viral medications such as Tamiflu.

Unlike some viruses, influenza virus varies from season to season. While some vaccinations provide a lifetime of protection against a particular disease, a new flu vaccine is formulated every year to contain the strains expected to be most common during the upcoming flu season.

Flu vaccines are available in two forms: injection and nasal spray. The injection form, which contains inactivated virus, is approved for children 6 months and older while the nasal spray, containing live but attenuated virus, is an alternative for healthy people between the ages of 2 and 49.

Because the flu vaccine is not approved for children younger than 6 months, the best way to protect these vulnerable infants is to make sure parents, elder siblings and caregivers all receive the vaccine.

Flu season typically runs between late December and February. Dr. Lerner recommends that children receive the flu vaccine as soon as it becomes available. Rare side effects include soreness or redness at the injection site, hoarseness, red eyes, cough and mild fever lasting one to two days. The flu vaccine, however, cannot make a child sick with the flu.