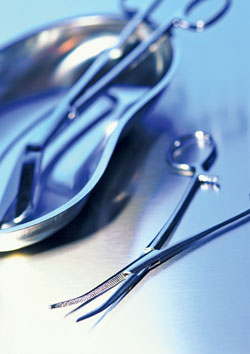 Gallstones are small, pebble-like substances that develop when bile –  composed of water, cholesterol, fats, bile salts, proteins and waste – stored in the gallbladder hardens into pieces of stone-like material. Gallstones are relatively common; approximately 10 percent of people older than 40 have gallstones. But most patients will never develop symptoms.

“If gallstones are discovered without symptoms, there is a good chance that the gallbladder will not need to be removed,” says UCLA internist Peter Lefevre, M.D.

But there is not much patients can do to prevent developing more gallstones once they begin to form, and medications to control symptoms are rarely effective. Some physicians advocate limiting fat intake, increasing dietary fiber, exercising regularly and losing weight to prevent symptoms from becoming a nuisance, but such measures have not been proven in clinical trials to be useful.

Symptoms include recurrent pain in the upper right quadrant of the abdomen, which can radiate to the back or shoulder, occasional pain in the middle of abdomen and nausea that lasts for several hours, Dr. Lefevre explains. These symptoms are sometimes mistaken for reflux, indigestion, gas pain or food poisoning.

“We perform approximately 500,000 cholecystectomies in the U.S. each year,” says F. Charles Brunicardi, M.D., chief of the Santa Monica-UCLA General Surgery Group and vice chair of the Department of Surgery at UCLA Medical Center, Santa Monica. In most cases, the surgery to remove the gallbladder, known as cholecystectomy, can be performed using minimally invasive techniques and rarely has long-term side effects. Complications occur most often when the gallbladder has become acutely inflamed or gangrenous and patients need emergency treatment and more extensive surgery. According to Dr. Brunicardi, the best time to treat gallstones is between episodes.

But even the periods between episodes, which are not typically dangerous, are still cause for concern, and the recurrent pain, known as biliary colic, can adversely affect a patient’s quality of life, says UCLA gastroenterologist Eric Esrailian, M.D.

“Correctly diagnosing symptoms related to gallstones is the key to prescribing the best course of treatment,” Dr. Esrailian says. “It is important that patients discuss their symptoms in detail with a primary care doctor or a gastroenterologist before pursuing a specific treatment.