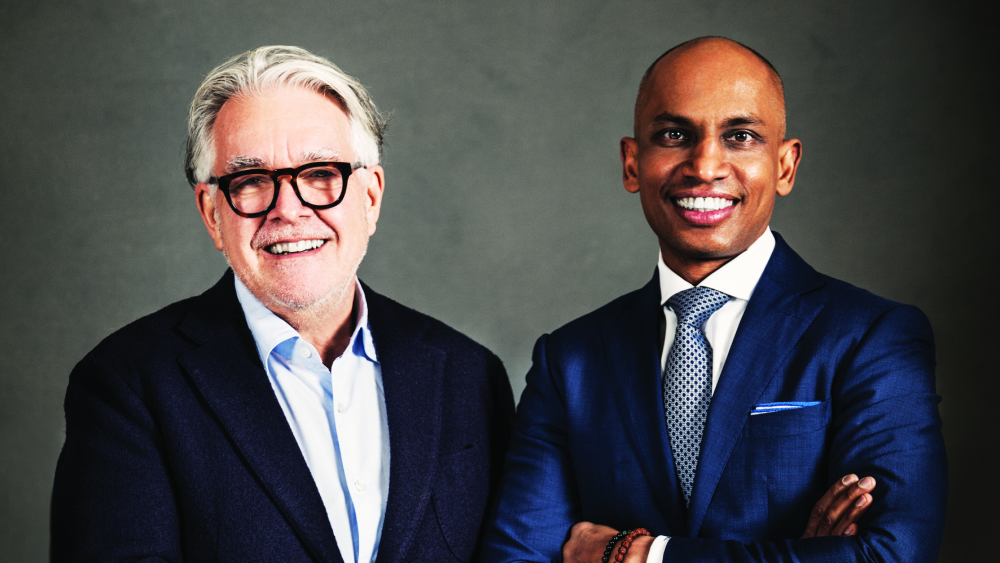 Neil B. Jacobs is the CEO of luxury hotel chain Six Senses. After a lengthy career with Four Seasons, he moved to Barry Sternlicht’s Starwood Capital Group, helping to develop brands such as Baccarat and the eco-luxe 1 Hotels. He is now steering the worldwide expansion of the wellness-focused Six Senses, including its first North American property, inside a pair of new, Bjarke Ingels–designed towers in New York’s West Chelsea. ¶ Nathan Loga is vice president, guest experience, for the luxury hotel group under the auspices of Equinox fitness. ¶ They met in 1997 when Jacobs, then the general manager at the Four Seasons in Singapore, hired Loga to work the front desk, giving him his start in hospitality.

“Nathan absolutely is a born leader, fixated on the details. He didn’t know much about the job in the early days, but he would be kind of taking control, and that managed to piss off his colleagues. Really, he was on the same level as them, so there were a lot of counseling sessions with him explaining how he needed to behave. But I used to piss people off and drive them crazy with the detail, too. At our level of the business, though, God is in the details. Once, we had a guest in Singapore talk about his favorite shop in Kuala Lumpur for a special beef dish, and Nathan sent one of the front-door staff on a five-hour bus ride there to buy some and bring it back to Singapore. That’s how you win guests for life.

“When I came into the business, I didn’t come from any history of hospitality, or wealth, or anything, really. Probably everything I managed to achieve early on was based on sheer hard work, drive and bloody-mindedness. I understood that if I was going to make something of myself it was up to me, and no one was going to do that for me, which was OK. I saw that very much in Nathan, too. He really came from nowhere, but he had that drive and passion.

“I don’t think I was ever quite as resolute and persistent as he is—he doesn’t get disheartened. At some point, for me, there was a point where I’d just let things go. Nathan would never let anything go. He’s like a dog with a bone in the nicest possible way. That is something I have great admiration for.”