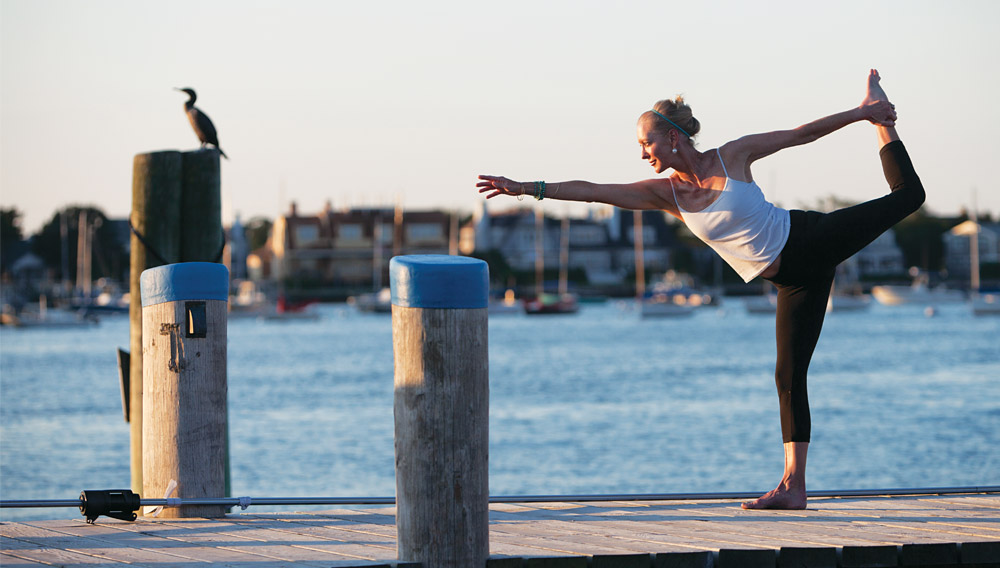 For Wendy Schmidt, maintaining personal equilibrium also means paying attention to the balance of life systems around us. “Our personal health is linked to environmental health,” she says. “To be good citizens we have to think about that relationship.” Schmidt, together with her husband, Eric, founded the Schmidt Ocean Institute (SOI), as well as the Schmidt Family Foundation, over which she presides. Her work brings her to many corners of the globe, from Nantucket to Haiti to Hamburg. Most recently she visited Hawaii, where SOI held its first symposium and celebrated the work of the scientists that she funded aboard the group’s state-of-the-art research vessel, the Falkor.

“Ocean health is a real project for me,” Schmidt says. “Between the pollution runoff from transportation and agriculture, nuclear waste from the Fukushima reactor in Japan, and the plastic gyres floating in the Pacific, our oceans are under attack. Our ship passed through a gyre and brought some on board. Small pieces of plastic absorb toxins such as DDT and PCBs in high concentrations and then get eaten by fish mistaking them for food.”

To battle the strain humans have placed on the environment, Schmidt knows she has to stay both mentally and physically fit. For her, fitness is integral to her day. Even when traveling, she tries to stay in motion. “Every morning I get some kind of exercise,” she says. “Swimming, a four-mile walk, yoga, tennis. It sets me up for the day. Then I get into the work.”

Schmidt takes Pilates classes two to three times each week with a classically trained teacher, and she enjoys the intellectual effort of it as much as the physical. “There’s a wonderful intelligence about it,” she says. “Every movement is thoughtful as you’re isolating specific muscles. I have a different way of feeling my body now—an awareness.” Schmidt has long been a yoga devotee and enjoys the consciousness of feeling each arm or leg while in a pose. She believes that Pilates builds on that muscular awareness, and takes it to the next level. Both practices allow her to calm down and settle into her body. “And they’re both very much about the mind,” she says.

Schmidt also tries to meditate for 20 minutes each day. “It de-stresses me and centers my mind,” she says. As does one of her other passions, sailing. “When you helm a boat, it both centers and frees your mind at the same time. You come out of it rejuvenated.” She sails from her home base in the Bay Area in several regattas a year, and when she is on Nantucket during the summer months, she sails almost daily. It was there in 2011 that she was the first female skipper to win the Opera House Cup with Equus, her 46-foot wooden sailboat. Last year she sailed her other boat, Selene, an 80-foot Swan, in the Maxi class at the Les Voiles de St. Barth regatta and also came in first. She practices yoga on deck before a race. “It gets me limber and strong and prepares me for the focus I’ll need, helping me to be in the moment every minute of the race.”

Schmidt works every day: “I don’t distinguish between weekends and weekdays,” she says. “And the worst day for me is when I have to sit all day. I need to engage in something physical just to balance all of that mental work.” Nearly every aspect of her work focuses on the health of the environment in some way. Her 11th Hour Project centers on climate and renewable energy research, including ways to make sailing “cleaner and greener.” Her work on Nantucket includes supporting sustainable community development, and much of her work provides grants for scientists doing urgent work in all of these areas as well as ocean health. With declining grants from the National Institutes for Health, Schmidt believes the private sector must step in to fill the gap.

Even the books on her nightstand table support her mission for a healthy planet and a balanced self—Michael Pollan’s Cooked is the most recent. “I think it’s very important that we begin to know where our food is coming from and make decisions as consumers about what kind of a food system we want to support,” she says. For her, that means fresh, not pre-packaged, food, as well as certified organic produce, meats, and fish sourced sustainably. She tries to favor restaurants that use similar ingredients and limit our exposure to fertilizers, pesticides, and stabilizers. “We can’t exploit the natural resources of our planet—including the oceans, soils, animals, and people—and expect to live in a world that supports our health,” Schmidt says. “We should remember, in the scheme of things, humans are the weak link. The systems of the planet don’t need us; we need them.”