In the wake of the intensifying Covid-19 pandemic, many of the world’s most venerable art institutions have been forced to temporarily shut their doors. Luckily, that doesn’t mean that we’ve lost access to the countless treasures housed by these great museums. Thanks to the extensive Google Arts & Culture project, more than 2,500 spaces from around the world are accessible online, and many offer virtual tours of their holdings. Here are 14 of our favorites.

Founded in 1929, the Museum of Modern Art was the first museum dedicated to collecting and presenting art from the modern era. The institution’s holdings showcase some of contemporary art history’s most famous paintings, from the likes of Van Gogh and Picasso. Google may only present 129 of those artworks, but they are some of the world’s most notable, including Henri Rousseau’s The Dream, Van Gogh’s The Starry Night, Cézanne’s The Bather. 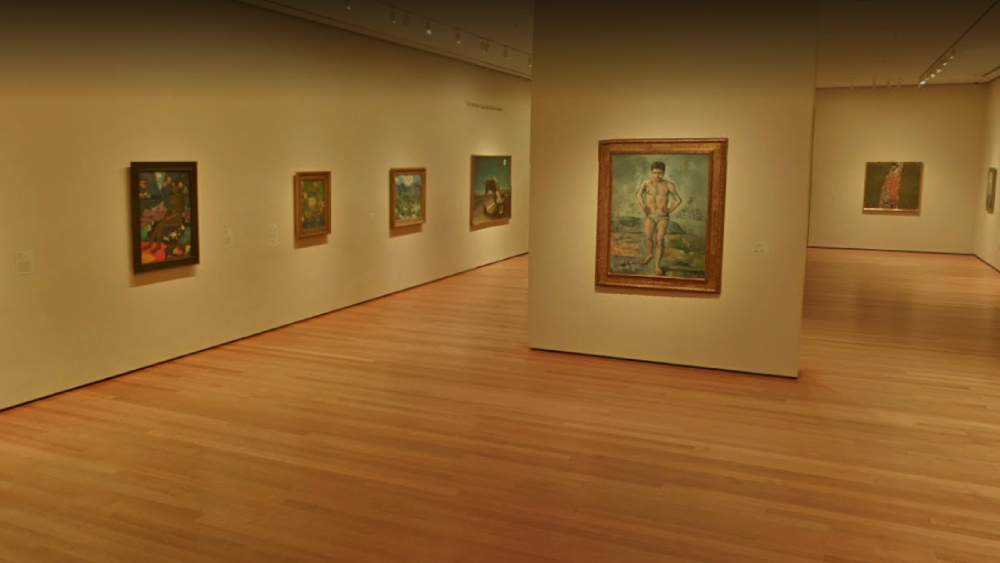 A virtual look at one of MoMA’s galleries.  Courtesy of Google

A staple of Paris’s art scene, the Musée d’Orsay was built in 1900 in a former railway station and has since focused its collection on art from 1848 to 1914. Peruse the virtual exhibition and 278 other pieces on Google, which include Van Gogh’s Bedroom in Arles, Degas’s The Ballet Class and Millet’s Gleaners.

Designed by Giorgio Vasari in 1560 for a member of the powerful Medici family, the Uffizi Gallery is a standout even among Florence’s many storied institutions. Built over centuries, its holdings include some of Italy’s most important works from artists like Caravaggio (Medusa) and Raphael (Madonna of the Goldfinch). You can peruse 156 of them virtually.

Featuring works from the eighth through to the 21st century, The J. Paul Getty Museum houses its collection in one of Los Angeles’s most striking buildings, with sweeping views of the city. Though visitors may not be able to appreciate either of those features in person, Google allows you to view nearly 16,000 pieces from the museum’s extensive holdings, including Rembrandt’s Rembrandt Laughing, Renoir’s La Promenade and Van Gough’s Irises. 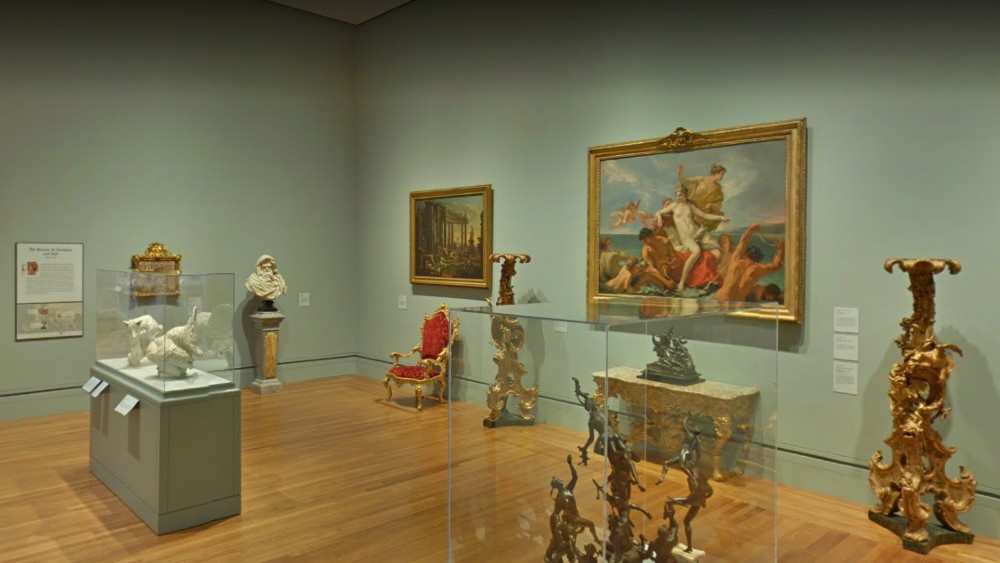 A virtual look at one of the Getty Museum galleries.  Screengrab

The National Museum has been India’s premier museum since opening its doors in 1949. Today, it is home to thousands of works of art spanning 5,000 years of history, including painting, sculpture, jewelry, ancient texts, armor and decorative arts. Over 600 of those items are documented for viewing online.

The Art Institute of Chicago

Home to one of the largest permanent collections of any museum in the United States, The Art Institute of Chicago houses 260,000 pieces of art from across the centuries. Nearly 600 of those works are made accessible digitally through the Arts & Culture initiative, including Mary Cassatt’s The Child’s Bath, Cézanne’s The Basket of Apples and Julia Margaret Cameron’s portrait of Julia Jackson.

A singularly American artist, Georgia O’Keefe famously lived her later years in the New Mexico desert, where the museum dedicated to her remains. The organization behind the institution advocates for the advancement of her legacy and also cares for many of O’Keefe’s paintings, 30 of which are viewable online, including Above the Clouds 1, Autumn Trees-The Maple and Two Pink Shells.

One of the Midwest’s artistic crown jewels, the Detroit Institute of Arts houses an incredible collection––one of the top six in the United States––under its Beaux-Arts roof. Among its most notable holdings accessible online are Frida Kahlo’s Self-Portrait on the Borderline Between Mexico and the United States, Caravaggio’s Marth and Mary Magdalene, and Ruysch’s Flowers in a Glass Vase.

Arguably America’s premier museum, the Metropolitan Museum of Art is a New York icon with one of the most celebrated collections anywhere in the world. Twenty-six virtual exhibits and over 200,000 documented works give digital viewers a taste of pretty much any art from nearly any era, from Pieter Bruegel The Elder’s The Harvesters to Chanel’s iconic suit. 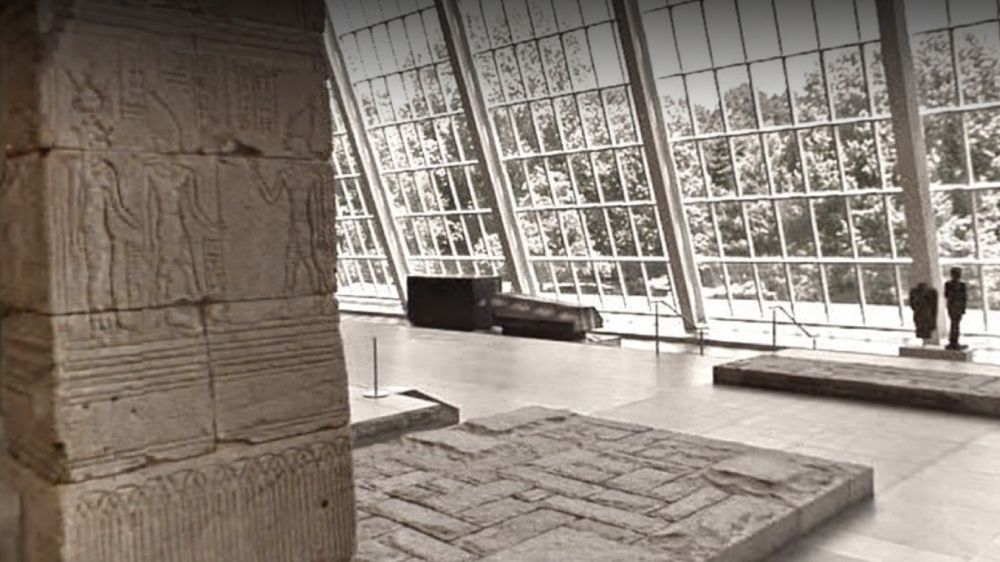 A view from The Met’s famed gallery featuring The Temple of Dendur.  Courtesy of Google

La Casa Azul is where acclaimed artist Frida Kahlo lived and died. It is also home to the museum honoring her life and artistic legacy. Nearly 70 examples of Kahlo’s personal effects, artworks and attire are accessible digitally, including the body cast she famously painted while ill and Self-Portrait Wearing a Velvet Dress.

One of the UK’s most respected museums, the Tate was opened in 1897 and has built perhaps the foremost collection of British art dating back to the the Tudor era and including a large holding of J.M.W. Turner’s work. Two-hundred and seventy works of arts––from Dante Gabriel Rosetti’s Proserpine to Millais’s Ophelia––are available through Google. 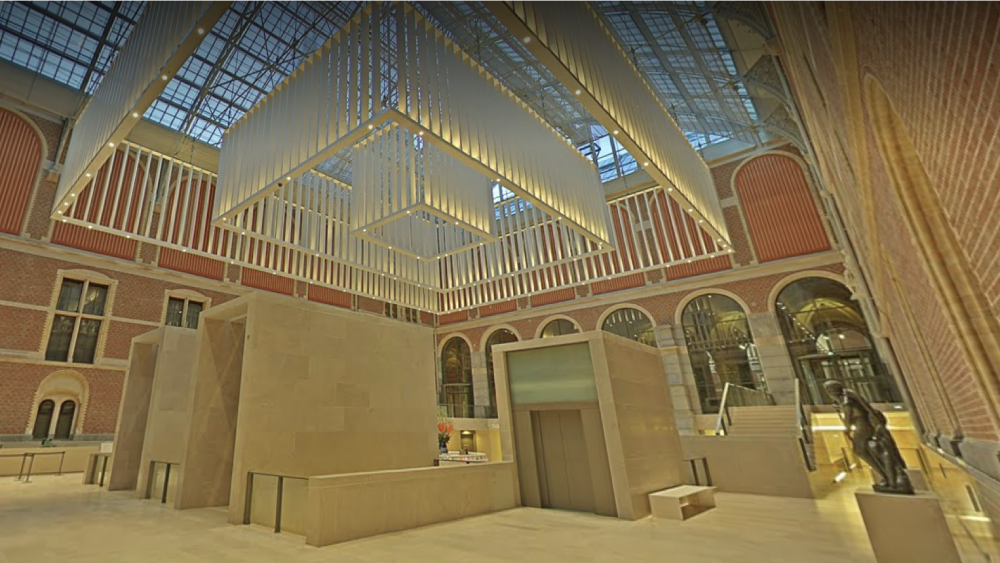 A view of a gallery in Amsterdam’s Rijksmuseum.  Courtesy of Google

If Vermeer or Rembrandt ranks among your favorite artists, Amsterdam’s Rijks Museum is a must. A whopping 164,511 pieces of artwork from the revered institution are available for viewing in high-definition via Google’s platform. Notable examples include Vermeer’s The milkmaid, Rembrandt’s Self Portrait and Verspronck’s Portrait of a Girl Dressed in Blue.

Founded in 1937, the Guggenheim is among the world’s foremost institutions dedicated to fostering an understanding of contemporary art and architecture. Over 200 works from its impressive holdings are viewable through Google’s portal, including Glenn Ligon’s Prisoner of Love #2 and Julieta Aranda’s Two shakes, a tick and a jiffy.