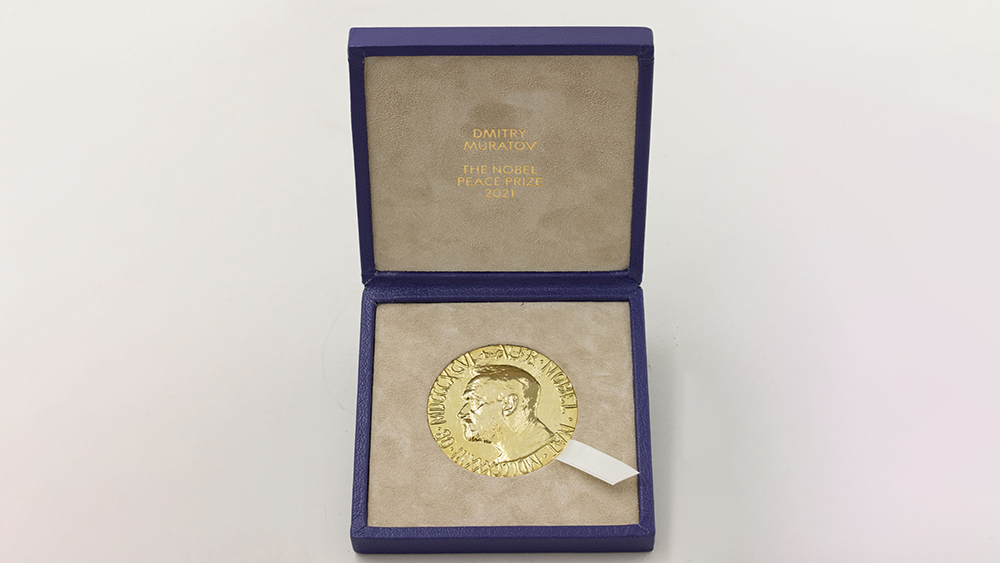 It’s unlikely that many of us will ever be awarded the Nobel Peace Prize, but now you have the rare chance to buy one—with all proceeds benefiting a good cause.

Dmitry Muratov, the editor in chief of independent Russian newspaper Novaya Gazeta and the recipient of the 2021 Nobel Peace Prize, is auctioning off his medal to help Ukrainian children and families displaced by Russia’s invasion of that country. Heritage Auctions kicked off the bidding on Wednesday, Children’s Day in Ukraine, and the final total will go toward UNICEF’s humanitarian response to the crisis.

“The effort to help those directly affected by this conflict is a worldwide appeal,” Jim Halperin, the co-chairman of Heritage Auctions, said in a statement. “Our role is to support courageous leaders such as Dmitry Muratov and his colleagues as they find inventive tactics for bringing relief to children hurt by this war.”

The edge of the medal is engraved with “Prix Nobel de la Paix.”  Heritage Auctions, HA.com

The United Nations High Commissioner for Refugees estimates that more than 6.8 million Ukrainians have fled the country since Russia invaded in February. Another 8 million remain displaced in Ukraine.

“This editors of Novaya Gazeta decided it was necessary to help those in desperate need,” Muratov said in a statement. “Everyone understood that we had to help, and the sale of the Nobel medal through Heritage Auctions gave us a powerful opportunity to help Ukrainian refugees. We hope that everyone around the world supports us and contributes to this movement, however they can.”

Muratov co-founded Novaya Gazeta, the last independent newspaper in Russia, in 1993. Last year, he was awarded the Nobel Peace Prize alongside the Filipino journalist Maria Ressa. The Nobel Committee noted their “fight for freedom of expression in a world in which democracy and freedom of the press face increasingly adverse conditions.” In late March of this year, however, Muratov was forced by the Russian government to suspend publication of his paper.

When announcing his decision to auction off his Nobel medal, Muratov noted the precedent set by the physicist Niels Bohr, who sold his Nobel Prize in Physics in 1940 to support Finnish relief. The Norwegian Nobel Committee even stated its approval of Muratov giving away his medal. And Heritage Auctions itself has a history of selling Nobel Prizes: In 2017, the auction house sold Francis Crick’s Nobel for $2.27 million.

“A Nobel Prize gives you an important world stage and microphone,” Muratov said. “It doesn’t guarantee you safety, but it allows you to be heard. The message we must convey is that there is a war going on, and we need to help those who are suffering most right now.”

The current bid for Muratov’s medal is $340,000, but the auction doesn’t close until June 20, World Refugee Day, so there’s still plenty of time to get in on the action—and lend some support to Ukrainians.