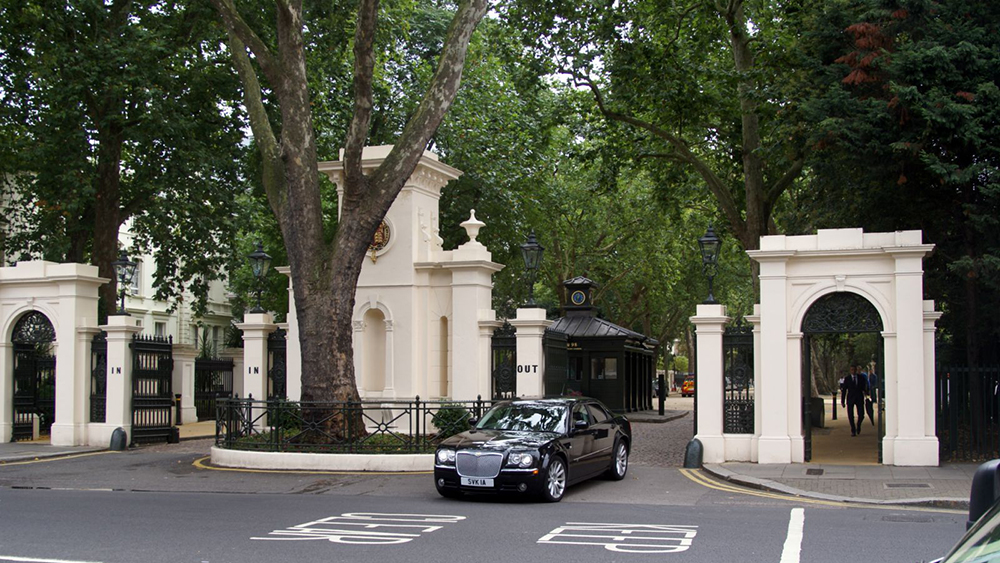 A Christmastime jewel heist sounds like the ideal setup for a sweeping action film. Throw in a luxurious private residence owned by a famous heiress as the setting and the screenplay practically writes itself. But a recent robbery in one of London’s toniest neighborhoods wasn’t conducted on a soundstage, but rather a carefully orchestrated true crime that is sure to keep the town buzzing through the holiday season.

In a new report in Forbes, every moment of the crime reads like a thriller. The 57-room mansion in question located at No. 8 Kensington Palace Gardens––a home directly across the street from Kensington Palace, the home of William, Kate and brood––belongs to Tamara Ecclestone, the Formula 1 heiress, and her husband Jay Rutland. Both of their dressing room safes were cracked and $67 million worth of precious jewelry was nabbed, including one bangle from Cartier worth $107,000 alone.

Jay Rutland and Tamara Ecclestone at an event in 2017.  Richard Young/Shutterstock

Tamara Ecclestone, one of Bernie Ecclestone’s three daughters, is frequently documented wearing many of her prized gems, and it’s suspected that whoever participated in the caper didn’t have to search far to gather an inventory of sorts. In that aspect, this case is not dissimilar to Kim Kardashian’s Paris robbery in 2016.

Adding to the intrigue is the manner in which the theft took place. The residence is enormous, and the theft happened in a relatively fast 50 minutes or so, which means it’s likely the thieves had some familiarity with the place. This one-hour interval was crucial as it is nearly the exact amount of time between the first and second security sweeps conducted each night. An in-house security guard discovered the thieves as the second of the two sweeps occurred and they were able to flee, though more specific details have yet to surface.

Rutland standing in front of the couple’s home in 2018.  Shutterstock

Because the home is in such an exclusive neighborhood and only a stone’s throw from a royal residence, the security is fairly robust. The entire surrounding community is gated with patrolled streets which theoretically protect its affluent residents––a roster including billionaire moguls Roman Abramovich and Len Blavatnik. However, as the investigation notes, though the front of the Eccelstone manse is heavily guarded, the back garden abuts the Victorian church St. Mary Abbots, which sits at the end of a quiet residential lane. Could it have provided a discreet point of entry for the burglars?

The case is far from solved, but we’d venture to guess its third act will be no less exciting.