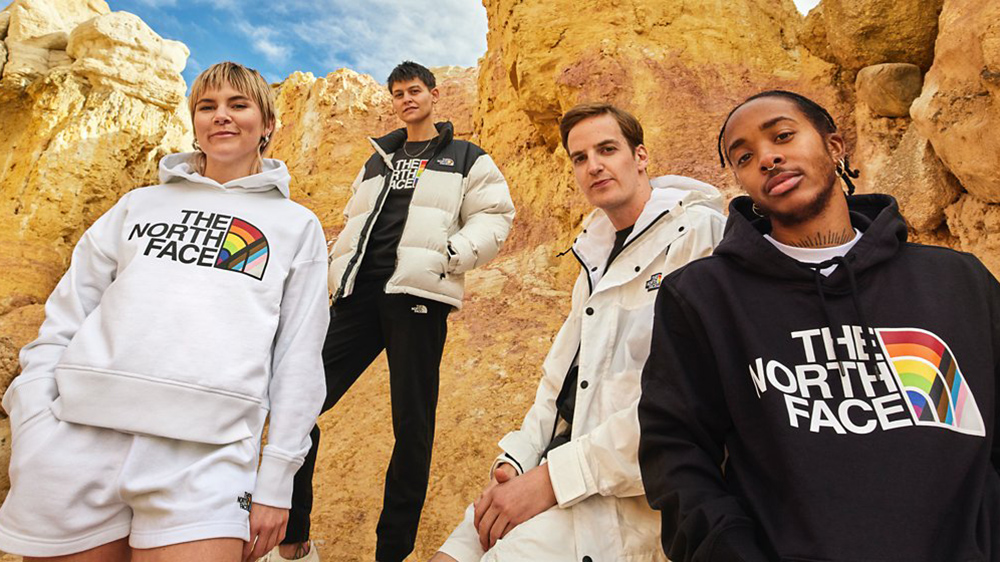 We’ve come a long way since the Stonewall Riots in 1969, but 2022 has been a reminder that the fight for equality and inclusion is not over. In February, Florida passed its controversial “Don’t Say Gay” bill, which makes it illegal for teachers to talk to their students about sexual orientation or gender identity. And according to the Human Rights Campaign, the United States is also on pace to pass more legislation passed targeting transgender youth than in any year prior. These developments make it vitally important that those with power and influence, whether they be public figures or corporations, draw attention to the ongoing plight of the LGBTQ+ community.

In honor of Pride Month, we’ve assembled a list of companies and detailed how they are actively supporting LGBTQ+ organizations that provide support, education and housing for the diverse community.

For 2022, Todd Snyder has teamed up with leading transmasculine artist Xavier Schipani for a special “Art of Pride” sweatshirt. All the profits from the camouflage-patterned garment will go to Visual AIDS, a non-profit that combats AIDS by provoking dialogue and supporting HIV-positive artists. The fashion label will also donate $10,000 to the Sylvia Rivera Law Project, which works to ensure that all people are free to self-determine their gender identity, regardless of income or race.

This year, the French fashion house will donate 15 percent of sales from all pieces in its Pride 2022 series to OutRight Action International, an organization working to defend the rights of LGBTQ+ people worldwide. The collection includes oversize tees, hoodies, caps and slides that remix the gender symbols usually found on bathroom doors.

The North Face wants to help you show your support for the LGBTQ+ community this year. The outdoor clothing giant has just released a special capsule collection featuring some of its best-known items with a Pride-themed version of its logo, like the retro puffer and hip pack. The company has also pledged to donate $100,000 to Brave Trails, a group that hopes to inspire LGBTQ+ youth to find belonging in the great outdoors.

A year after working with on a Pride collection with Lady Gaga, Versace is teaming up with another icon: Cher. The “Believe” singer has joined forces with the label to design a special collection called “Chersace” that includes Pride-themed shirts, caps and socks. A portion of the proceeds from the items, which range in price from $125 to $3,335, will go to Gender Spectrum, a non-profit group that provides support for the LGBTQ+ community, especially youths and families.

The venerable lifestyle brand has been showing its support for LGBTQ+ people for over three decades now. In 2022, it’s continuing to do so by amplifying voices from within the community in a special video campaign. The company has also brought back its “Polo Pride” collection and is again partnering with the Stonewall Community Foundation to provide donation support.

This year, Nike is releasing a special “Be True” collection for Pride. It features apparel and limited-edition sneakers, including Pride-themed versions of two of its most iconic silhouettes—the Dunk and Cortez. In addition to the collection, Nike has recommended $625,000 in grants to 18 organizations advocating for and advancing the LGBTQ+ community, including The Out Foundation, North American Gay Amateur Athlete Alliance and You Can Play.

Bloomingdale’s knows just how important the right item of clothing can be. That’s why the luxury department store has again teamed up with Emil Wilbekin’s Native Son for a limited-edition collection of self-affirming t-shirts. The tees, which come in either black or white, are meant to help all members of the LGTBTQ+ community feel like they belong.

Brooks Brothers is back with another capsule collection to show its support for the LGBTQ+ community. A Pride-themed t-shirt and pocket square make up this year’s edition. All proceeds from the collection will go to GLSEN, a non-profit dedicated to ensuring LGBTQ+ students can learn and thrive in school, free from bullying and harassment. The preppy stalwart has guaranteed the group a minimum donation of $25,000 from the partnership.

Cos is releasing a limited-edition “Love For All” capsule collection for Pride 2022. The three shirts that make up the series were designed in collaboration with model Kai-Isaiah Jamal, artist Zipeng Zhu and actor SOKO. Better yet, 100 percent of the proceeds from each tee will be donated to The Trevor Project, with Cos having committed to a minimum donation of at least $50,000.