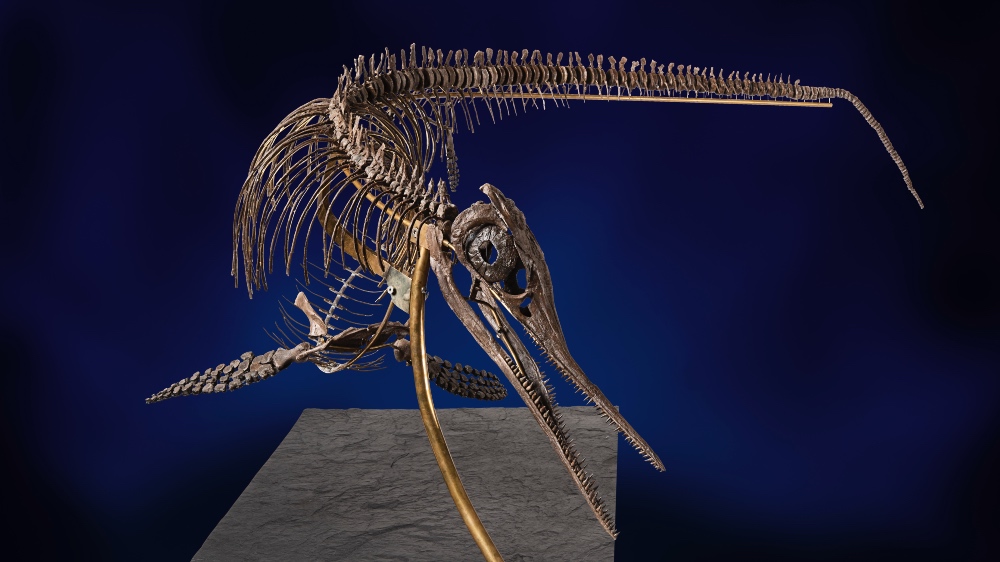 Another prehistoric find is now up for grabs—this time in the City of Lights.

Adding on to the recent slew of dinosaur auctions, a rare three-dimensional 180-million-year-old Ichthyosaurus Stenopterygius Longifrons will be up for sale next week as part of Bonhams Cornette de Saint Cyr’s latest event in Paris. One of the world’s most revered and oldest auction houses, the company is gearing up to host its second Natural History event, where buyers will haggle for the exceptional dino and other pristine fossils.

The remains in question were discovered in France and include a preserved skull from the Mesozoic-era creature, along with a few teeth and a sclerotic ring. The skeleton is nearly 80 percent complete, with its pelvic bones, pubis, hind limbs and the ischium all present from the evacuation. The dinosaur has also hung on to 65 percent of its original phalange, ulna, humeri and shoulder girdle. Auctioneers expect the expectational historical find to fetch a pretty penny at the sale, with estimates ranging from $420,000 to $630,000 (€400,000 to €600,000).

“Some of the best-known specimens tend to be flattened in mud-rock deposits, so it is quite rare to find an example, like this one, where the skeleton is not only well-represented but the bones are preserved in three dimensions,” Professor David Norman, curator of the Sedgwick Museum, Cambridge, says in a statement.

The Ichthyosaurus shares some traits with a dolphin, as both creatures have the same physiognomy and similar birthing techniques. But—before you think you’re purchasing an ancestor of Flipper—researchers have concluded that the dinosaur descends from land-dwelling reptiles.

Over the past year, several relics have come to auction, mainly of the iconic Tyrannosaurus rex, with a skull of the famous creature set to hit a Sotheby’s auction on Dec. 9. (And a T.Rex skeleton from Christie’s was recently pulled from its lot after researchers were concerned about the number of replicated bones.) But not everyone has been happy about the prehistoric remains being up for grabs just for private collectors, as the scientific community has argued that, given the cultural value of the skeletons, they should reside in a museum for public viewing.

Other lots featured in Bonhams’s Natural History event include a 260-million-year-old Permian shark found in Germany, an Ammolite with a rare matte coating from Canada and a large tooth from the most famous—and largest—shark known to man—the megalodon shark, found in South Carolina. If you’re looking to add a piece of history to your collection, the event takes place on December 13.