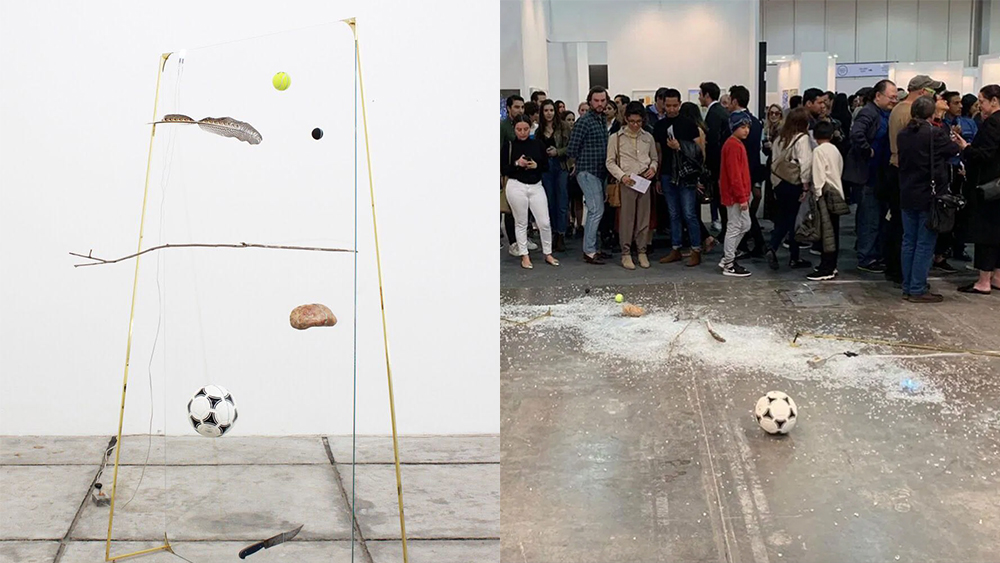 Don’t call it a smashing success. On Saturday at the Zona Maco art fair in Mexico City, art critic Avelina Lésper shattered a glass portion of a sculpture by Gabriel Rico. Some of the details surrounding the incident are unclear, though the damage is not: photographs of the sculpture after Lésper visited the booth show the floor covered in shards.

A representative for OMR, the Mexico City gallery that brought the work to the fair, told ARTnews that the accident occurred after Lésper attempted to place a Coca-Cola can on Rico’s piece. The work is titled Nimble and sinister tricks (To be preserved without scandal and corruption) I (2018), and it featured a tennis ball, a knife, a long twig, a feather and other assorted objects elegantly encased in a sheet of glass. It had been valued at $20,000.

In a statement, OMR said, “Although it seems to have been accidental and is irrelevant as to how it happened, the action of Ms. Lésper of getting too close to the work of art to put a can of soda on it and take a picture to make a criticism, had undoubtedly caused the destruction, and is above all, a huge lack of professionalism and respect.”

Shortly after news of the mishap went viral on social media, Lésper took responsibility, saying in a video posted by Milenio, a Mexican outlet that has regularly published her writings, that the work had somehow responded to her own thoughts on it. “It was like the work heard my comment and felt what I thought of it,” she said.

Rico, whose tenuous assemblages of everyday objects recently appeared in the 2019 Venice Biennale, said in a statement sent to ARTnews, “I am sad because this was very disrespectful for the pieces. This is a regrettable situation.”

Taste Test: This Blended Whiskey Was Made to Advance Diversity in the Spirits Industry. Is It Actually Good?