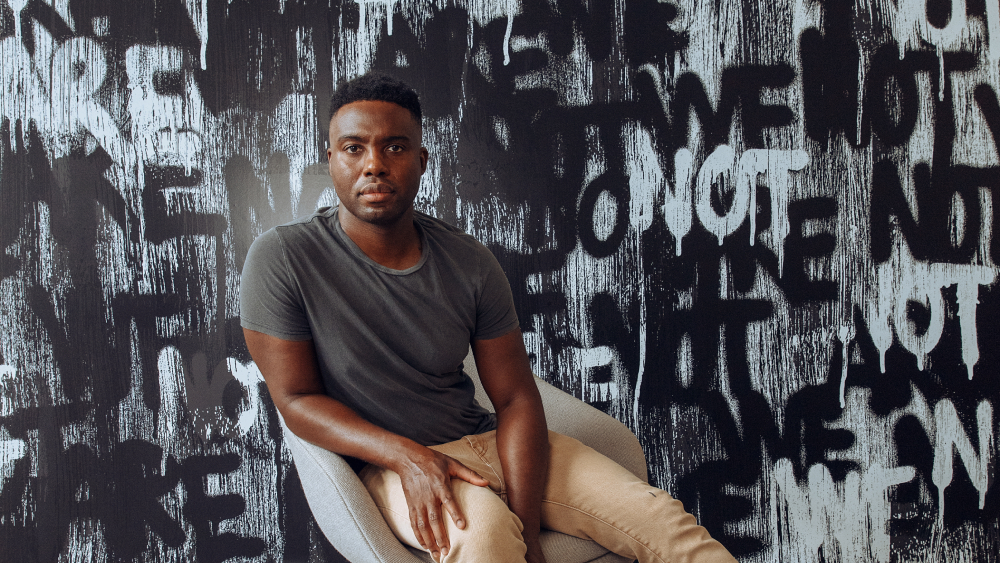 Back in March, as New York City began to empty, conceptual artist Adam Pendleton left Brooklyn for Germantown, N.Y., his longtime Hudson Valley retreat, which, he says wryly, “I value for its lack of going-on-ness.” He commandeered an empty room for a studio and spent a few weeks adjusting to the new reality. “Then I just found a different rhythm,” he says. “We’re a very adaptable species.”

Hunkered down there and occasionally zipping back to Brooklyn, the 36-year-old finished more than half of the pieces slated for his first show at David Kordansky Gallery in Los Angeles, opening November 7, which will include a video, paintings and silk-screen collages on Mylar. The paintings share both his signature motif of spray-painted text and the title Untitled (WE ARE NOT). Those three words appear on every canvas, but they’re frequently off-kilter—out of order, overlapping or cut off. The idea, Pendleton says via Zoom from Germantown, is to “complicate theories and notions of representation.” Words, he says, are where abstraction and representation meet.

The phrase “we are not” comes from the “Black Dada” essay that Pendleton wrote in 2008 and that continues to inform much of his work. In the text, which examines Blackness and the avant-garde, he lists traits that “we are not,” including “naïve” and “exclusive.”

“Defining yourself by not what people say you are—it’s really up to the viewer to fill in that space,” he says. But while those viewers are oft inclined to read his commitment to a sparse palette of black, white and gray as a political statement, Pendleton insists it is “not connected to race.”

Pendleton’s go-to painting method involves brushing on pigment and spray-painting words, which he then photographs, layers and prints onto the canvas. “I love that I can’t always control how much paint comes out, so I end up with these drips and splatters, these beautiful mistakes,” he says. “These errors are what make the image worth looking at.”

Pendleton at work in his studio.  Gioncarlo Valentine

Pendleton’s art-world breakthrough came in 2007, when, at the age of 23, he preached a charged sermon, backed by a gospel choir, at the Performa Biennial. A few years later, he joined the blue-chip Pace Gallery, becoming its youngest artist at the time. Text has been integral to his art from the beginning. In addition to painting, he was an avid playwright growing up in Richmond, Va., the son of a primary-school teacher and a contractor who moonlighted as a musician. Eventually, he says, “the visual world kind of scooped up or partnered the language. Now it’s very much one and the same.”

That partnership is apparent not only in his paintings and drawings but also in his ongoing series of video portraits, for which he pens the scripts, though he feels at liberty to depart from them. The latest, What Is Your Name? Kyle Abraham, A Portrait, 2018–19, will be on view at Kordansky. The captivating 19-minute piece deconstructs documentary-style interviews with double entendre and repetition, bordering on interrogation, to pry open the mind of the noted choreographer and dancer, while fragmented frames capture Abraham’s grace, power and artistry. “There’s something, for better or worse, that makes people always mention race when there’s a Black body involved,” Abraham says in the film. “You’ve never heard of Trisha Brown being referred to as a white choreographer,” he adds, while acknowledging that he does “feel a bit of pride” at being described as a Black one.

After the Kordansky show, Pendleton will pivot to his upcoming exhibition at the Museum of Modern Art, which was postponed during the lockdown to next September. He began the expansive piece, Who Is Queen?, about a decade ago, but he is loath to call it finished. “I wouldn’t be worth my salt if I didn’t keep working on it,” he says.

He also has a passion project in Tryon, North Carolina: the preservation of singer Nina Simone’s childhood home. In 2017, Pendleton teamed with fellow Black artists Rashid Johnson, Ellen Gallagher and Julie Mehretu to buy the dilapidated three-room house and save it from demolition. They have since partnered with the National Trust for Historic Preservation and others to restore it.

Simone was also a civil-rights activist, and Pendleton, who has made works proclaiming, “Black Lives Matter,” contributed compelling opinion pieces to both ArtNews and The New York Times at the height of the BLM protests in June. “I’m really trying to think critically,” he says, “about the past we have inhabited, the present we do inhabit and the futures we might inhabit.”