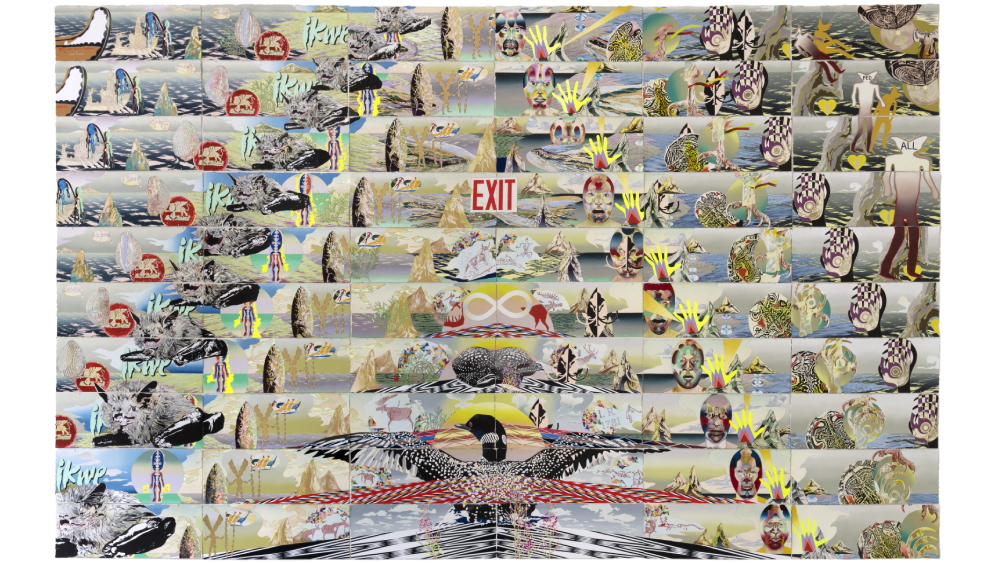 An unusual sign will be going up this month across the street from the Whitney Museum of American Art and the High Line in lower Manhattan: In place of a sexy ad for sneakers or a fragrance, a billboard will celebrate Native Americans and, in doing so, tackle the complexities of their place in the United States.

Chicago-based artist Andrea Carlson’s piece—mounted by the museum with the help of the elevated park and the luxury building providing its façade—is a busy pattern of colorful, detailed images from Native cultures, including a birchbark canoe, a hand merged with a talon, a diving loon and an upright, seemingly ambulatory Man Mound, a reference to the continent’s only surviving effigy earthwork of a human, located, as Carlson puts it, “in what is now called Wisconsin.” The title, Red Exit, is a nod to poet Gordon Henry Jr.’s tongue-in-cheek list of Native character names to avoid, which also includes Running Mascara and Waits for Bus. “There are these little bread crumbs all over the work,” she says.

Carlson, a Grand Portage Ojibwe from northern Minnesota, began incorporating themes of Native storytelling and colonial repression into her practice while double-majoring in art and American Indian studies at the University of Minnesota. Initially, she says, “I wanted to take the front door” to museums like the Whitney and “be appreciated on the same level as white men.” Now, however, laughing at the irony of her work being installed outside the museum’s hallowed galleries, she is equally interested in “spaces Native people make for themselves.”

A street view of Andrew Carlson’s work outside of the Whitney.  Courtesy of Bockley Gallery, Minneapolis

New York won’t be the only big city with a monumental outdoor piece by Carlson: Come spring, Chicago is slated to install her work on five billboards by the retail mecca of Michigan Avenue, in an area that includes a shop selling Blackhawks team merchandise, a landmark bridge featuring a sculpture of a dead American Indian, and the site of Fort Dearborn, which Native people burned down during the War of 1812. Central to the project, Carlson says, will be text reminding potentially misinformed tourists and locals alike exactly where they are: “You’re on Potawatomi land.”