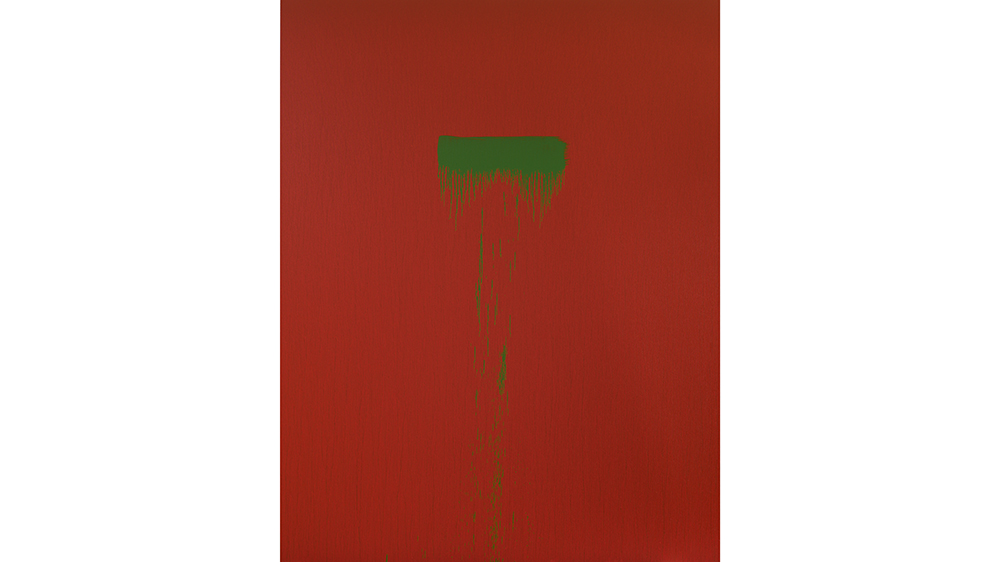 It’s the kind of soupy late-summer day in New York City that finds the vast majority of acclaimed contemporary artists happily decamped to their cool, breezy studios on Long Island or in Connecticut. But 79-year-old Pat Steir, a floral scarf draped around her, is in her Chelsea studio, surrounded by 28 towering panels. Propped against the walls, each nine-foot-tall canvas is a different color, from bumblebee yellow to deep purple. Steir is spending the final weeks of summer finishing the suite before it heads to the Hirshhorn Museum and Sculpture Garden in Washington, D.C., where it will be installed in order of the spectrum, from red to violet, in a solo exhibition, opening October 24.

When the museum approached her about a show, Steir, who calls herself a conceptual painter, considered the quirky doughnut-shape geometry of the gallery, then suggested constructing a color wheel. “There’s a huge history of color wheels, starting with Newton and Goethe,” Steir says, reaching for a German book on the subject that she has long referenced. “My color wheel is my color wheel. It’s not a copy. It’s my own discovery.”

From a distance, the gradual gradations of hue look monochromatic and opaque, almost like house paint. But up close, veins of multiple pigments peek through. “What you see is sometimes 11 layers of transparent colors,” she says. Each panel features a contrasting shade spilling down the front—red on green, for example—the result of Steir’s extra-juicy brushstrokes. The effect is a second, complementary color wheel. A onetime book designer and art director, Steir is also creating a leporello, an accordion-style book that will unfold to reveal all 28 paintings simultaneously, mimicking the circular installation.

Hirshhorn senior curator Evelyn C. Hankins is particularly intrigued by Steir’s take on the color wheel as equal parts scientific discovery and artistic expression. “It’s as much about perception of color as mapping color,” Hankins says.

It’s not the first time Steir has co-opted what’s generally considered to be an artist’s tool or technique and turned it into her primary subject. She gained fame in the 1980s with her “Waterfall” series, in which she poured, splashed and flung paint onto the canvases, evoking flowing water. “I was making the cliché, the icon, of abstract thinking—the drippy brushstroke—the image,” she says in retrospect. One minor change in her process: In those days she climbed a ladder; now she uses a lift.

In the 1960s, Steir easily landed museum and gallery shows after art school—rare for a female artist of the era—and developed close friendships with other creative lights, including artist Agnes Martin, avant-garde composer John Cage and his partner, choreographer Merce Cunningham. Influenced by Cage, she embraced chance in her paintings and also paid homage to Asian calligraphy and Taoism. “I was a young woman in the ’70s, so all that was in the air,” she says of Eastern philosophies. “I wasn’t alone in that search.”

Steir has shown steadily over the decades, but since joining Lévy Gorvy gallery in 2016, she has enjoyed a surge of renewed interest. In addition to the Hirshhorn show, which will be on view until September 2020, she recently had a much-praised exhibition of new paintings at the Barnes Foundation, designed the set for Cunningham’s centennial celebration and was the subject of a documentary film. But the quieter years don’t seem to have bothered her. “I always felt pride in my work,” she says. “I was the little girl in the front of the room who said,
‘I know the answer! Call on me! I’m really smart!’ That’s how I was about my work. I didn’t realize if people were paying attention or not. I always thought they were. Even when they weren’t.”

Check out more images of Steir’s artwork below: