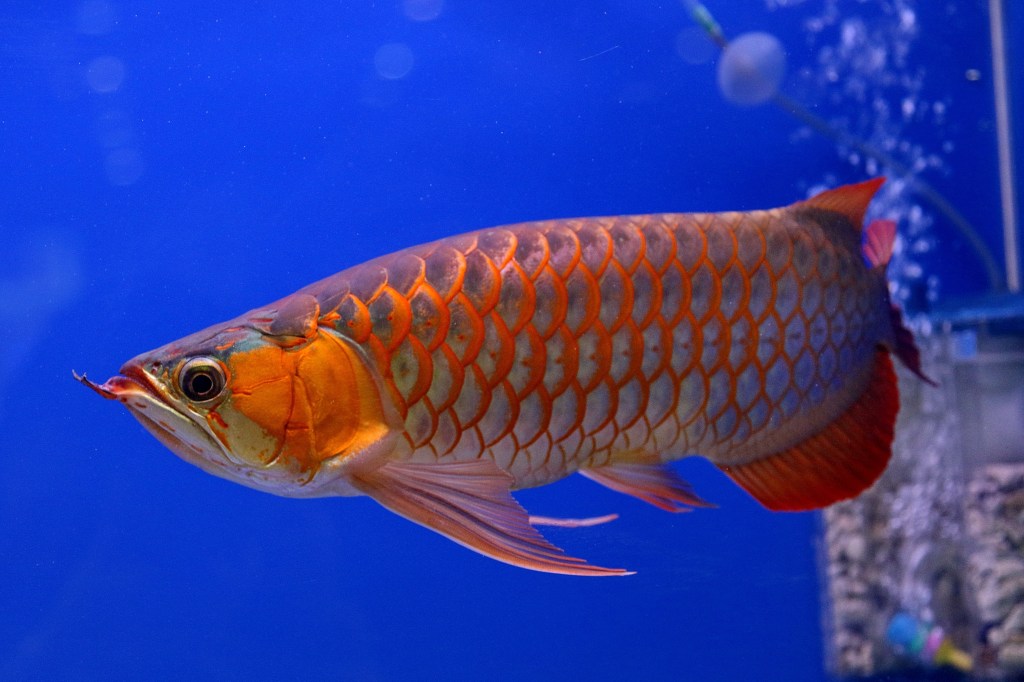 Looking for the gold standard for your aquarium? Meet the Asian arowana, the unofficial Lamborghini of the sea—and the most expensive aquarium fish in the world.

These dragonfish are particularly revered in China, where the freshwater pets are status symbols—and cost a pretty penny. Back in 2009, one was rumored to have sold for $300,000. That fish was said to have commanded top dollar as a prized albino version, and other arowanas reportedly fetch tens of thousands of dollars. (The fish’s average life span is 10 to 15 years; if you want an arowana that will last a little longer, check out this arowana sculpture—made of jade, opal, and marble—selling on eBay for $5.8 million.)

That the coveted species is endangered only adds to its intrigue (some people have been arrested for smuggling them). But that’s not the most striking fact about the arowana. These fish cause such a frenzy that sometimes they have their own motorcades for transport and their own bodyguards, according to Business Insider. There’s even a market for cosmetic face-lifts for fish suffering from droopy eyelids or needing a chin tuck. An eye lift runs a weirdly affordable $90, and a chin correction costs about $60, according to The New York Times.

“[The arowana] is a very valuable commodity, and that had driven a tremendous amount of crime around the areas where it’s bred,” Emily Voigt, a journalist specializing in science and culture, told Business Insider. Voigt’s new book, The Dragon Behind the Glass, chronicles the intrigue (murder and fish kidnappings) of the arowana and its rise to fame as one of the world’s most coveted aquatic pets. Before the 20th century, these fish were nothing special. They were considered a food source for locals. It wasn’t until the late 1960s, according to Voigt, that the fish became a sought-after commodity. By the 1980s, they were firmly cemented in Asian culture as symbols of luck and wealth.

Now the prized fish are being bred to produce unique color combinations. Chili red arowanas (pictured) go for around $1,400; emerald-violet fusion super reds run about $12,000; and the rare albinos, while less striking, command six figures. The one sold in 2009 was rumored to have gone to a Chinese Communist Party official.

If all of this has you itching to buy one of these pricey flippers, you may have to settle for a different exotic pet if you live stateside. Arowanas are banned in the United States, protected by the U.S. Endangered Species Act.