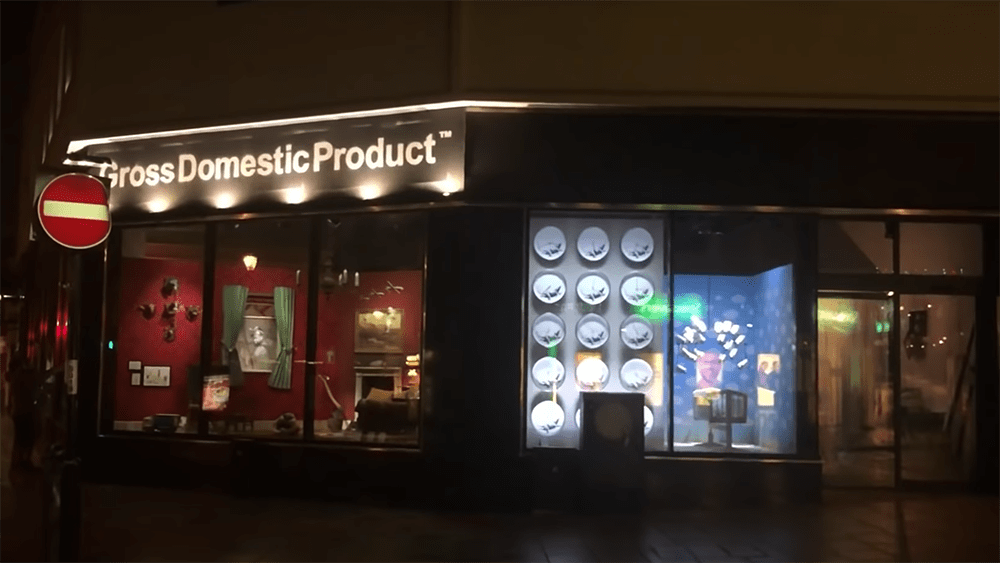 PDisco balls made from battered police helmets. Welcome mats stitched from life jackets. It’s certainly not the usual aspirational bric-à-brac you would find in a homewares store, but that’s Banksy for you. The world’s most famous anonymous artist has just launched a new pop-up shop, selling “impractical and offensive” merchandise in South London.

Gross Domestic Product, which popped-up overnight in Croydon, appears to be jam-packed with all kind of quirky wares, though it will never actually open its doors to the public. Instead, the shop will trade for two weeks, exclusively online.

In a statement about the venture, Banksy said the goal of the shop was actually a bid to keep third parties from selling fake Banksy goods. “A greetings card company is contesting the trademark I hold to my art,” the artist said. “And attempting to take custody of my name so they can sell their fake Banksy merchandise legally.”

. This showroom is for display purposes only. I’m opening a shop today (although the doors don't actually open). It’s in Croydon. Probably best viewed at night.

Basically, as the law stands, if Banksy doesn’t make his own merchandise, someone else can. Mark Stephens, an arts lawyer and founder of the Design and Artists Copyright Society who is currently advising the artist, explains: “Because he doesn’t produce his own range of shoddy merchandise and the law is quite clear—if the trademark holder is not using the mark, then it can be transferred to someone who will.”

No matter the reason for the shop, the oddities inside promise to tackle issues most closely associated with the artist’s work, such as the refugee crisis, animal exploitation and the surveillance state. They also appear to showcase his sardonic humor. There’s a gravestone inscribed with the message, “You have now reached your destination” and sofa cushions with stitching that reads: “Life’s too short to take advice from a cushion.”

If you’re eager to peruse the goods, you can check out the teaser YouTube video below.