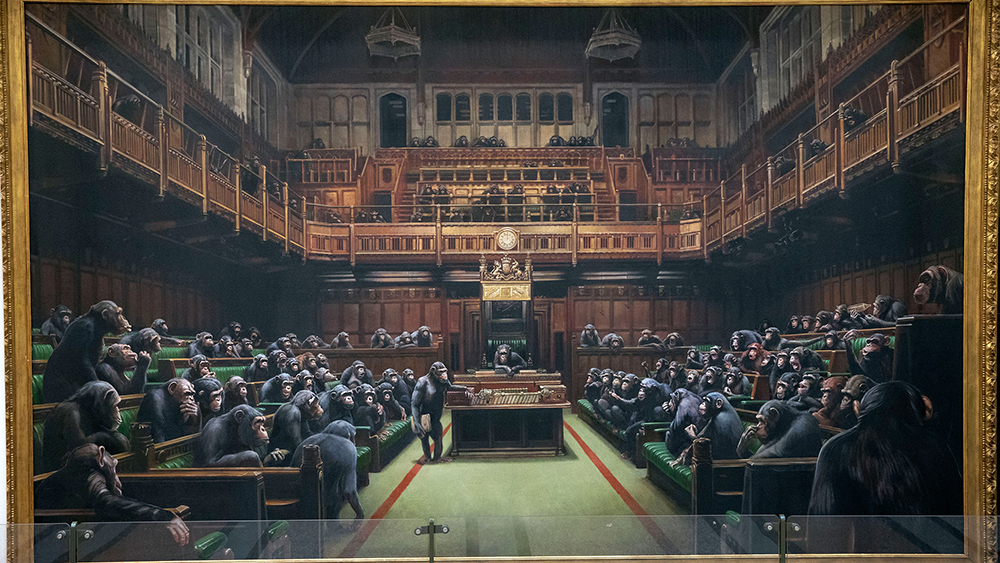 Banksy has made a living monkeying around with the line between art and politics. Now, one of the artist’s actual renditions of doltish chimpanzees could earn him up to $2.5 million (£2 million) at auction next month.

The 13-foot painting entitled Devolved Parliament depicts the House of Commons overrun by chimp MPs. The work will be auctioned at Sotheby’s London on October 3 and is expected to collect between $1.8 million and $2.5 million (£1.5 million and £2 million), which would make it the most expensive Banksy ever sold.

While the work would seem to offer a searing satire of today’s fractured Parliament, the painting is a decade old. It was first unveiled in 2009 as part of the “Banksy vs. Bristol Museum” exhibition—long before the term Brexit started to saturate political discourse. Ten years later, the painting returned to the public eye for another showing in Bristol, which was supposed to coincide with Britain’s withdrawal from the European Union on March 29 of this year.

At the time, Banksy shared the following message on Instagram: “I made this 10 years ago. Bristol museum have just put it back on display to mark Brexit day. ‘Laugh now, but one day no-one will be in charge.’”

. Devolved Parliament I made this ten years ago. Bristol museum have just put it back on display to mark Brexit day. . “Laugh now, but one day no-one will be in charge.”

Indeed, with Brexit negotiations in chaos, having already claimed one Prime Minister (and quite possibly another), the anonymous street artist’s work has never been more resonant.

“Regardless of where you sit in the Brexit debate, there’s no doubt that this work is more pertinent now than it has ever been, capturing unprecedented levels of political chaos and confirming Banksy as the satirical polemicist of our time,” Alex Branczik, Sotheby’s European head of contemporary art, told the Guardian.

Should Devolved Parliament achieve its lofty seven-figure estimate, it will dethrone Keep it Spotless (2007), Banksy’s renowned defacement of a Damien Hirst canvas which sold for an epic $1.9 million (£1.52 million) in 2008. Devolved Parliament will be on display from September 28—rather fittingly in the same room where Banksy’s self-destructing artwork appeared just a year ago—before its sale on October 3.