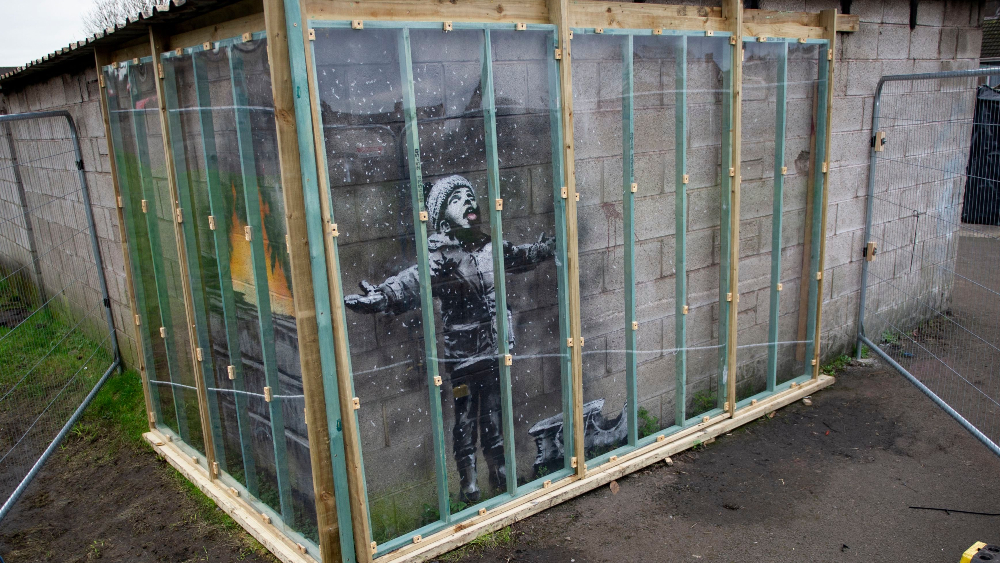 One of Banksy’s latest murals just got a new home.

Season’s Greetings, which appeared on the outside of a garage in the Welsh town of Port Talbot late last year, was transported to its new owner’s art gallery on Wednesday, reports the BBC. The move follows months of planning to figure how out exactly to transport the 4.5-ton mural from its original home in the shadow of the town’s steelworks to a venue owned by the artwork’s owner, John Brandler.

The mural suddenly appeared on two sides of Ian Lewis’s garage shortly before last Christmas. One side depicts a young boy with his arms outstretched, joyously greeting a snowfall. But like so much of the anonymous artist’s work, things aren’t as they seem, as the other side of the work reveals that the snowflakes are actually ash from a trashcan fire. When the mural originally appeared, it wasn’t immediately clear that it was a Banksy, but the artist confirmed that it was his handiwork days later, with a typically mischievous Instagram post.

Lewis sold the painting to John Brandler for an undisclosed “six-figure sum” in January. Season’s Greetings new owner promptly announced his intention to make it the centerpiece of a street art museum set to open in Port Talbot later this year, which he believes will draw as many as 150,000 visitors to the town annually.

Lewis, who called owning the mural “stressful,” said he was happy about the outcome, telling the BBC: “Whether you are for or against the steel works here, and personally I worked there for 28 years, I think people from Port Talbot feel passionate about the Banksy. I don’t think I’ll miss it, but I probably will pop in and visit it.”

Protected by fencing and 24-hour surveillance since it first appeared on Lewis’s garage, the mural was covered in resin yesterday to prevent cracking and then cut away from the rest of the garage. At that point, a crane loaded it on the back of a truck and it was transported to Brandler’s gallery further into town. While there was some trepidation that the artwork would be damaged during the move, it appeared unscathed when it was finally unwrapped.

Brandler, who has permission to show the mural for three years, said that he never dreamed of displaying the artwork anywhere but Port Talbot. “Before, when you looked over at the artwork you were seeing the pollution coming out of the chimneys behind us—that’s why it belongs here,” he told BBC. “It wouldn’t look the same in the Tate gallery, or a gallery in Mayfair, or New York or Paris. I felt it belonged here.”

Preparations to move the Banksy into the building are now taking place – it will be placed on top of the platform with wheels and rolled into the building. We are expecting the unveiling to take place at 1pm pic.twitter.com/uAvTkZefhv