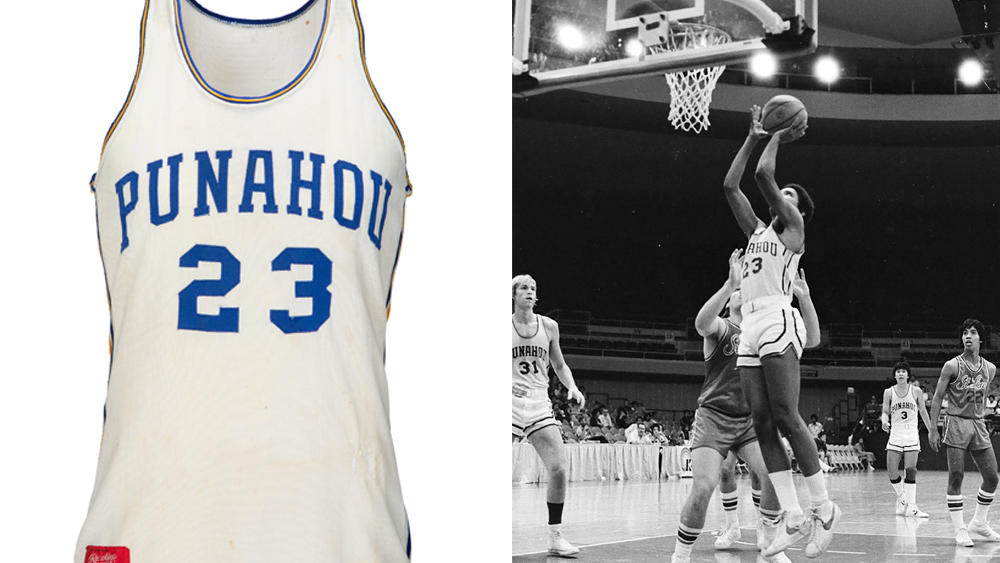 It’s a little-known fact that three of the world’s most celebrated basketball players donned the same number: Michael Jordan, LeBron James, and Barack Obama. That’s right, back in the day, the 44th President of the United States was an athletic left-handed slasher who wore the mythical number 23—albeit for a slightly lesser-known team: Punahou High School. Now, that basketball jersey is up for grabs via an online auction.

Bidding for the white-and-blue jersey—which Obama wore as a fresh-faced teen throughout the late ‘70s—started at $25,000. As of press time, the current bid is at $30,000, but Heritage Auctions estimates it could soar up to $100,000 before the auction ends on August 17.

Obama has had a long and well-documented love affair with basketball: We’ve seen him drain three-pointers; heard about his ultra-competitive games in the White House; and, more recently, read of his plans to form an official Basketball Africa League. So, a basketball jersey seems like a fitting (and quintessentially cool) way for the president to be immortalized in history.

“A strong argument could be made that this auction lot represents the most important basketball jersey that exists,” reads the Heritage Auctions website.

Hyperbole aside, there’s no denying the jersey’s unique backstory: It was saved by the consignor Peter Noble, who played for the junior varsity team three years after the former president and shared the same number. Apparently, the jersey was discarded when the school updated uniforms—but Noble grabbed it from the trash and, in turn, rescued an important (albeit sweaty) piece of the country’s history. The jersey will be accompanied by a letter of provenance penned by Noble, as well as a 1979 Punahou High School yearbook—which features some retro snaps of the ex-president wearing the uniform in-game.

But it’s not just the jersey’s serendipitous backstory that makes it special—the number that led both Michael and the King to NBA’s promised land also worked for the future POTUS: While Obama wore it, his team won the state championship in 1979.