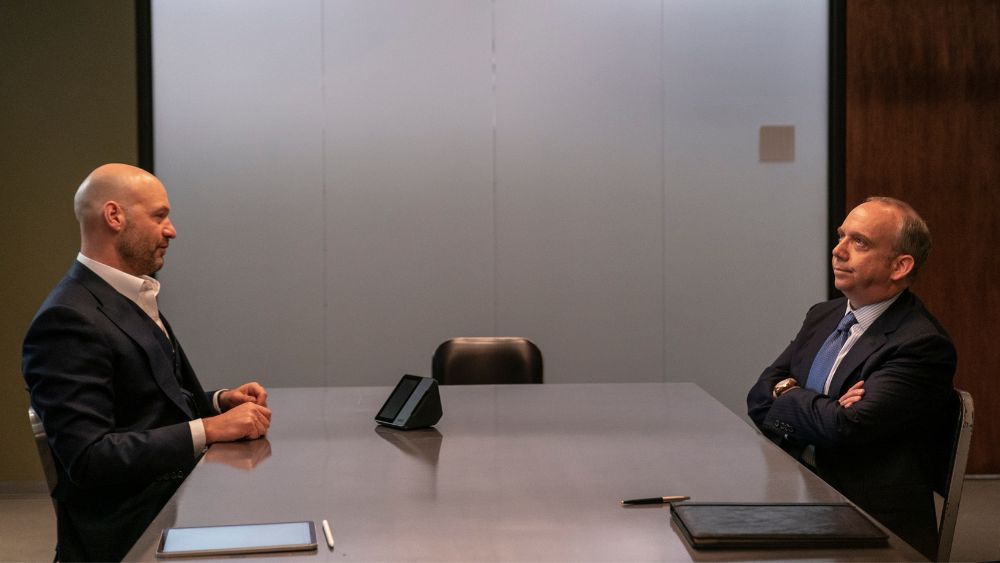 Since the series premiered in 2016, co-creators Brian Koppelman, David Levien and Andrew Ross Sorkin have famously drawn inspiration from the likes of Steve A. Cohen, Preet Bharara, Elon Musk and other one-percenters to create their morally agnostic cast of characters. Though season six ended with Chuck spending a brief time behind bars trying to take down Prince, you can bet the central power battle between the two will continue in season seven. Wealth is war, after all.

Now, as Billions gears up for its next installment, there are even more questions about how the upcoming season will unfold. It’s also fair to wonder if it will be the show’s last. For those still tuning in in a post-Axelrod era, we’ve got everything you need to know about Billions season seven, including its release date, which cast members will return and what will happen going forward.

Billions Season 7 Release Date: When Will It Air?

While Showtime has yet to announce a release date, the network officially renewed Billions for a seventh season back in February of 2022 when season six was still airing. According to past installments, which have all premiered between January, February and March (except for season five), the series is likely to return to screens in early 2023. So hopefully, the wait for new episodes won’t be long. In October, Koppelman shared on social media that the first table read of season seven was underway. A few weeks later, there were casting notices posted throughout New York City, meaning that Billions had begun filming.

You can expect the usual cast of characters to come back for season seven. That includes leads such as Giamatti and Stoll, plus other regulars including Maggie Siff as Wendy Rhoades and David Costabile as Mike Wagner. Asia Kate Dillon who plays Taylor will also be in the mix, in addition to Condola Rashad as Kate Sacker and Jeffrey DeMunn as Chuck Rhoades Sr.

Finally, don’t count Lewis out just yet. There is a chance (albeit a slight one) that we could see him reprise his role as Axe. In November, roughly a year after his exit, he was reportedly spotted on set in London alongside former co-stars Giamatti, Siff and Costabile. During a 2021 interview with The New York Times, he told the publication that “there’s an opportunity maybe for me to return. But for now, broadly speaking, Axe has been vanquished.” Hey, you never know where the hedge fund tycoon might turn up next.

Billions Season 7 Plot: What Will Happen?

The season six finale, “Cold Storage,” concluded with a victory of sorts—although it’s unclear who the real winner was. Chuck finally managed to break into one of Prince’s black boxes, exposing his wealth of untaxed cryptocurrency and simultaneously ruining his future presidential run. However, Rhoades was arrested shortly after for using a fake warrant to obtain the evidence in question. Prince’s remaining drives were then seized; however, no one was able to crack the code to see what was inside. Prince literally buckles at the fact that while he just got away with tax fraud, he also lost a whopping $3.5 billion.

“We were initially focused on hedge fund billionaires who were press shy and didn’t want to be written up for being so rich,” Levien told Forbes. “We’ve seen a shift to a more public style of billionaire who wants to influence the public discourse. That’s where Mike Prince comes from.” Setting the stage for season seven, the cat and mouse game is expected to continue now that Prince’s “good billionaire” persona has been publicly tarnished and Chuck has been busted out of jail by Dave (Sakina Jaffrey).

Will There Be a Billions Season 8?

Soon to be entering its seventh season, Billions has earned its place as one of the longest-running series in Showtime’s history. Although, with Axelrod no longer front and center, how long will the show be able to go on? And will fans still be entertained? In referencing the most recent finale, Koppelman told the Los Angeles Times, “We’re still really engaged. We love the way the season ends, and we feel it gives us plenty of runway moving forward.” And plenty of room for speculation, of course.

Where to Watch Billions Season 7

Billions season seven will be released exclusively on Showtime so if you want to tune in with the rest of the world, you’ll have to subscribe to the Showtime app. The platform offers a 30-day free trial, but after that, it’ll cost you $10.99 per month. If you’re an Amazon Prime Video member, you can also stream seasons one through four of Billions for free.