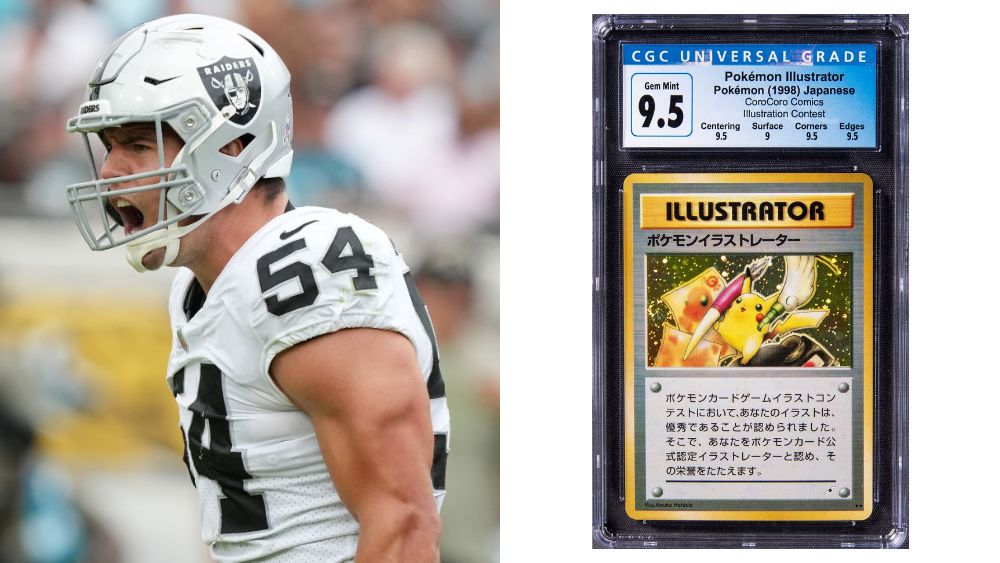 After seven seasons in the NFL, could linebacker Blake Martinez’s next role be Pokémon trainer?

The 28-year-old football player announced his retirement earlier this month after having been signed to multiple teams over the years, including the Green Bay Packers, the New York Giants and, most recently, the Las Vegas Raiders. Coincidentally, Martinez called it quits one week after he made headlines for selling an ultra-rare 1998 Pokémon Illustrator Card, which fetched a whopping $672,000 at a Goldin auction on October 29. Naturally, fans been wondering if the professional athlete has left the NFL to pursue a more lucrative career path—perhaps investing in and cashing out on trading cards.

“I’m announcing my retirement from the game of football. I had an amazing journey with some incredible franchises, and made lifelong friendships,” Martinez wrote on Instagram. “I have chosen to step away from this career at this time to focus on my family and future passions! I am excited for this new journey and appreciate all the fans and organizations that have supported me throughout the years!”

While we’re unsure if “future passions” are code for full-time Pokémon Master, we do know the Illustrator Pikachu card that Martinez auctioned off (aka the Swirllustrator) was graded at a 9.5 gem mint—a near perfect score—by CGC Trading Cards, an expert trading card verification company based in Florida. Only 41 of the collector’s items are known to exist, making them the rarest cards in the Pokémon community. This particular version also features a double swirl, which increases its uniqueness. “This card is pretty much the holy grail for Pokémon collecting. . . . This is the most iconic, the most coveted. It’s impressive to hold,” Matt Quinn, vice president of CGC Trading Cards, says.

And for Martinez, there’s plenty more where that came from. Back in March, he showed off his insane collection of cards on the premiere of Price Went Up, a YouTube series from sport entertainment brand Whistle. In the video, the former player revealed he has made $2.3 million from Pokémon trading in just one year. His most recent sale alone was worth more than double his Raider’s contract, which had a base salary of $311,110.

Looks like Martinez’s future will now be focused on trying to catch—and trade—’em all.