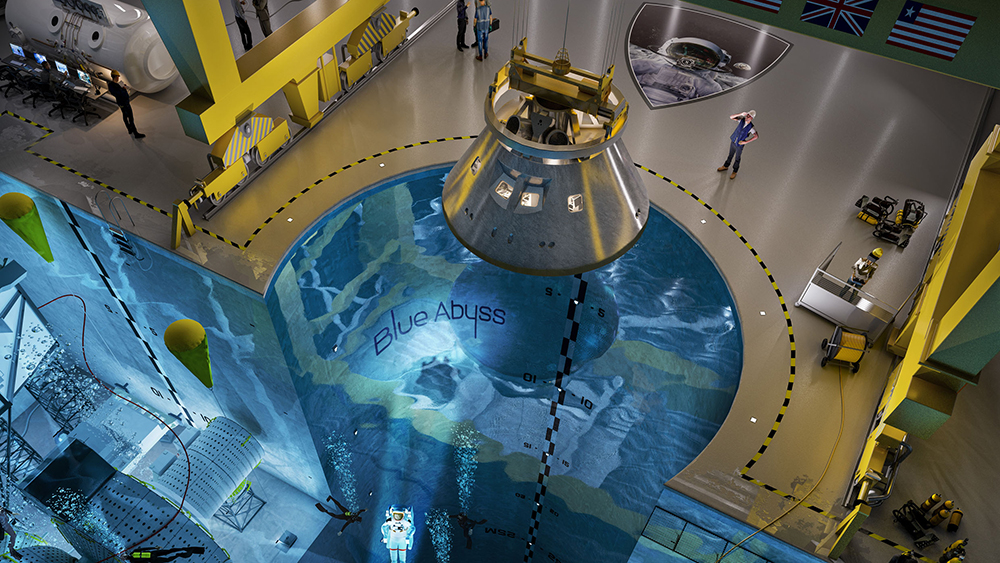 The world’s biggest and deepest pool is ready to make a splash in the UK. The epic body of water will be the centerpiece of a new $200 million (£150 million) aquatic center, known as Blue Abyss, that will be used to train astronauts and help advance undersea robotics.

The high-tech facility, which is being spearheaded by a privately funded company also known as Blue Abyss, will be situated on a 10-acre site at the Aerohub Enterprise Zone at Cornwall airport in Newquay. It will offer everything from hyperbaric chambers to microgravity suites, and, of course, that ginormous multi-level pool.

The pool itself spans 131 feet by 164 feet at the surface, with a 52-foot wide shaft that plunges to 164 feet at its lowest point. (The current deepest diving pool located in Poland has a depth of 148 feet.) The pool has the capacity to hold nearly 1.5 million cubic feet of water, which is the equivalent of 17 Olympic-size swimming pools or 168 million cups of English Breakfast. This means it’s also the world’s largest pool by volume, according to Blue Abyss.

The pool plunges to 164 feet at its lowest point.  Blue Abyss

Blue Abyss says the multipurpose pool can be used to simulate sections of the International Space Station, stage underwater film sets, test submersibles and train deep-sea divers. As such, everything from the pool’s temperature to its salinity can be controlled to simulate a variety of extreme conditions. It can even create different currents at various depths. The pool is also fitted with a sliding roof and a 33-ton crane to help with lowering vessels and equipment into the water.

Blue Abyss was designed by architect Robin Partington, the man behind London’s Gherkin building, which means it’s certainly not short on eye-catching aesthetics. But it’s about more than looks: Once open, the company says Blue Abyss will generate an estimated $11 million (£8 million) for the local economy every year. Not to mention further advance research in a myriad of areas.

Blue Abyss will be situated on a 10-acre site in England’s Cornwall.  Sven Parris/Blue Abyss

Vickers also confirmed that $7 million (£5 million) for pre-construction costs has already been secured and a range of infrastructure funds received. The build is expected to take approximately 18 months to complete with Blue Abyss slated to open in 2023. Get your bathing suit ready.