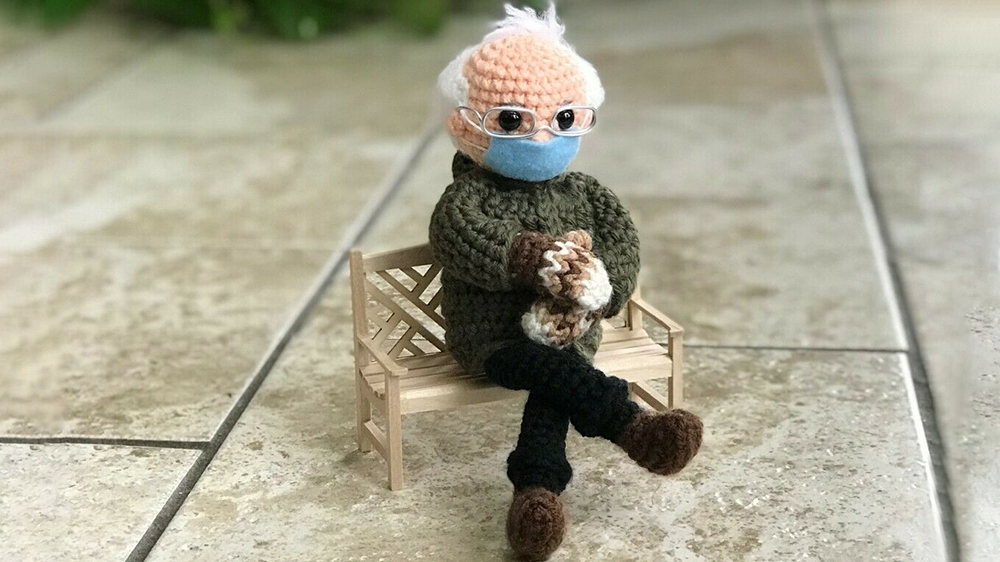 The internet still can’t get enough of Bernie Sanders’s Inauguration Day steeze. After countless memes, filters and stories, Vermont’s junior senator and his iconic ‘fit have been turned into a collectible crochet doll to raise funds for charity.

Handcrafted by Tobey King of Tobey Time Crochet, the adorable mini-Bernie is up for auction on eBay and has already attracted 149 bids and nearly 3,000 watchers. It was initially priced at just 99 cents and is now sitting at a whopping $17,100 with less than a day left.

King, who has been crocheting since 2012, managed to nail each part of the politician’s pared-back look. Everything from the decidedly pragmatic Burton jacket to his standard-issue surgical mask has been reimagined in wool. Even the now-famous tonal Fair Isle mittens, which were fashioned by Vermont school teacher Jen Ellis, appear in perfect miniature form on the 9-inch Bernie.

Everything from Bernie’s Burton jacket to his surgical mask has been reimagined in wool.  Tobey Time Crochet

Surprisingly, this isn’t the first time King has knitted the 79-year-old public servant. The Texan creative actually started crocheting presidential candidates in 2016 and has previously created pint-sized versions of Donald Trump, Bernie Sanders, Ted Cruz and Hillary Clinton. She also made a Ruth Bader Ginsburg doll which appeared on NBC’s hit series This Is Us.

The best part? The Bernie Sanders Crochet Doll will also help Americans in need. As per the listing, 100 percent of the proceeds will go toward one of Bernie’s favorite charities, Meals on Wheels. This community-based organization is dedicated to addressing senior isolation and hunger throughout the country.

In his typical solicitous fashion, Sen. Sanders is also capitalizing on the hype to do good. Over the weekend, he started selling custom sweatshirts featuring the viral photo through his online campaign store with all of the proceeds benefitting Meals on Wheels Vermont. Unsurprisingly, the $45 Chairman Sanders Crewneck sold out in all sizes almost immediately.

Fortunately, there’s another way in which you can recreate the ever-popular meme. King is now selling the crochet pattern of the Sanders doll on Etsy for just $5, which means you can make your very own pint-sized Bernie.

Check out more photos of the doll below: