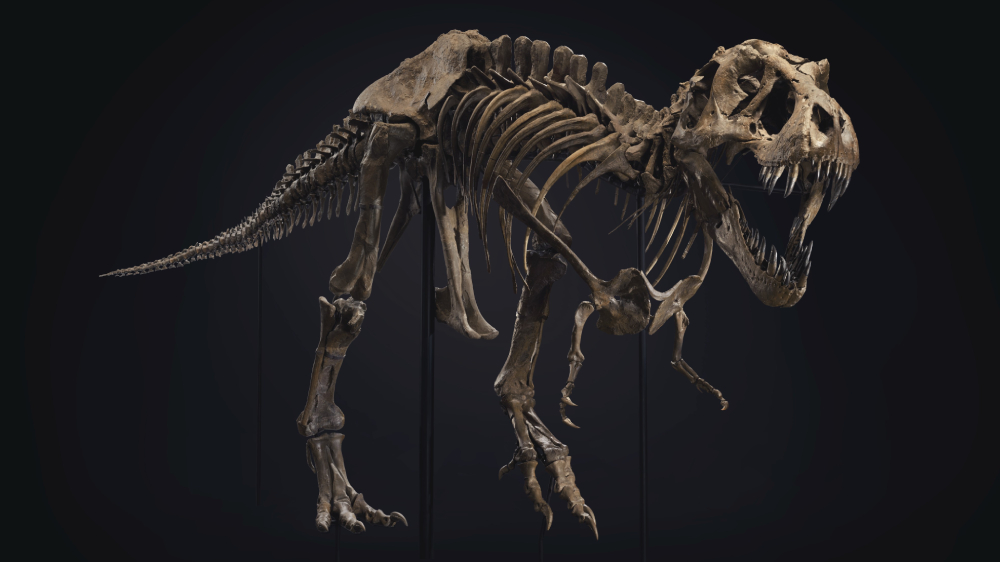 Who knew a T.rex could be so popular?

When Christie’s announced the auction of Stan, one of the most intact Tyrannosaurus rex skeletons ever unearthed, no one expected it to be a cheap acquisition. Original estimates suggested the piece could fetch as much as $8 million—no small sum. But on Tuesday night, Stan quadrupled those estimates to hammer down for a whopping $31.85 million. The sum was driven, in part, by the skeleton’s good condition, and it makes Stan the most expensive dinosaur fossil ever sold. The lucky, anonymous new owner made the winning bid via telephone during a heated sale that saw collectors clamoring to make it theirs.

Towering above humans at 13 feet high and 40 feet long from head to tail, the specimen is one of only about 50 more or less complete T-rex skeletons ever found. Most comparable examples are housed in museums and other public institutions, making this opportunity all the juicier for those looking to own, quite literally, a piece of pre-history.

Stan’s skull is one of the most complete ever found.  Courtesy of Christie's

Originally found by amateur paleontologist Stan Sacrison (this skeleton’s namesake) in 1987, it was initially misidentified as a more common triceratops skeleton before being correctly labeled in 1992. After more than 30,000 hours of painstaking, careful excavation, it was freed from the ground. It spent most of its recent life on display at the Black Hills Institute in South Dakota where it was studied by scientists for two decades. With 188 bones, including a remarkably intact skull, the skeleton is considered special even among its rarefied peers for how complete the set is. Researchers estimate that, when alive, Stan would have weighed between seven to eight tons and his bones demonstrate signs of a difficult existence, like the fused cervical vertebrae that indicates a broken neck.

“I’ll never forget the moment I came face to face with him for the first time, after his remount in Colorado––he looked even larger and more ferocious than I’d imagined, a specimen that only further establishes the T.rex’s position as the King of Dinosaurs,” said James Hyslop, Christie’s head of Scientific Instruments, Globes and Natural History, in a statement leading up to the sale.