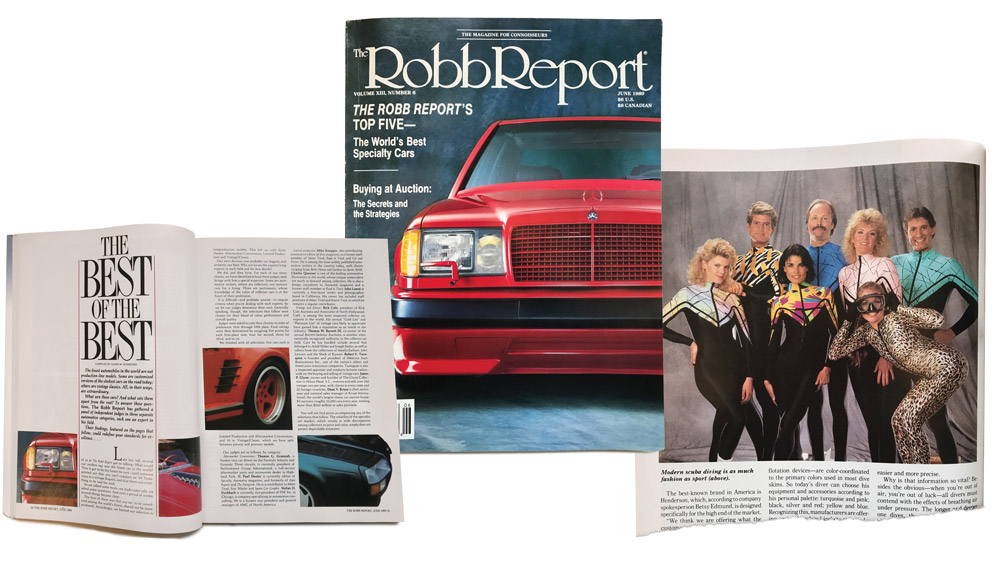 As noted in the editor’s letter in the June 1989 issue, “new cars [the Bertone Free-climber], hot vacation resorts [the expanded Riviera Hotel & Casino in Las Vegas], recent investment trends [CDs—certificates of deposit, not the kind that played NKOTB hits], and exotic collectibles [Russian art in the age of glasnost]” were the focus of The Robb Report’s attention. (Note the presence of the article The, which, like big hair, shoulder pads, and other popular adornments of the 1980s, eventually fell out of fashion.)

“But while we have always chosen from among the best and the richest, we have stopped short of choosing between them,” wrote Geoffrey Douglas, the magazine’s editor at the time. Then he introduced that issue’s marquee feature and described it as “a departure from this pattern.” It was identified in the table of contents as follows: “The Best of the Best: The Robb Report’s first ‘Best Of’ feature rates the world’s finest specialty cars.”

Best of the Best was originally a single feature, and it covered cars exclusively, ranking the top five in four categories: aftermarket conversion, limited production, prewar vintage/classic, and postwar vintage/classic.

“More than simply a profile of specialty autos, it is a precisely defined ranking . . . of the most exclusive cars ever built,” wrote Douglas. “As such, it is bound to provoke dispute. . . . But controversy is a healthy thing: It sparks interest and prompts debate—which is at least part of our goal. . . . And whether you agree with our choices or are infuriated by them, let us know your thoughts.”

Overall, the Best of the Best selections—made by a panel of judges that included auto writers, collectors, and a trio of auctioneers—remain solid 30 years later. In terms of technology and design, the winners and runners-up in the then-contemporary categories certainly have aged much better than the fax machines and leopard-print scuba-diving suit that The Robb Report was also touting in June 1989.

The top pick among 1989’s aftermarket conversion cars was the AMG Hammer, a Mercedes-Benz E-Class that was the fastest passenger sedan of its time. Its zero-to-60-mph time of 5.0 seconds remains impressive. The runner-up was a RUF Porsche Turbo 3.4 that doesn’t look much different from a 2018 RUF SCR and undoubtedly would be as much fun to drive today as it was three decades ago.

The same can be said for the 575 hp Porsche 959 that the judges awarded top honors in the limited-​production category. According to Hagerty’s valuation, if you want to buy a 1988 959 today, it would set you back about $1.35 million. The Ferrari F40 that finished second to the Porsche in the judges’ voting is worth about $1.1 million today. The third-place finisher, the Ferrari Testarossa, doesn’t play as well today as it did then, but neither does the TV series that made it a star, Miami Vice.

The Mercedes-Benz 540K Special Roadster and Bugatti Royale finished in a first-place tie in the prewar group. No arguments with the Mercedes-Benz pick here; two years ago, an example sold at auction for $9.9 million, and four years before that, another fetched nearly $12 million at auction. Reportedly, only six examples of the Royale were built, and they were selling for as much as $9 million in 1989. But if you’re going to go with a collectible Bugatti, a better pick would be the Type 57SC Atlantic, the model for which Ralph Lauren spent $40 million.

Likewise, if you’re going to select a Ferrari as the winner for the postwar category, the 250 Testarossa is an easily defensible choice—it’s coveted enough today to be valued at about $23 million, according to Hagerty—but the 250 GTO would have been a better pick. An example is said to have sold for $52 million in a private sale two years ago.

But those are petty quibbles, because while nothing in the June 1989 issue is new or recent, many of the cars that were selected as the original Best of the Best are still exotic, hot, and very cool.