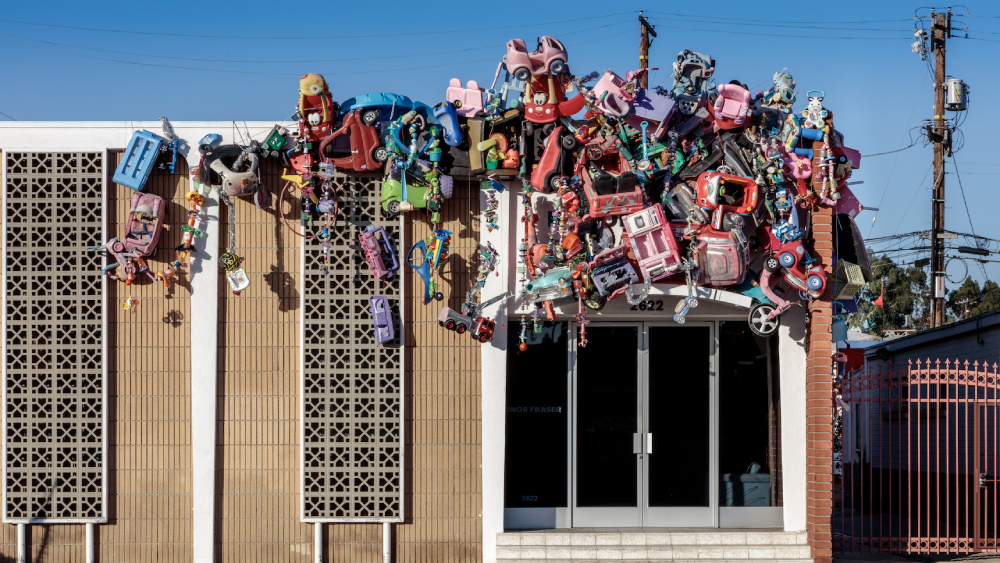 Back in April, frustrated by isolation and the shutdown of the artistic community, conceptual artist Warren Neidich had an epiphany: In times of crisis, art is an essential service. So he decided to set up drive-through outdoor exhibitions featuring the work of local artists on Long Island and in Los Angeles. After what Neidich called a “resounding success,” a second LA exhibit, Drive-By-Art, will take place this weekend.

Curbside art appreciation is the latest creative way artists are responding to lockdown and the ever-rising Covid-19 death toll. Most dissemination has been, by necessity, online, but Neidich wanted to reach beyond the two-dimensional sterility of virtual art viewed on a lonely computer screen. “I figured it was a safe way to bring people out from watching TV and being on computers all the time,” he told Robb Report.

More than 60 artists based in west LA will exhibit paintings, sculptures, video projections, ceramics and conceptual installations outdoors in their front yards and garages and outside their studios this Saturday and Sunday, mirroring a previous installation on the east side of town over Memorial Day weekend.

All artworks are meant to be viewed from the “protective bubble” of your own car, said Neidich, who was inspired by the pandemic phenomenon of drive-by birthday parties and graduations. Spectators can use maps on Drive-By-Art’s website to navigate routes that trace the homes of local artists; the result is a little like an artistic scavenger hunt. Is that gnome art?

Los Angeles installations have included Dani Dodge’s Choppy Waters, a series of paper boats, some torn and drifting, hung from trees and street signs. Dodge said the boats, buffeted by the wind, represent “our bodies, out of space and time, floating and sometimes sinking.”

Vanessa Prager’s bouquet of flowers, entitled Miss You, represents her yearning for connection, while Robert Gunderman’s Death By Date records the first American fatality from Covid-19 and the grim death count as of May 18 in the guise of a real-estate for-sale sign. In Highland Park, Dani Tull’s colored lanterns “illuminate our path forward during these dark times” and represent “the pilgrimages we make to experience art and culture.”

Channeling his own feelings of dislocation, Neidich said he wanted to create “solidarity in a moment of dis-solidarity.”

“I was inspired by the opera singers on the balconies in Italian towns, and the artworks on Berlin balconies,” said Neidich. “I was feeling the whole weight of the pandemic, and I just responded to it—I needed to do something to help myself and my community.”

The Long Island exhibit in early May featured the work of 52 artists strung along Route 27 from Hampton Bays to Montauk. Neidich, an LA native who had been sheltering in East Hampton with his family, realized that the concept was perfect for LA’s car culture. Even during normal times, he said, “you’re on your own in LA all the time—it’s a very isolated town, and the artists’ community is based almost entirely on going to openings. So I wanted to create a participatory event that would bring together artists and art lovers.”

Vanessa Prager’s bouquet of flowers represents a longing to connect.  Courtesy of Drive-By-Art

Neidich and his fellow organizers, Renee Petropoulos, Michael Slenske and Anuradha Vikram, invited submissions from local artists and vetted them together. The team is now considering approaches from other areas keen to replicate the success of Drive-By-Art, from New York’s Hudson Valley to Dubai.