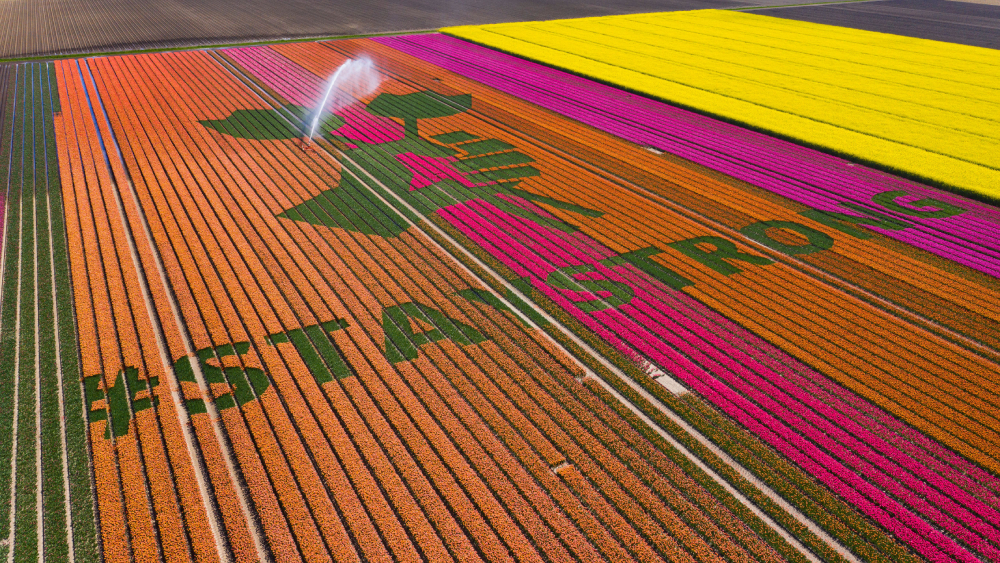 Sending a heartfelt message with flowers is not a new idea. But some tulip farmers in the Netherlands have taken the concept to a whole new level.

Holland, of course, is world-renowned for its remarkable tulip fields, and now some very ambitious growers decided to use those vibrant bulbs as a means of responding to the Covid-19 crisis. With global travel at a standstill as the future of pandemic remains uncertain, the Netherlands has lost an entire season of tourism––which usually peaks in April and May––when visitors would arrive to explore its famed fields. Until the next viable season, farmers are creating messages of encouragement to frontline healthcare workers amid their kaleidoscopic rows.

Best viewed while flying overhead, Dutch Daffodils and Tulips in Holland spelled out “see you next year” with their blossoms. In Noordoostpolder, a central municipality, blooms were arranged to show a fist holding tulips and “#staystrong” written beneath. And this latter example, as impressive as it is, is far more than meets the eye.

Row upon row of red tulips in the Netherlands.  Courtesy of Albert Beukhof/Solent News/Shutterstock

Designed by Floor van Paassen of Zuiverwerk, the tribute includes an entirely new breed of tulip––also named Stay Strong––developed by farmers Joris Schouten and Frank Timmerman as a blend of both red and yellow tulips. Specifically created as a show of solidarity with frontline healthcare workers, sales of the new varietal will go to benefit Doctors Without Borders through an initiative dubbed Stay Strong Flowers for which this arrangement will act as a logo.

A video shared on April 25th showed Jenny Groen, an ICU nurse who works in an Amsterdam hospital, christening the buds, which were laid down by surveying and landscaping company Geoservice Landmeetkunde. Covering 7.5 acres, the tulip field consists of an estimated 3 million to 4.5 million beautifully colored stems.

To date, the Netherlands has 42,984 confirmed cases of Covid-19 and at least 5,510 deaths since the virus emerged at the end of last year. May the tulip fields and their messages provide a small measure of hope and resolve to frontline workers. Bedankt, tulip farmers.