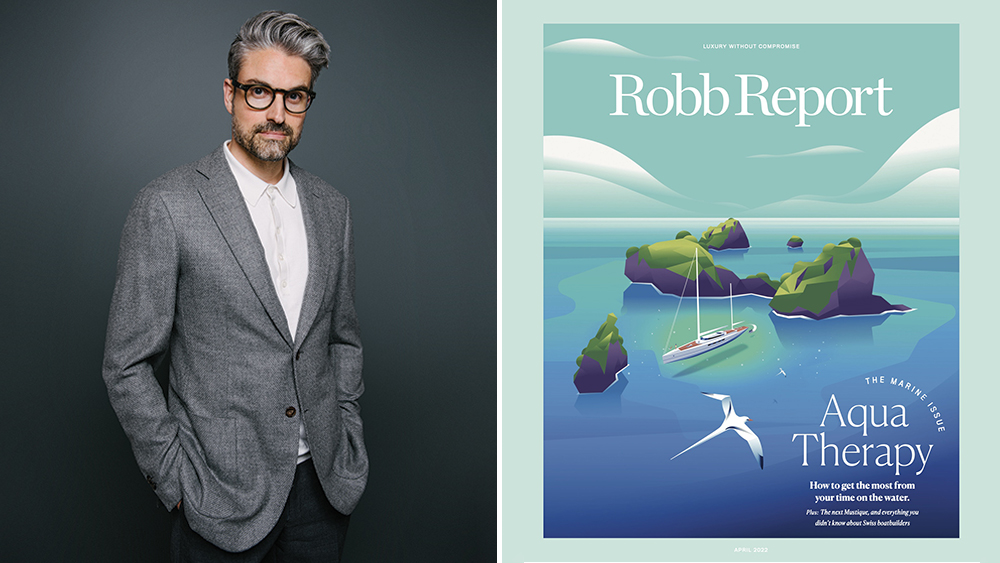 Placing hundreds of millions of dollars’ worth of art close to salt water and sea air might feel somewhat counterintuitive. But such is the nth-degree level of control you can achieve aboard a superyacht these days, hanging your prized possessions on the walls of your floating palace isn’t a bad idea. Climate-controlled, out of direct sunlight and, if necessary, coated in high- tech security measures, yacht interiors are tailor-made for displaying treasured items.

Welcome to our annual marine issue. This month we have considered every angle of the contemporary yacht build—and what’s on the horizon for the boats of tomorrow. So whether that’s must-have toys (a shark-shaped submersible, anyone?), next-wave technology, brag-worthy interiors wherein to showcase your taste in Picassos or even the latest immersive video installations, or just a really cool garden, we’ll bring you the best of it.

Speaking of counterintuitive: I love stories that sound improbable right from the start, such as the tale of the small landlocked nation that has nevertheless produced two world-class yards that have been crafting elegant wooden boats by hand for over a century. The country’s prowess is in part explained by its numerous lakes, but it also has an unexpected and largely unknown maritime history going back millennia. If you’ve not already guessed the destination in question, you’ll find out here.

In the meantime, how about a nautical joke? When do yacht owners start planning their next boat? The moment they take delivery of their last one. Admittedly, as jokes go, it pretty much sucks, but it does speak to a seafaring truth. Boats take years to design and build, and often by the time they’re delivered, some owners are already itching to incorporate the latest innovations and marine technologies into a new creation. But not all owners. A passionate minority take the opposite path, sailing an heirloom that has been passed down generations before bequeathing it to their own children to keep the legacy alive. We meet four families for whom history repeating is the ultimate joy of being on the water. Check out the full story, here.

Another irresistible yarn is of the glorious island idyll that aspires to “out-Mustique” Mustique as a playground for yacht owners and the private-jet set. Canouan is small—barely five square miles—which is, of course, part of the allure. Around 15 miles south of Mustique within the same island grouping, the Grenadines, it’s also pristine, with enough white-sand beaches, gin-clear waters and abundant other natural wonders—not to mention a vital location beneath the hurricane belt—to make it a highly sought-after destination. Plenty of A-listers have visited, and more than one businessman with deep pockets and big ideas has tried to make their (second or third) fortune reimagining it over the past two decades. But it hasn’t quite happened. Is Dermot Desmond, the real-estate mogul, financier and billionaire, the man to find the right formula? In an exclusive interview with Robb Report, he reveals that developing Canouan will be, he hopes, his defining legacy.

Just as beautiful as a tropical island or a superyacht, though at a somewhat smaller scale of expenditure, is Porsche’s latest dream machine. It’s no less exclusive, however, as you can’t actually buy it. The Mission R, a four-wheel-drive electric missile of a race car, is a one-off concept, rumored to be paving the way for the next version of the marque’s 718 Cayman, reported to be EV-only. Read about our test-drive here. Plus, don’t miss chef Mario Carbone in The Answers, the anniversary Royal Oaks to collect and a new hotel with perhaps the most breathtaking views of the French Riviera.