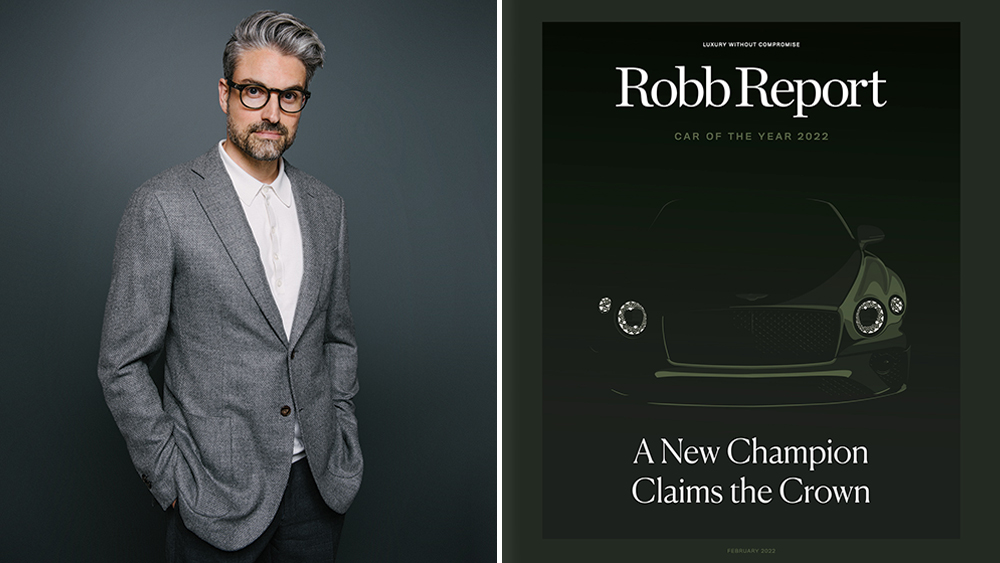 Welcome to our February issue, which has a palpable sense of evolution coursing through it. An underappreciated month by many, February nevertheless is host to one of the highlights of Robb Report’s editorial calendar, as we reveal the winner of our annual Car of the Year competition.

We made a few changes this time around as we look toward next year’s 20th anniversary. Twenty years! That’s a lot of driving, a great deal of eating and drinking and many, many friendships forged, so thank you to all who have participated over the past two decades. But back to this year: To start, we had to find a new venue, as Meadowood, our home in Napa Valley until recently, is still recovering from the devastating forest fire that engulfed its grounds in 2020. Moving the action to Sonoma offered us a comparable blend of scenic views and spectacular wines with which to toast the cars once judging was complete. In Boca Raton, where we hold our East Coast portion of the competition, a visit to the Concours Club in Miami was added to the itinerary, allowing judges to test the vehicles on the track.

So, to the cars. Evolution was apparent there, too, as for the first time our lineup included an all-electric vehicle. Step—or more accurately, roll silently—forward, Mercedes’s EQS 580 4MATIC. One judge called it “an amazing technological wonder,” though to be fair, another called it “boring.” But what was indisputable was that its presence signaled a seismic shift, as one of the auto industry’s heaviest hitters chose to put its EV in the ring with the other marques’ big internal-combustion-powered beasts. How long until most of the cars in our competition are electric? Seven years? Five? Fewer?

Further progression was evident in the judging itself, as, along with the 178 readers who took part, Robb Report’s automotive editors weighed in for the first time, reviewing and rating each car not just on performance but also on what it brings to its respective brand and to the industry as a whole. All the scores combined produced the winner… but only just. One of the closest competitions we’ve had resulted in an unexpected and intriguing outcome. If the cover hasn’t given it away already, you can see for yourself, here.

Sticking with cars for a moment, award-winning columnist Ben Oliver ponders how many of the numerous automotive disrupter brands that are currently out there will survive the next 10 years. And by way of contrast, some pages earlier, Oliver gets behind the wheel of Bugatti’s spectacular final ICE-powered hurrah: the Chiron Super Sport—the fastest, most powerful gas-propelled production car from a heritage maker. The French marque has announced that its next release will be hybrid, the one following it likely electric. Believe me, it goes out with a bang.

Meanwhile, Michelin three-star chef Arnaud Donckele’s professional evolution is on a smaller scale, but it’s no less fascinating. Having conjured a magical vinaigrette with ginger, mandarin juice and grapefruit and lemon zests, he became obsessed with sauces. At Plénitude in Paris, he makes them the star of each dish and challenges perceptions about what truly matters on your plate.

You’ll also find a hoverbike, some cherished watches, one of the least-visited countries in the world, plenty of whiskey, four takes on LA living by renowned architects that go beyond big white cubes, plus some thrilling explorer-yacht charters. Whatever 2022 holds, it needn’t be dull.