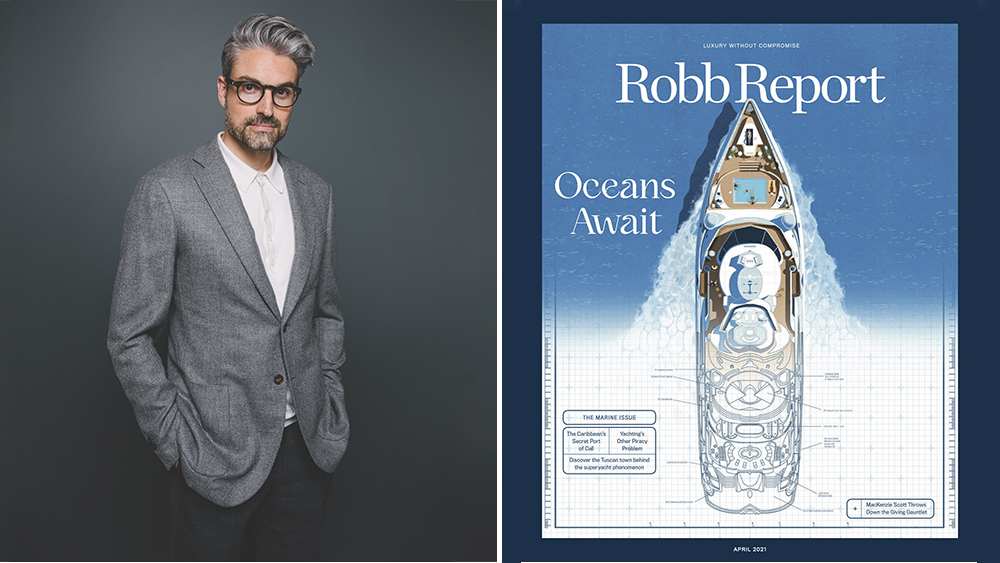 Talk to yacht owners and people who spend time on the water and you’ll hear many reasons why they do. They like the community. They like the sports. They like the freedom. Those in the big boats might even admit they like the attention. And anyone who has set foot aboard anything approaching a superyacht will know how easy it is to like the lifestyle. But for many, there’s also a sense of adventure and romance. It doesn’t matter how vast your ship might be: Out there on the ocean it’s tiny, and ultimately, you’re not the one in control.

For this marine issue, we look into many aspects of the life aquatic. As ever, our primary obsession is with the highest expressions of excellence and with the extraordinary craftspeople who create them. Which is why we’re so intrigued by a small seaside town in Tuscany called Viareggio, which over the last four decades has become the superyacht building hub of the world. Italy has always had a great affinity with manufacture, of course, but even so, the scale and concentration of yacht makers in this enclave of barely 60,000 people is remarkable.

The 1979 launch of what is considered the first superyacht, from the Benetti yard in Viareggio.  Courtesy of Benetti Yachts

How did this happen? As Mark Ellwood, editor at large and frequent Viareggio visitor, explains, his family’s favorite European vacation spot has developed significantly over the last few decades. Boatbuilding has been a part of Viareggio’s story since the 19th century, but the catalyst for this seismic growth was the commission of what is considered the world’s first superyacht, at the end of the 1970s. The rest, as they say, is history: Boatbuilding in Viareggio flourished, and so did the specialized and highly skilled crafts required to support that expansion, such that it is now a one-stop-shop for anyone in the market for a boat of their own.

Whether you have a yacht yourself or not, you can probably rattle off some of the most popular sailing destinations around the world: Monaco, Florida, Ibiza, the Bahamas. You’ll run out of fingers (and toes) long before you get to Dominica, the yacht captains’ secret anchorage, treasured for its verdant rainforest, abundant diving spots and… lack of other yachts. The largely undiscovered Caribbean island is still off the radar but won’t be for long, says Michael Verdon, Robb Report’s marine editor, who just got back.

While you’re there, think on this: “Less than 1 percent of global philanthropy goes toward ocean conservation. That’s for a part of the planet that feeds two billion people, provides millions of jobs and gives us 50 percent of our oxygen.” So says Nina Jensen, CEO of REV Ocean, an ambitious foundation with a (not so) secret weapon: an eponymous yacht, newly crowned as the world’s largest, which will also double as the world’s biggest research ship when it’s launched, hopefully at the end of next year. At 600 feet long, it will be a breathtaking vessel, but just as exciting is its mission: finding practical answers for the oceans’ problems. Owner Kjell Inge Røkke made his billions partly from offshore drilling, and reportedly plowed around $350 million back into building his yacht, which marries a luxurious interior with an ice-class hull and all the laboratories and toys that a world-class polar-research ship might need.

Røkke is part of a loose alliance of wealthy conservationists who are funneling their money into immediate action to secure our oceans’ future, mapping huge underwater territories, reducing the impact of plastics and sequencing the DNA of plankton and bacteria, among other things. It’s a heartening story: You can hear from the philanthropists themselves in the feature “Ocean Keepers.”

Speaking of philanthropy, we also look at how MacKenzie Scott has blown others out of the water with the speed and impact of her charitable giving since her divorce from Jeff Bezos. Her actions have shone a fresh light on the work of numerous foundations, some of which sit on their fortunes for decades, divesting as little as 5 percent a year. When and how to give with impact is the subject of the magazine feature “MacKenzie’s Method.”