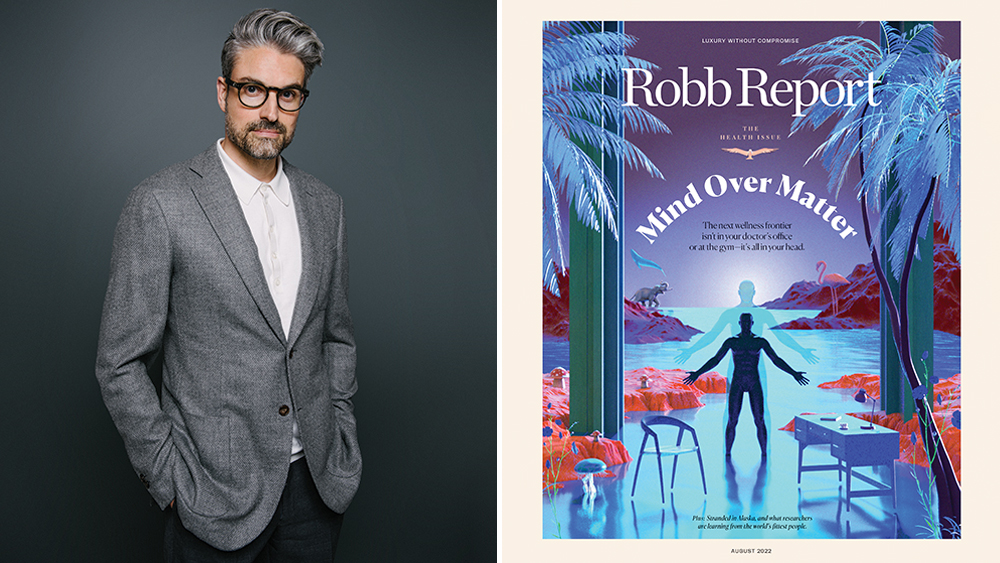 So, how are you? I’m OK, thanks for asking. You know, surviving. But wait. Am I? Are we? How are you really feeling? And I don’t mean the usual aches and pains that come (often) from a life well lived, full of sports (that’ll be the meniscus tears in both my knees, plus two spinal surgeries), travel (two shoulder operations), work pressures (24 years in front of a computer haven’t helped my back any and account for the glasses) and… what’s the phrase we use… “general wear and tear.”

Two years ago, Robb Report published its first health issue, which we called the Transformation Issue. It felt apposite, five months into a global pandemic that we hoped was reaching its conclusion, to focus on how we could be well again. And that started a train of thought for me that’s yet to stop rolling. How much do we really know about our health? And how can we know more?

In the time since, my father has been laid low with cancers, and my mother died of a lung condition. I looked at my son, not yet 5, and wondered whether it was inevitable in decades to come that he will experience what I am now: the constant care, the admin, the worry that come with tending to an ailing parent. That led me to research anticancer lifestyle changes and, ultimately, to adopt a plant-based diet. What other adjustments was I prepared to make (I haven’t given up drinking, for example—I need some vices) in order to give myself the best chance of living longer and, more importantly, healthier?

“Health should not be the absence of disease but the abundance of vitality.” It’s a phrase I’ve heard a lot at a company called Next Health, a “health optimization and longevity center,” according to its website. I started visiting its branch in New York City after discussing with cofounder and president Kevin Peake if there was anything that could be done about my chronic sciatic pain, which the second of those spinal surgeries failed to clear some six years ago. While the fire in my leg is considerably less searing than it was post-surgery, I still take three prescription medications daily. They come with side effects, including memory loss, insomnia, brain fog, digestive issues, memory loss… and who knows what else? I want to be rid of them.

At Next Health, I’ve had extensive blood analysis which has targeted things for me to work on—my stress markers are high, unsurprisingly—but the results have been largely positive. I’ve tried cryotherapy, infrared-light therapy and ozone therapy to address inflammation, pain and that stress, but life has frequently interrupted the process. That said, the discomfort has faded and I’m on fewer meds. Is it due to the treatments, the lifestyle changes, the supplements I’m now also taking? I couldn’t tell you. Will I continue? Sure. I might not have found the answers I was looking for, but I like the direction I’m heading in.

In this issue, you’ll find many stories of quests and discoveries. We tasked a series of writers with testing the newest forms of wellness treatments, from the physically demanding to the mentally exhausting—plus what sounds, frankly, like a thoroughly indulgent hiking tour in Italy. One of our editors, Michael Verdon, fearlessly(ish) volunteered to visit one of the few legal psilocybin-assisted-therapy retreats (that’s magic mushrooms to you and me) to attempt to deal with childhood trauma and depression. You can read his remarkable firsthand account, and learn more about how psychedelics are currently being trialed to treat a range of conditions at the link here.

I may struggle to convince you that deputy editor Josh Condon’s extraordinary adventure in Alaska was part of a search for enhanced health—not least because he was involved in a plane wreck and stranded in the bush for several days. But he did return a changed man. Now, for the good of his health, I have to persuade him not to go straight back there again.