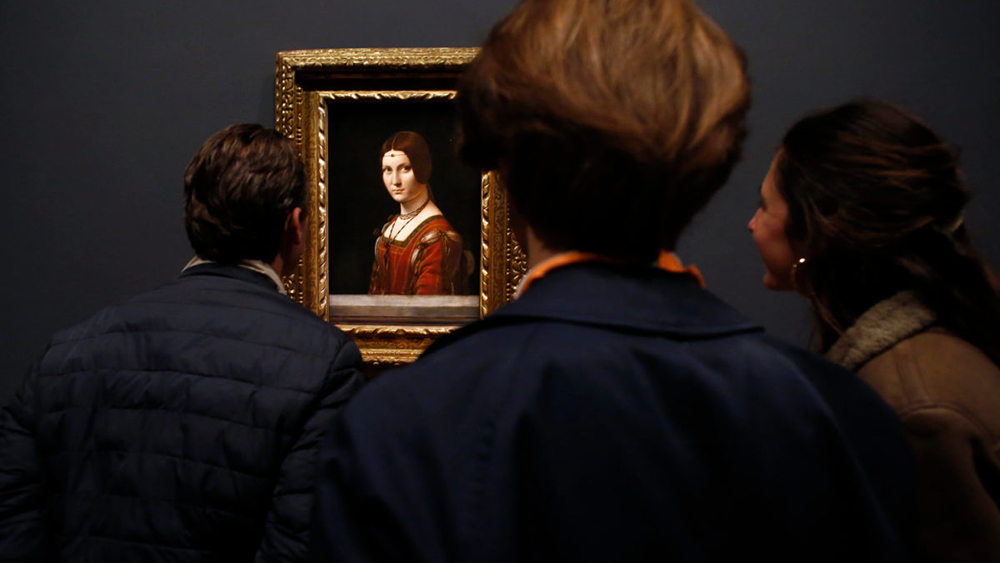 It’s one of the biggest events of the season in the art world, and it is finally opening to the public on Thursday, October 24. The show in question is a Leonardo da Vinci retrospective at the Louvre in Paris that’s being held to mark the 500th anniversary of the Renaissance artist’s death. Curated by Vincent Delieuvin and Louis Frank, it is one of the biggest Leonardo exhibitions ever mounted, so it’s only natural that the exhibition has been the subject of intrigue—not the least because it was long unclear whether some of the artist’s most notable works, including the Vitruvian Man and Salvator Mundi, would make it to France. Below, a guide to all of your burning answers about the exhibition.

The big question first: Is the Mona Lisa included?

Sort of. Technically, the Mona Lisa, Leonardo’s famed picture of a mysterious smiling woman, isn’t in the show itself, but the painting will remain on view in the Louvre’s hallowed galleries. Over the summer, while its usual home was being renovated, the painting was moved to a new location, in front of paintings by Peter Paul Rubens. Naturally, this caused some controversy. Visitors and Louvre staffers alike complained about the long lines of people who came to the museum to see the painting. One tour guide told Le Parisien, “I have never seen such chaos. I did not think it was possible to show such amateurism.” The chaos came to an end earlier this month, when the painting moved back to its famed location in the Salle des États. The Louvre owns four other paintings by Leonardo—The Virgin of the Rocks, La Belle Ferronnière, Saint John the Baptist, and Saint Anne—and they will all be in the show. That means that about one-third of all the paintings attributed to Leonardo are in the Louvre’s holdings.

What about Salvator Mundi?

We still don’t know. Though the painting isn’t on view as this article goes to press, the Louvre maintains that the work, which sold at Christie’s in 2017 for $450.3 million, setting a new record for the most expensive piece ever bought at auction, could still make an appearance, according to an Art Newspaper report. Saudi Arabia’s Ministry of Culture is rumored to be the current owner of the painting.

And what about the Vitruvian Man?

That drawing is included, though it took years of diplomatic wrangling to make the loan happen. The Vitruvian Man is housed at the Gallerie dell’Accademia in Venice, and can typically only be shown once every six years because it is so fragile. Because it was shown in Venice this summer during the Venice Biennale, the Italian activist group Italia Nostra, which advocates for protecting its country’s cultural heritage, said that the drawing should not be allowed to travel to France. Italia Nostra successfully petitioned a court in the country to block the loan—only to have that decision overturned an appeal just days before the Louvre exhibition opened.

There’s so much literature about Leonardo. Do we really need this exhibition?

Yes, if you ask the curators who have worked on the show for a decade. Delieuvin and Frank have set out with the goal of dramatically revising how scholars study Leonardo and his work. “Our heads were too convinced by what was the classic way of writing about Leonardo,” Delieuvin told the Art Newspaper. “But we no longer think like that now—that Leonardo’s career is divided into distinct periods, determined by geography. For example, the idea that he changed his style on his arrival in Milan is not true.” Plus, a number of important loans have been made for the exhibition, and the works are unlikely to return to France for quite a while.

Will Leonardo’s experiments with technology be represented?

Yes. The Louvre is asserting that, like most other important artists, Leonardo was truly fascinated by the many possibilities of technology, and he has even been credited with designing the first calculator, among other inventions. (Many tech-minded artists have paid homage to Leonardo, among them Hito Steyerl, who debuted a video installation about a submarine Leonardo sketched out at the Venice Biennale earlier this year.) One way Leonardo’s interest in technology is reflected in the Louvre show is through a new VR experience, “Mona Lisa: Beyond the Glass,” through which visitors can see what it might have been like to fly on an unrealized machine that the artist designed. Through the experience, they can also learn about the artist’s famed painting.

Science was also a key area of interest for Leonardo. How will the curators touch on that?

Leonardo’s works have been reexamined by the Louvre’s curators, and X-rays and infrareds of paintings are on view in the show to allow visitors to see which pigments Leonardo was using. There are also sections about copies of Leonardo’s work that point out the differences between art made by the master himself and paintings made by his acolytes.

The first reviews suggest that the show will be a hit. Jonathan Jones, writing for the Guardian, gave the exhibition five stars, writing, “this is the great Leonardo show of our time because it reveals his true identity as a scientist, inventor, engineer and infinitely curious observer of life. It’s a blockbuster with a brain that reveals why we will never tire of the genius who dreamed of our future, five centuries ago.”

How do I see the exhibition?

You’ll have to book in advance. It costs about €17 (around $19), and you can buy tickets through the Louvre’s website. Almost every time slot through the end of October is already gone, but thankfully the show is on view for quite a while—through February 24, 2020, to be exact. Expect long lines.