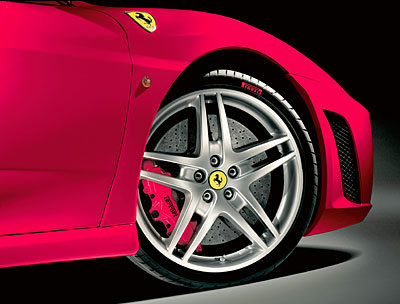 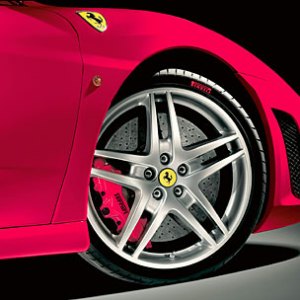 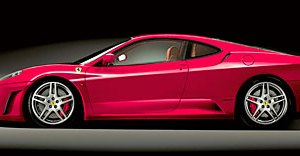 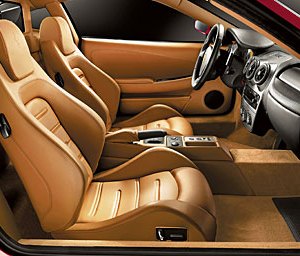 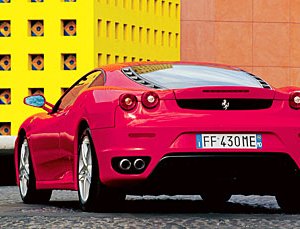 Few and precious are those entry-level performance cars that, wherever they are parked, are capable of drawing stares and stirring sighs from passersby. A Porsche Boxster and its sibling 911 are good for glances but offer no irresistible invitation to look and linger. Lamborghini’s Gallardo is a fierce shape that astonishes and intimidates, but it is not something you would want to drive home to mother. The baby Bentley, the Continental GT, is unmistakably British and undeniably impressive, but it is also as haughty and as unapproachable as royalty; we nod our respects and walk on by.

So praise be to Enzo that there is Ferrari, the ultimate automotive totem, a scarlet seduction, a snarling synonym for Italian design. Envy and respect from curbside observers are just some of the benefits of ownership. In terms of value and status associated with a name, Ferrari stands alongside Tiffany, Ritz, Savile Row, and De Beers. Consider that while only a few thousand have ever driven the cars, millions of disciples wear the emblems and buy the kit of Ferrari.

The new Prince of Maranello is the incoming 2005 F430, a mid-engine, two-seat, ferociously fast, 8-cylinder berlinetta that replaces the 360 Modena and improves upon every motoring attribute that a Ferrari has ever represented. The F430 embodies such a leap in design and technology from the best-selling 360 that the name Modena has been relegated to the archives, replaced by an alphanumeric designation. Its styling is cued by the best from the new Enzo supercar and Ferrari’s 1960s racecars.

By the numbers—a top speed of 196 mph, a zero-to-60-mph scamper in 3.9 seconds—the 430 cleanly whomps its closest rivals, the Lamborghini Gallardo and the Porsche 997. With 490 hp in its European form, it is 23 percent more powerful than the 360 Modena, with 25 percent more torque. Its aero efficiency and ability to stick to the road also are improved vastly over the Modena’s. In fact, say Ferrari engineers, the muscle and pace of the new coupe is so extraordinary that ultrasophisticated handling and traction controls were deemed necessary to prevent less polished drivers from pirouetting into the weeds.

The F430 has borrowed everything from Ferrari’s F/1 racecars that could serve any purpose on public roads—from the carbon-ceramic brakes that are as thick and as round as manhole covers to the flat underbody and aerodynamic diffusers that can cook up more than 200 pounds of downforce to the buttons on the steering wheel that control shifting and adjust handling. The overriding philosophy behind the F430, according to the Ferrari folk, is to offer a powerful car that does not overpower a driver’s skills. In other words, they wanted to build a car that we can drive and not one that drives us, one that can be taken to its considerable limits without threatening anyone’s sense of mortality.

The car is Italy’s best-looking product since Venetian water taxis and the silk suit. Its carrozzeria was the legendary Pininfarina studio, which produced a shape that includes subtleties suggested by Ferrari’s in-house design chief, Frank Stephenson, the man who sketched the Mini Cooper. Stephenson decided that today’s automotive designs have become too aggressive, too in-your-grille, and that the F430 should invoke the softer slopes and the artistry of cars from the ’50s and ’60s. Hence, the front end shows large, ovoid air intakes similar to those on the Ferrari 156 Grand Prix car that Phil Hill drove to a world championship title in 1961. These and every other orifice on the car—nine total—are fully functional, because great gulps of air are required to cool down that 4.3-liter engine and those big disc brakes, and all of that rushing air is converted into downforce.

The elegantly hunched rear end, a visual reminder of the car’s enormous power, has four protruding lights mounted directly above an equal number of tailpipes, which appear wide enough to launch mortar rounds. All of these elements have been snitched from the Enzo, along with a few lines from its angular butt. And none of this—not the silhouette, the mechanicals, or the interior—is a revamp of something from last year. In fact, the only holdovers from the 360 Modena are the roof, doors, and hood panel.About that interior: See it and adore it. While most cars have a key start, and some cars have a button on the dash, the F430 has its red start button on the steering wheel, because this is where the F/1 drivers prefer to have them. Its placement also gives purpose to the generally useless left thumb.

On the steering wheel is something called a manettino, which is not a Campari martini but another feature borrowed from the F/1 drivers’ work space. It is a rotary switch by which you can adjust braking, suspension, shift points, and throttle response according to the road conditions or your driving ambitions.

In race mode, shifting involves a succession of finger snaps as the car bellies down like a cat stalking lunch. The setting for uphill climbs to Gstaad in January subdues power input, shift points, braking, and suspension to Lincoln levels. The fifth mode is strictly for making television commercials with professional drivers on closed courses, so do not try this at home. This setting shuts down all electronic traction and handling controls, allowing all that torque and horsepower to run wild while you hang on and try to look unconcerned. This setting is labeled CST, which may well be Italian for “You’re on your own, Giannino.”

The rest of the interior is an extension of its tactile splendor and includes all the leather, brushed and drilled aluminum trim and pedals, and model home–quality carpeting obligatory for any luxury sports car. In addition, the F430 has optional alloy or carbon fiber inserts for the dash and center console, a Fly Yellow background on the tachometer that suggests a Girard-Perregaux chronometer, snug sport seats, and paddle shifters blessedly fixed to the steering column rather than the awkward alternative of being mounted to revolve with the steering wheel.

Standard transmission is a manual 6-speed with a button-activated automatic. And thank you, Ferrari, for listening to those who carped about the vaunted yet flawed Cambiocorsa F/1 transmission (found on the 575M Maranello and early Maseratis). The transmission lag and slap have been addressed by reducing the shift intervals to 150 milliseconds from what seemed like five minutes, and shifting to reverse has been simplified to punching a button rather than lifting and tugging a toggle. Mille Grazie.

Yet another innovation is the E-Diff, a system of sensor-controlled clutches within the differential that split the torque transmitted to the wheels. Bend the car a little out of shape and lose a portion of the traction, and power is automatically delivered to the tires with grab. Theoretically, say Ferrari boffins, it is possible to send 100 percent of the available power to just one wheel.

Behind all of this technology, however, lurks a dangerous belief that today’s traction controls will overcome the laws of physics no matter how daft and bungled your handling. Not so. Excessive forward velocity plus sudden side force still equal rotation of the mass, as we demonstrated by unleashing 490 hp and 343 ft lbs of torque while departing one tight turn in second gear. Fortunately, a combination of E-Diff and human response did catch the car as it was passing through 90 degrees.Still, maneuvering the F430 is a dream. At all speeds, through most configurations, and on geography ranging from mountain hairpins to autostrada straightaways, the car remains flat and attached to the road as though by Gorilla Glue. There are no leans, no tilts, no sense of weight shift—not even when a combination of driver bravura, brain fade, and jet lag made us blast around something slow and blue on a mountain hairpin among the Tuscan twisties. Electronics kept car and aplomb intact while we short-shifted out of the turn and quickly motored on, able to make it appear as though the car’s extraordinary stability was all our doing.

Steering is precisely where it should be. Pirelli Rossos on 19-inch wheels deliver a tire patch the size of Venice. The car does not accelerate; it leaps, and the shifting is hair trigger and seamless. The carbon-ceramic braking by Brembo is fade-free and apparently endless, no matter how deep or often your Piloti, right or left, stomps the pedal.

Only one flaw to the F430 is evident: zero vision when reversing. Motoring to the rear requires a handler or a guide dog to avoid the bollards and bicycles of medieval Italy. It is regrettably reminiscent of the Lamborghini Countach, in which the best means of reversing was to open the door, lean out, look backward, and twiddle your rosary. And the noise is a little off-key. Under power, the engine is pure Pavarotti, but when idling it sounds no better than a riding mower.

Deliveries of the F430 are scheduled to begin in February. (Expect a Spyder in a year or so.) With optional trim and trinkets, taxes, and customizing (16 body colors, 12 leather colors, and eight tones of carpeting) by Carrozzeria Scaglietti, the car will cost between $160,000 and $180,000. That may seem less than affordable for an entry-level car, but what an entrance it can make.