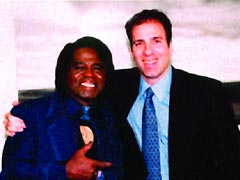 As an undergraduate strolling the halls of the University of Pennsylvania, David Pullman used to gaze at the oil and canvas likenesses of once-prominent financiers adorning the walls. He longed to become as famous and one day have his own portrait hanging alongside these walrus-whiskered captains of industry. Pullman would indeed make his fame and fortune in the financial world, but he would do it in a non-traditional fashion: on the earnings of pop music stars.

The former bond trader rocked the financial establishment five years ago when he created Bowie Bonds, a deal that raised $55 million and represented the first time a security had been issued based on the future royalties of a recording artist. “It was such a breakthrough because it was the first ever securitization of any type of intellectual property,” says the 40-year-old Pullman, who completed the deal in about three months. “I did it so quickly that people were shocked.”

Pullman’s bonds work like this: The money he raises goes directly to the artist in the form of a nontaxable loan. A bond is issued, and investors collect their principle and interest in 10 to 20 years by earning roughly 8 percent annually from the artist’s royalties. The investor bears the risk if royalties come in lower than expected, and in the event of a default, the investors own the artist’s copyrights.

Pairing music and bonds successfully may have surprised industry watchers, but Pullman says he was destined to make his mark in a unique fashion. As a boy, he admired Thomas Edison, a master of novel thinking and invention. Pullman says that like Edison he has always possessed a drive to change what other people are content to accept. “An inventor always does that because he is changing structure,” says Pullman, a descendent of George Pullman, inventor of the eponymous railroad sleeper car.

Like most New York financiers, Pullman has a mile-a-minute style of discourse, often carrying on three conversations simultaneously, or so it seems. Each tête-à-tête is peppered with tangents of wild flights of fancy. For example, speaking about collecting art and discovering young up-and-comers by prowling through New York’s endless galleries, he launches into how, in another life, he would like be an art thief. It is an elegant crime, he says half-jokingly, that involves capturing something that is not only beautiful, but supposedly unattainable.

He is brimming with yarns and anecdotes, many of which are punctuated with ebullient laughter. His face glows with a childlike sense of wonder—his girlfriend, model Ginger Overholter, divulges that he dresses up as Speed Racer every Halloween—always observing, processing. “Working is his main focus,” says Overholter. “He never rests for one minute. He just doesn’t rest. You can see in his eyes he’s computing hundreds of things around him, and he reads everything.”

Pullman is a longtime long-distance runner, and his business style reflects an attitude of someone in for the long haul. He has always been driven and determined, says his sister Heather Pullman, a television producer. “He sees something and goes for it—no matter what it takes.”

Edison was more than just a childhood hero to Pullman—he owes his success in part to Edison’s invention of the phonograph. Without it, and the music industry that ultimately sprung from it, Pullman might still be managing the debt division at Fahnestock, a New York–based securities and investment services company. Pullman learned that David Bowie was considering selling some of his publishing rights, but soon discovered that the artist was eager to exploit the valuable commodity rather than relinquish it. A moment of inspiration struck, and Pullman conceived the idea of releasing a bond based on Bowie’s future royalties. The rights to the music would be the collateral if the bond failed. “Bowie jumped on it,” says Pullman. “He thought it was great and was very supportive.”

Once Pullman realized he could make a career by securitizing intellectual property, he left Fahnestock and formed The Pullman Group. Not everyone was as enthusiastic as Bowie. Soon after the bonds were issued, The Wall Street Journal published an article that questioned Pullman’s sanity. “But the flip side,” says Pullman, whose company is based in New York City and employs about 30 people, “was that 50 investors called up to buy the bonds that morning.” The bonds also raised the ire of people in the music industry. “The establishment—record companies, publishers, and studios—don’t like what I’m doing because this changes the status quo,” he says. “The artist now has capital, and the corporations don’t want that.”

When the bonds showed signs of success, rating Single A and earning a return comparable to or better than municipal bonds, the press and financial community called it a fluke, classifying Pullman as a one-hit wonder.

(At least one writer, however, was impressed with Pullman. Linda Davies was so inspired after reading about the rogue financier that she based a character on him in the best-selling novel Something Wild. The investment-banking-mystery-thriller follows a rock star named Redford who issues a $100 million Pullman Bond.)

To the contrary, since the Bowie deal, Pullman has signed $30 million deals each with Motown songwriting team Holland Dozier Holland, James Brown, Ashford & Simpson, the Isley Brothers, and the estate of Marvin Gaye. His next bond offering, which will be sometime in 2003, will include a pool of artists and songwriters encompassing every decade and genre of American pop music. “Everything’s moving from hard assets to intellectual property,” he says, adding that entertainment licensing deals are a $200-billion-a-year business. “It’s going to be the largest asset class in the world, and we’re just in the infancy stage.”

Not all of Pullman’s deals, however, have gone as smoothly as the first with Bowie. After several additional successes issuing bonds, Pullman encountered snags with the Isley Brothers’ deal. EMI Records bought the copyrights in an attempt to block the exchange, and at the same time, singer Michael Bolton tried to purchase the copyrights in order to extricate himself from an infringement lawsuit. Also, one of the brothers was facing bankruptcy, and the IRS, too, wanted to halt the sale.

In the end, however, Pullman got his deal. “He’s very tough,” says Billy Meshel, CEO of Music and Media International, a Los Angeles–based music publisher. “He’s not going to get screwed.”

So far, that has held true. Pullman won a long legal battle with Prudential Insurance, with which he had formed a joint venture. He successfully argued that Prudential and its subsidiary, Prudential Investments Corp., misappropriated his proprietary information when they abruptly ceased affiliation with him—and launched the same venture two weeks later. “Everybody and his brother has tried to copy us,” says Pullman.

Perhaps it is fitting that Pullman’s first offering was based on Bowie’s titles such as “Rebel Rebel” and “Future Legend.”