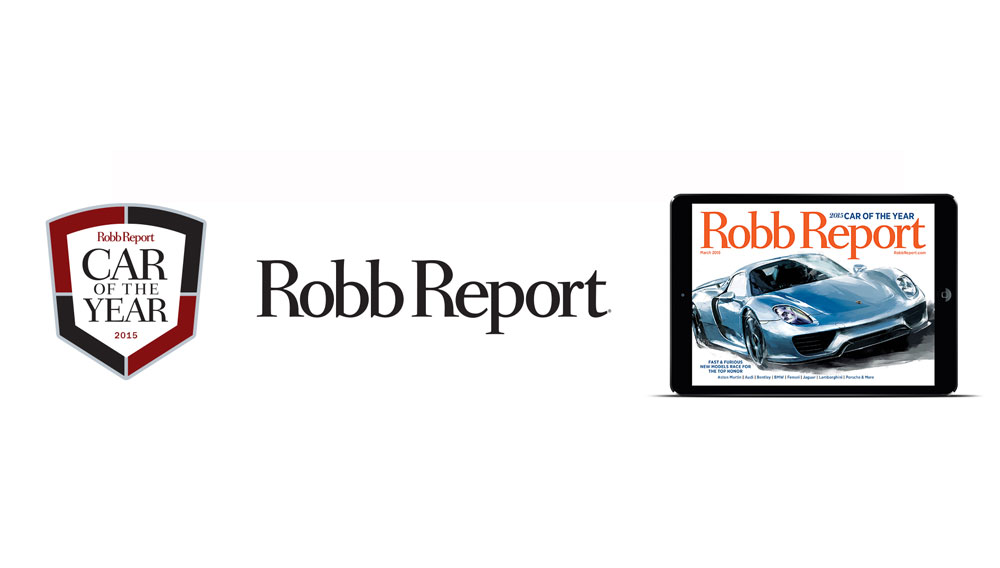 MALIBU, CA (February 23, 2015) – For the first time in the award’s 22-year history, Robb Report’s Car of the Year honor will be presented to a plug-in hybrid, as the international luxury lifestyle authority has selected the 900 hp Porsche 918 Spyder from a field of 13 newly introduced luxury and sports cars.

Thanks to its prowess as a plug-in hybrid that has “more in common with a Formula 1 racecar than a practical daily driver,” the 918 becomes the second Porsche to win the Car of the Year award in the past three years. Most recently, the seventh-generation Porsche 911 Carrera S earned the distinction in 2013.  The 918 was one of three hybrids vying for the prize in this year’s competition.

“The 918 Spyder is the best—and most groundbreaking—Porsche ever,” raved Robb Report’s automotive consultant, Robert Ross. “Robb Report’s first-ever hybrid Car of the Year winner develops almost 900 hp from two electric motors and one gasoline engine. Porsche’s supercar showcases state-of-the-art technology and design, offering a tantalizing taste of what the future holds in store.”

Now in its 22nd year, the award recognizes an automobile whose technical excellence, styling, and performance captivate Robb Report’s judging panel. This year’s Car of the Year competition involved about 140 judges and was held at Napa Valley’s Meadowood resort.

Selections resulted from extensive test-driving by a panel of experts that included Ross; Robb Report’s editor in chief, Brett Anderson; senior editor Shaun Tolson; and senior correspondent Paul Dean. These journalists were joined by about 140 members of the private Robb Report Club, which includes top executives and Robb Report readers.

More information on the 918 Spyder is available at RobbReport.com/coty. In addition, full results from the competition are revealed in Robb Report’s March issue, hitting print and digital newsstands now.

Robb Report also offers extensive Car of the Year digital enhancements in its tablet edition and on its website, RobbReport.com. These include exclusive video footage of the top three finishers, with behind-the-wheel perspective from Ross as he navigates these spectacular sports and luxury models on the Silverado Trail in the Napa Valley.  Slideshows provide additional visuals of the other participating sports and luxury vehicles.