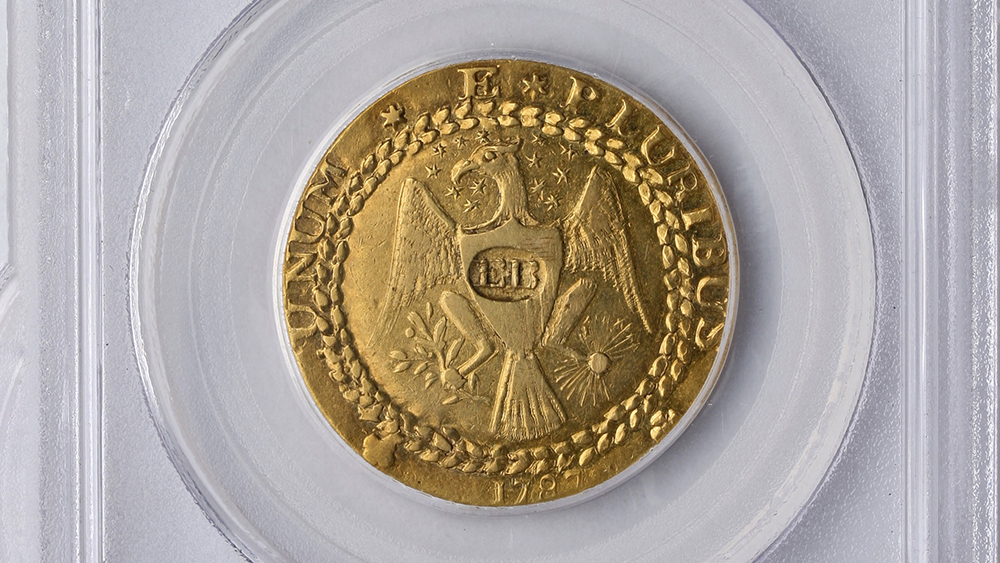 The Holy Grail of coins has just popped up for sale. The 1787 Brasher Doubloon was the first gold coin struck in the US and represents one of the most important pieces in America’s numismatic history. It was originally worth about $15, but is currently being offered privately for 1 million times that price.

The coveted coin was privately minted in 1787—five years before the federal mint opened—by Ephraim Brasher, a New York silversmith, who lived next door to George Washington. While Brasher struck a small batch of Doubloons, this unique piece is one of just seven that were produced. This particular example is the only one to have Brasher’s hallmark initials punched on the eagle’s breast; the others, including one in the Smithsonian, have “EB” stamped on the eagle’s wing.

“It was the first gold coin in the denomination dollars, and it set forth how our monetary system would move forward,” numismatic adviser and president of PCAG Inc. Jeff Sherid tells Robb Report. “There is no other coin that can actually claim that and it puts this unique Brasher Doubloon in a class all by itself.”

The rarity tips the scales at 26.6 grams and is composed of 89 percent gold, 6 percent silver, 3 percent copper, and 2 percent of various elements. One side features a mountain range and was adopted from the New York State coat of arms, while the reverse includes the eagle and other elements that make up the Great Seal of the United States. It’s also stamped with the country’s motto “E Pluribus Unum,” which means “out of many comes one.”

“It’s not about the gold content but about the history of the coin and what it stands for in our country,” Sherid says.

The coveted coin has flipped between collectors just a handful of times, exponentially increasing in value with every sale. It sold for $625,000 in 1981, $2.99 million in 2005 and an impressive $7.4 million in 2011. The current owner, a former Wall Street executive, purchased the Brasher through PCAG Inc. for an undisclosed sum in a 2015 private transaction.

“He saw the coin for what it was: a huge investment,” Sherid says. “We always knew that at one point he was going to sell it—he’s not a collector, he’s an investor—and the market on ultra-rarities has been strong.”

The Los Angeles-based firm is currently offering the coin privately at an asking price of $15 million, though Sherid believes it could reach $100 million in the future. The firm says it has received a number of serious inquiries.

“Who do I think would buy the coin? Any smart investor who looks at all aspects of the market,” Sherid says. “I personally don’t believe you can go wrong with this coin if you hold on to it and sell it at the right time.” Indeed, each of the coin’s previous owners has managed to turn a lofty profit.

“It’s the Mona Lisa of our industry,” Sherid adds.