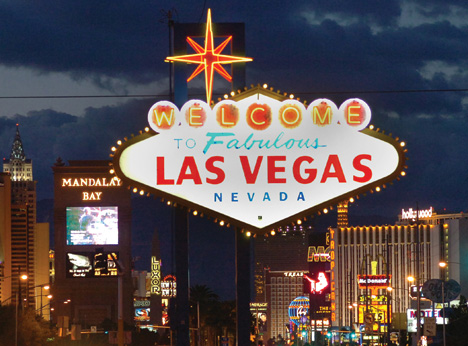 “How I wish that there were more than 24 hours in the day.”

When Elvis Presley spoke that line in the iconic 1964 film Viva Las Vegas, he was right. There weren’t enough hours in the day to savor that incredible all-night Vegas buffet of just about everything one could imagine and then some. Back then, Las Vegas was best known for extravagant, often topless reviews, the Rat Pack smoking and crooning, and for legalizing two things that were illegal practically everywhere else, one of which was gambling.

Fast forward a half century and Las Vegas, while still a glittering dawn-to-dusk oasis in the middle of the Nevada desert, is a place that in many ways Dino, Sammy, and the King would barely recognize. Elvis himself, who first unveiled his famous white jumpsuit at the International Hotel in 1969, would be surprised to see some 30 incarnations of himself walking around Las Vegas, and no fewer than seven Elvis impersonator shows playing every night.

Neither he nor the Rat Pack—which now has its own impersonator show—could have imagined the Bellagio—a casino hotel as well known for its art collection as its playing tables. Or luxury resorts like The Palazzo or The Venetian offering nothing but suites? more than 7,000 of them. And the idea that people would actually come to Las Vegas for the food would sound to them like some running gag in a Don Rickles routine.

But haute cuisine in Las Vegas is no joke. Today the city is an international center for the finest dining in the world. For example, Bellagio is the only hotel in the world that is home to two AAA Five Diamond restaurants, Picasso and Le Cirque. It also boasts three Master Sommeliers, again the most of any location, and with 50,000 bottles in its cellar, Bellagio serves more wine than any hospitality outlet in the entire United States.

Of course, those in search of haute dining also expect to find haute shopping, and Las Vegas, now an international fashion destination, does not disappoint. One of the newest retail jewels, The Shoppes at The Palazzo, offers 60 world-class fashion brands and encompasses perhaps the single densest concentration of designer boutiques in the world including Diane von Furstenberg, Michael Kors, Jimmy Choo, Van Cleef & Arpels, and Piaget. And for an unforgettable shopping experience, The Venetian offers 80 international boutiques and a classic ambience that includes cobblestone streets and gondolas coursing along the Grand Canal.

And as unlikely as it may have seemed, not that long ago, to imagine people actually moving to Vegas to live and work and lead a “normal” life, during the past 20 years hundreds of thousands of families have done just that. And their need for housing triggered a decade-long building boom that was and will again be the envy of the country.

What attracted those families to Las Vegas, including an excellent public school system, over a dozen private schools, the University of Nevada and a half a dozen private colleges, also lured non-tourism based businesses such as Bigelow Aerospace. In a word: oppportunity.

” Entertainment Capital of the World,” Las Vegas has neon running through its veins. It is the shows, the casinos, the all-nonstop action of Las Vegas that draws tourists and conventioneers—nearly six million delegates a year attending more than 22,000 conventions—to its bright flame.

The Two Sides of Vegas The Strip and Downtown

Emblazoned on that unmistakable Vegas sign, the one that looks like a cross between a kitschy billboard announcing a motel vacancy and a hood ornament on finned car, is one word that says it all: FABULOUS. As in: “Welcome to FABULOUS Las Vegas, Nevada.”

And Las Vegas Boulevard, better known as the Strip, is fabulous indeed. It is a younger cousin to downtown Las Vegas where it all started more than a hundred years ago, in 1906, when the still-standing and still-operational Golden Gate Hotel opened for business.

The Strip, just more than three miles long, is crammed with eye-popping architecture and magnificent hotels and casinos. It’s trimmed in flashing lights and neon that pulsates audibly while music plays, volcanoes erupt, and fountains soar hundreds of feet into the air. It’s here that you see the Eiffel Tower and just down the road the Brooklyn Bridge and around the corner the canals of Venice and then a roller-coaster corkscrewing high above the ground.

It’s here that cars create two moving streams of light, red and white, while people by the thousands walk up and down and over the Strip. There’s even a laser beam visible from space, penetrating the night sky, inviting the whole universe to come and play. Which it just might do in the centuries to come.

But in a century gone by, it was downtown Vegas that set the stage literally for Bugsy Siegel and all the other visionaries who couldn’t let go of the idea that for some magical and inexplicable quirk of behavior, normally reasonable people would travel to the middle of the Nevada desert to gamble and gambol because they could leave their secrets behind when they returned to Des Moines and Pleasantville.

Vegas past and Vegas future coexist in downtown, where the Fremont Street Experience, a spectacular $70 million canopy of light and sound envelopes the historic hotels and casinos along four blocks of Fremont Street. Like most things in Vegas, downtown looks its best at night with lights blazing, music playing, crowds mingling, and the ever-present street performers entertaining.

In Vegas, The Night Time, In Fact, Any Time, Is the Right Time

From traditional casino lounges and cocktail bars to dance-till-dawn night clubs featuring top DJs, the action never stops in Las Vegas. Anytime is the right time to pull up to a blackjack table, roulette wheel, or craps table. Casinos are open 24 hours a day. So if there is a game to be played, you can play it in Las Vegas, dusk to dawn.

With the World Poker Tour transforming poker into a mainstream sports sensation, hotels like Bellagio are shattering the image of dark, dreary smoke-filled poker dens. In fact, based on feedback from players, Bellagio just opened a 7,000-square-foot, 40-table poker room with Leroy Neiman artwork and a Murano handblown glass chandelier suspended from the ceiling.

For those who prefer non-table gaming, many casinos now offer sports betting, where you sit back and relax in huge sports books and watch the sports action live on big screens. This fall, The Palazzo is opening Stadium, with 70 HDTVs, stadium seating, and a menu from a famous chef. Meaning, you don’t have to choose between good food and a good game.

Of course, the omnipresent “one-armed bandits,” once a diversion for companions of serious table players, are bigger than ever and the playing—and winning—never stops. But whether you plan poker, sports betting, or table games, most casinos offer gaming lessons for those who would like to learn a bit more before hitting the floor. Even in Vegas, it never hurts to know the rules.

But when it comes to Las Vegas nightlife, there really are no rules. As has been true for nearly a century, anything goes, and it goes all night long. From traditional casino lounges and cocktail bars to dance-till-dawn nightclubs featuring top DJs, the party never stops. Ultra lounges, the latest trend in nightspots, are stylish, intimate spaces with the newest music in a conversation-friendly environment.

One of the hottest night spots for “vibe dining” in Las Vegas is TAO at The Venetian, an Asian bistro with a restaurant, nightclub, and lounge all under one roof. The creators of TAO also came up with the idea for LAVO, another chic restaurant and nightclub this time drenched in a bathhouse theme dripping with a style that attracts the beautiful people like bears to honey.

And while the heart of Las Vegas beats a little faster at night, during the day the desert climate turns into a golfer’s paradise—all year long. Mild weather, blue skies, spectacular views of the Strip and the surrounding mountains makes Las Vegas the ideal destination for a golf outing, any time. With more than 60 golf courses in the Vegas area, there are ideal options for any handicap.

One of the more spectacular courses is Bellagio’s Shadow Creek. An almost magical mirage in the barren desert, Shadow Creek’s startling mystique of rolling terrain, glistening brooks and ponds, lush gardens and spectacular waterfalls transport visitors to a sensory oasis more akin to a tropical clime.

Standing on the perimeter of this golf Eden, guests facing endless desert views would never guess that one of the nation’s top-rated golf courses was directly behind them.

Perennially ranking among the Top 10 courses from both Golf Digest and Golf Week, Shadow Creek was designated the best golf course in the world by the editors of Robb Report in the annual Best of the Best issue.

Vegas by Any Other Name Is Still…

While the current preferred and somewhat official nickname for Las Vegas is “the Entertainment Capital of the World,” it has also rightly been called, with no apology necessary to Paris, “the City of Lights.” Of course, in its former and rawer heyday, it unblushingly accepted the moniker “Sin City,” while those who called it “the Capital of Second Chances” might have erred a bit on the side of optimism.

Whatever its nickname or headliners or its largest source of revenue, Las Vegas is and hopefully always will be just a little bit naughty. Even in its 21st-century incarnation as a boomtown for families and non-casino businesses, the city fathers and mothers could not help themselves choosing a PR tagline that was just too good to pass up. So good, in fact, that “What happens in Vegas, stays in Vegas” is permanently cemented into the American lexicon. Perhaps because that’s the one thing that’s really never changed about the place.

Just as Las Vegas will always be a little bit naughty, its reputation for the quirky, the eccentric, and the downright out there shows no signs of waning.

Of course, there are the weddings, officiated by everyone from Elvis to Captain Kirk to the Rat Pack (all of them). In fact, “wedding officiant” is considered a profession in Las Vegas, where there is no waiting period or blood test required to get a marriage license. Two very good reasons why Las Vegas issues about 300 licenses a day, every day.

Another less quirky but iconic Las Vegas profession, the showgirl, while still a Vegas institution, has diminished with a change in tastes and a visitor profile that is less guys’-night-out and more family and couples on vacation. Cirque du Soleil’s acrobatic artistes outnumber statuesque runway models three-to-one. In fact, true showgirls who parade in headdresses that can weigh in excess of 30 pounds, now number less than 50. And while there are still topless reviews, most of today’s showgirls are agile, lithe dancers and talented performers who keep their tops on.

Yes, times do change, even in Las Vegas, the Entertainment Capital of the World, the City of Lights, the Capital of Second Chances?and now, many first chances, too.