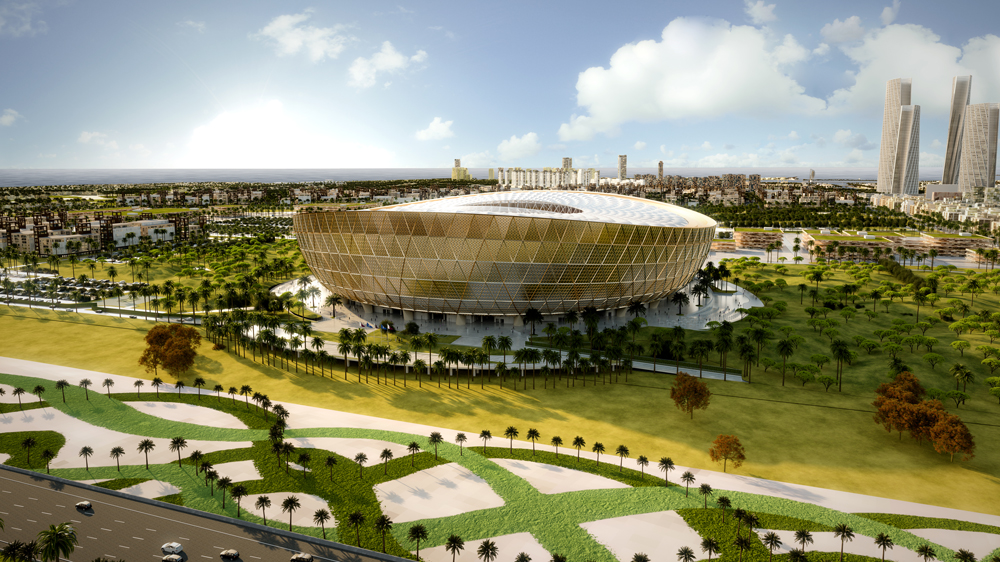 Qatar wants the FIFA World Cup to be golden—literally. The Middle Eastern country will host the international event in 2022, and while its national soccer team will get its first chance to play in the sport’s toughest competition, the new marquee arena might just become the event’s biggest star. The 80,000-seat Lusail Stadium, already under construction as of December, will be a giant gold structure located in Lusail City, north of Doha. Designed by the esteemed Foster + Partners firm, which is also currently working on a skyscraper in London shaped like a tulip, the stadium has a geometric shape inspired by lanterns. Known for their interplay of light and shadow, the region’s ancient fanar lanterns served as the starting point for the structure’s exterior.

The stadium will host both the opening and closing 2022 games and will later serve as a cultural hub for the city post-FIFA. “On the very same land as the home of our nation’s founder, it sits at the heart of a brand-new city,” Hassan Al Thawadi, secretary general of the Supreme Committee for Delivery and Legacy, told Dezeen. “It’s a city for the future, and once the World Cup is over, it will form a crucial part of the legacy of the tournament as it transforms to become the heart of a brand-new community.” After the games, the stadium will morph into a community space that will include schools, shops, cafés, sports facilities, and health clinics.

But if you’re already gearing up for the games (the city is expecting 1.5 million visitors), here are a few things you should know: Entry to Qatar is visa-free for 80 countries, including the United States (see the full list at Qatar Airways); guests will arrive at the brand-new Hamad International Airport; the longest distance between the other seven stadiums is just three miles; alcohol will be available in hotels and designated areas; and Qatar says there will be accommodations for every kind of visitor. Some of those accommodations include desert camps and cruise ships. But may we suggest the Four Seasons, which has the largest Nobu restaurant in the world, or the Banana Island Resort in Doha with ocean views, a surf pool, and an indoor botanical garden? Alcohol is not permitted at the latter, but we suspect that may change for the special sporting event.

A whopping $6.5 billion has been invested in building out the stadiums and training sites for the games, which will begin on November 21, 2022, and close with the final on December 18, 2022. The planned completion date for Lusail Stadium is 2020.