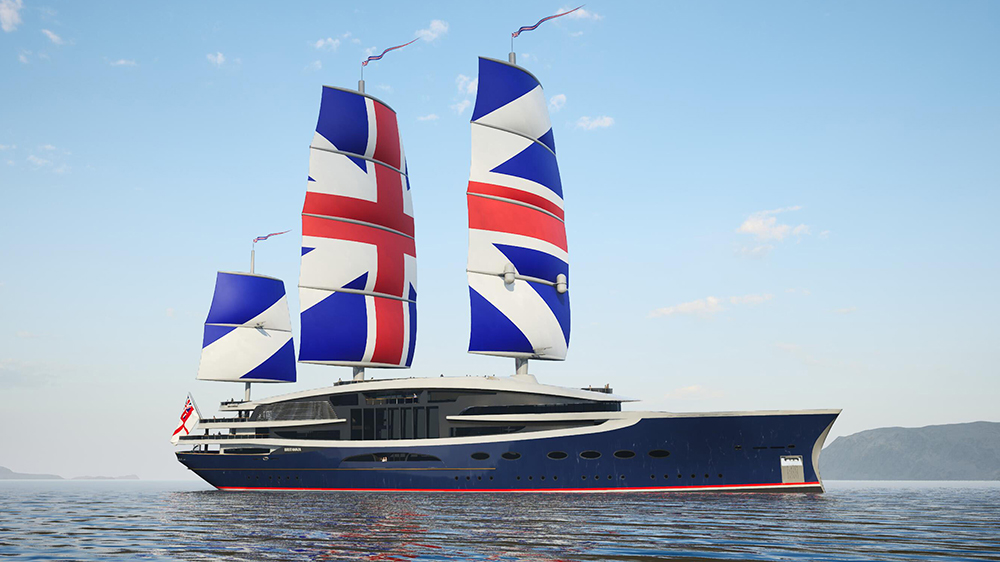 The UK’s new national flagship will be a futuristic sailing yacht covered in the Union Jack—if Gresham Yachts has anything to say about it, that is.

The London design studio has unveiled a 387-footer that it hopes will be greenlit by the UK government. Last year, Prime Minister Boris Johnson announced plans to replace the decommissioned Royal Yacht Britannia with a “first-of-its-kind” flagship that will sail all over the world promoting British interests. Gresham is one of the potential bidders that floated a Britannia 2.0  for consideration.

In fact, the firm penned a concept in 2020 before the PM had even asked for it. The sailing yacht, which was originally christened Project Albion, set the foundations for the design you see today.

The refined three-masted beauty sports billowing sails emblazoned with the Union Jack and a matching hull finished in navy and red. Although the silhouette is quite classic, the yacht has a focus on sustainability that roots it firmly in the 21st century. That’s quite important since the folks at 10 Downing Street said the flagship should reflect British design expertise and the latest innovations in green technology.

“The national flagship project is a very exciting proposition and would be an unmatched opportunity to demonstrate the best of British talent to the world,” the firm’s founder and design principal, Steve Gresham, said in a statement. “It is an opportunity to create a versatile and multifunctional vessel that could be used for official events and exhibitions alongside private meetings and dinners for government officials and dignitaries.”

Gresham says the vessel will be environmentally conscious and “use the wind and hybrid power for sailing.” It sounds similar to Oceanco’s 417-foot sailing yacht Y271, reportedly owned by Jeff Bezos, which will use three towering 229-foot masts to bolster propulsion when it’s eventually launched.

Onboard, meanwhile, Gresham’s prospective flagship will be centered around a large double-height atrium that could be used as either an exhibition space, a ballroom or a reception area. There will be meeting rooms in which the Brits can carry out business when moored or abroad. Other highlights include a helipad and a hydrogen limousine tender that can be used to fetch VIPs.

The UK government says the chosen ship will hit the water within the next four years and is expected to be in service for around 30 years. It will be crewed by the Royal Navy.

Bring on the next Britannia.

Click here to see all the photos of Gresham’s national flagship concept.