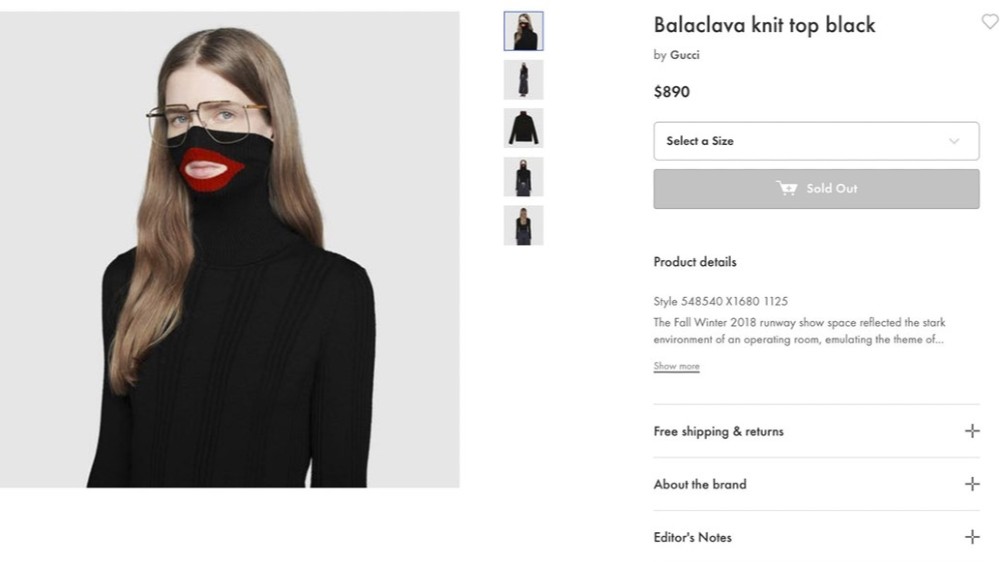 Gucci has pulled a sweater resembling blackface from its online store and brick-and-mortar shops. The $890 black wool sweater featured a built-in balaclava that covered the lower half of the face, and had a red-lipped hole for the mouth. The sweater was roundly criticized on social media for being racist and insensitive.

So @gucci puts out a sweater that looks like blackface……
On Black History Month….
And then issues an apology because they didn't know that blackface images are racist.

After removing the sweater, the Italian luxury label issued an apology.

“Gucci deeply apologizes for the offense caused by the wool balaclava jumper,” read a statement released via the brand’s Twitter account. “We consider diversity to be a fundamental value to be fully upheld, respected, and at the forefront of every decision we make.”

The controversy comes amid a backdrop of high-profile scandals in Virginia that have surfaced old photos of politicians wearing blackface.

Sadly, this is not the first time that a high-end fashion brand has been accused of carrying racist products. The Gucci controversy follows on the heels of a Prada debacle last December when images surfaced of a store window display showcasing monkey-like figures with black faces and large red lips. Dolce & Gabbana also recently came under fire for a racially insensitive campaign depicting an Asian woman clumsily using chopsticks to eat spaghetti, pizza, and a cannoli while a voiceover purposefully mispronounced Dolce & Gabbana in a mocking way. And, earlier this week, Adidas pulled an all-white style of shoe meant to honor Black History Month. In a statement the company said that the design “did not reflect the spirit or philosophy of how Adidas believes we should recognize and honor Black History Month.”

New York Times fashion critic Vanessa Friedman addressed the seemingly never-ending controversies and tone-deaf marketing last year—not as isolated incidents but as signs of a larger issue in the industry:

There’s a tendency to view this as a case-by-case brand problem and roll one’s eyes: Bad Prada! Ignorant Dolce! Silly Zara! But add it all together and it’s clear that the mistakes are symptoms of a bigger problem, which has to do with a new reality (or understanding of reality), the way the fashion industry has been built and its inability, thus far, to adapt the one to the other.

Some say it is a casualty of the global world, where brands based in one country and run by people with one understanding of history expand into other countries and view those consumers through their own foreign lens. Some say it has to do with the policing power of the internet, which allows individual voices to be heard in a way they never were in earlier times (and, occasionally, go too far).

As for Gucci, the label’s statement ended this way: “We are fully committed to increasing diversity throughout our organization and turning this incident into a powerful learning moment for the Gucci team and beyond.”

Gucci deeply apologizes for the offense caused by the wool balaclava jumper.
We consider diversity to be a fundamental value to be fully upheld, respected, and at the forefront of every decision we make.
Full statement below. pic.twitter.com/P2iXL9uOhs