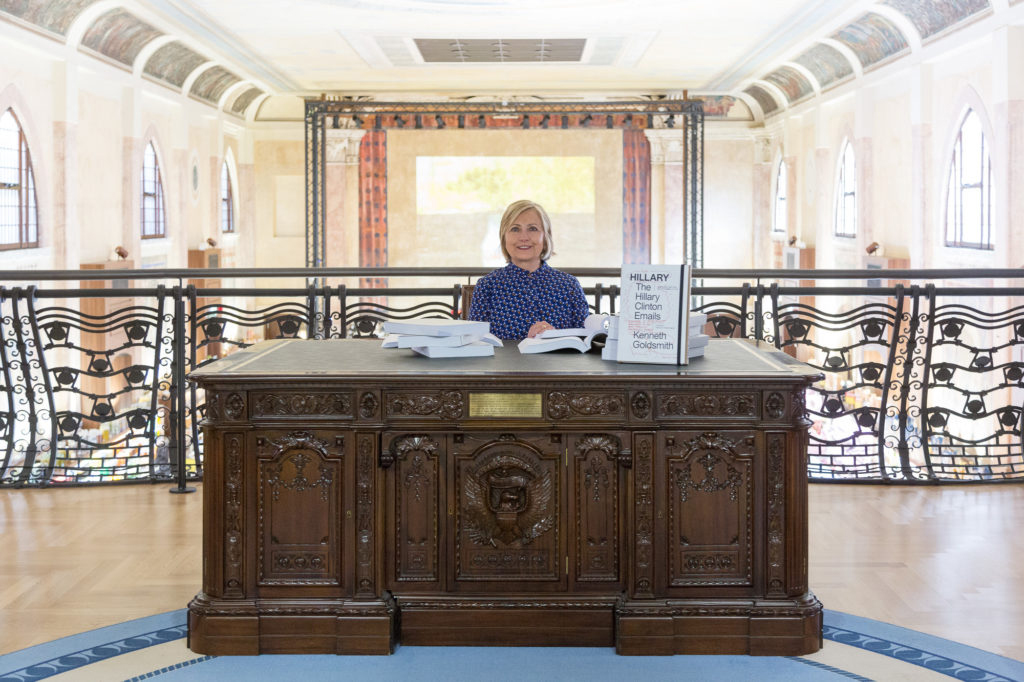 Courtesy of the artist/Francesco Urbano Ragazzi

This morning, former Secretary of State Hillary Clinton tweeted that she’d visited the Venice Biennale, and what she saw there surprised her. At a project affiliated with the biennial, at the Despar Teatro Italia, she sat at a re-creation of the Oval Office’s Resolute Desk and reread some of her now-infamous emails, which had been stored on a private server, leading many to question her ability to serve as President. (At the time, she was running as a Democratic candidate in the 2016 U.S. election. Her emails subsequently became a sticking point for Republican politicians.) It was one of those rare moments when art and life blurred so fully, it grew hard to tell which was which.

That project, created by artist and poet Kenneth Goldsmith, was titled HILLARY: The Hillary Clinton Emails (2019). For the piece, Goldsmith printed out all 62,000 pages of Clinton’s controversial emails as readymade artworks. Clinton’s tweet about the experience of seeing the piece cheekily reads: “Found my emails at the Venice Biennale. Someone alert the House GOP.”

“It’s amazing—it completed the circle, in a way,” Goldsmith told ARTnews in a phone conversation.

Found my emails at the Venice Biennale. Someone alert the House GOP. pic.twitter.com/eeXaKhy9Dz

“From the moment I heard about [the emails], I wanted to print them,” Goldsmith went on. “There was a lot of noise being made about something that you couldn’t really see, which made me want to realize them in a physical form. It’s a way of sort of reconciling Trump’s sense of this information with reality. Sculpture does this really well. There’s no more misinformation once you materialize something.”

This wasn’t Goldsmith’s first time interacting with a White House regular. In 2014, President Barack Obama invited him to come by and read some of his abstract, often avant-garde poetry. Though this brush with the political elite was far less expected, “I didn’t believe it at first. I thought I was being trolled,” he said.

In an interview with an Italian news outlet, Clinton remarked of the experience, “This exhibition is further proof that nothing wrong or controversial can be found on these emails. It makes them accessible to everyone and allows everyone to read them.” Though perhaps they might not even want to, as she followed up, “They are just a bunch of boring emails.”

Goldsmith corroborated her claim that the emails aren’t as exciting as the media had made them out to be back during the election. He confessed that he couldn’t get through them all.

“I kind of wondered what the fuss was about,” he said. “They weren’t jammed with thrilling tales of espionage, they didn’t reveal any close secrets. Mostly, they were boring.”

The Art of Politics? Estonia Just Elected a Museum Director as President

This Rare 1804 Silver Dollar Just Sold for a Record-Breaking $7.7 Million