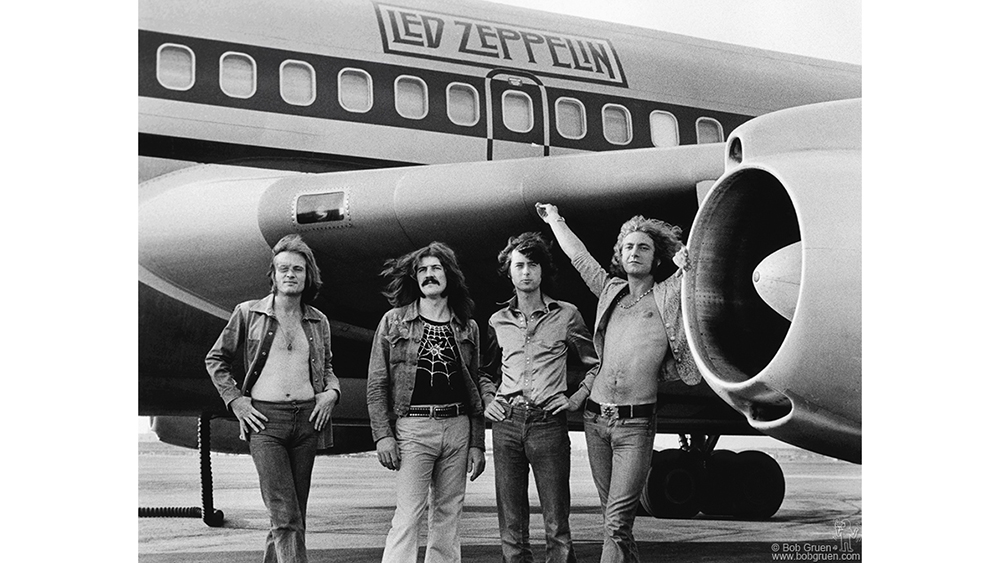 Decades before Oasis famously helicoptered onto the field at Knebworth and long before the Gulfstream G5 became the most name-checked jet in hip-hop, there was the Starship, the decadently tricked-out, constantly re-liveried Boeing 720 jumbo jet that acted as a flying tour bus for some of the biggest bands of the mid-1970s, including Led Zeppelin, the Rolling Stones, Elton John, the Bee Gees, Alice Cooper and Peter Frampton.

In 1973, teen heartthrob Bobby Sherman and his manager, Ward Sylvester, bought the first Boeing 720 ever produced (in 1960) for $600,000 from United Airlines, then spent an additional $200,000—$1.3 million in today’s currency—converting the interior. Seating dropped from 138 to 40, while new shagadelic amenities included a 30-foot-long brass-edged bar, an electric fireplace in the “drawing room,” a king-sized waterbed and shower in the bedroom, rotating armchairs and a rudimentary entertainment system and film library that included everything from Groucho Marx movies to Deep Throat. Newly christened the Starship, the groovy aircraft was ready for charter—at a then outrageous fee of $2,500 per hour. Its first paying customers: Led Zeppelin.

“It was the ultimate symbol of success—and excess,” says photographer Bob Gruen, who shot the iconic 1973 image of the band in front of the jet. “It was a lot better than getting around by limousine or owning a Ferrari, and it set the bar for being a rock star for future generations.”

For Led Zeppelin, it was also a rip-roaring good time between short-haul stops on their 1973 and 1975 tours. The Starship changed the way bands toured, with the ability to ferry large numbers of people and cargo from point A to point B and back again, obviating the need for hotels—and helping to fuel rock lore along the way.

Zeppelin’s infamous manager Richard Cole called it a “flying gin palace,” though the band’s tastes often ran richer. “In those days, we went through a phase where we only drank ’64 and ’66 Dom Pérignon,” Cole told The New York Times in 2003. “If we found a good deal we’d have one of the assistants buy several cases and store it on the plane.”

Many stories of the debauchery aboard the Starship have become legendary, though it’s difficult to parse fact from fiction. Rumor has it that “Welcome Allman Brothers” was written in cocaine on the bartop when the band first chartered it, while Zeppelin drummer John “Bonzo” Bonham supposedly tried to open the plane’s door while flying over Kansas City to relieve himself. Gruen tells a story of traveling with Elton John’s entourage on the star’s birthday, when Stevie Wonder emerged from the bedroom to surprise John with a version of “Crocodile Rock” played on the electric organ under the bar.

The Starship’s last hurrah was in 1976, when Peter Frampton—who favorably likened the jet to Air Force One—became its final passenger during his “Frampton Comes Alive!” tour. It was dismantled for parts in 1982. The Starship’s musical reign lasted just four years—a fittingly short but supernova-bright burn for the most famous plane in rock ’n’ roll.