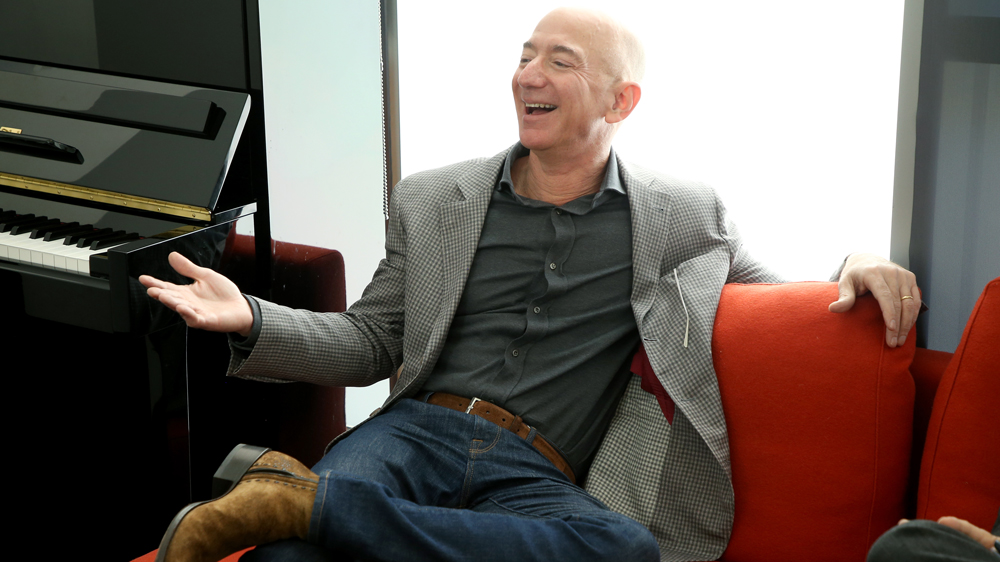 What a difference a day makes.

Riding high on yet another surge in Amazon’s share price, billionaire founder Jeff Bezos saw his personal net worth once again shatter records by jumping a whopping $13 billion in one 24-hour period. The 7.9 percent increase in the stock value was the largest increase the tech giant has enjoyed since December of 2018. Likewise, the swelling of Bezos’s already considerable personal fortune is also the sharpest jump recorded on Bloomberg’s Billionaires Index since its inception in 2012.

So how much was Bezos worth after the initial surge? A staggering $189.3 billion. That figure has since dropped slightly, but no need for concern––as of publication it still stands at a healthy $186. Analysts believe the stock growth that created the extra billions for Bezos was driven by heightened demand for online shopping, as the coronavirus pandemic continues to spread aggressively across the US and other parts of the world.

Jeff Bezos added $13 billion to his net worth on Monday, the largest single-day jump on the Bloomberg Billionaires Index since it was created https://t.co/4Q5e88GPsq

In 2020 alone, Amazon’s stock is up 73 percent, which has created an additional $74 billion of wealth for Bezos. The spike has also been good for MacKenzie Scott Bezos, the CEO’s ex-wife and a key figure in Amazon’s founding. She has seen a notable bump in her own valuation, gaining $4.6 billion to become the 13th richest person on earth.

As for the person occupying the top slot on that list, Jeff Bezos is now personally worth more than corporate behemoths McDonald’s ($143), Nike ($122) and Costco ($145). Oh, and he’s also worth more than 50 percent of those listed on the Dow.

Bezos owns 55.5 billion shares in Amazon, which gives him just slightly over an 11 percent stake in the company he steered to such heights. As a result, his personal financial status is closely aligned with the fortunes of the company he founded. And with Covid-19 cases continuing to increase and wreak havoc in major markets, such as the United States and India, the desire for at-home shopping options is unlikely to abate anytime soon.  So no one will be surprised if Bezos shatters this record, too.