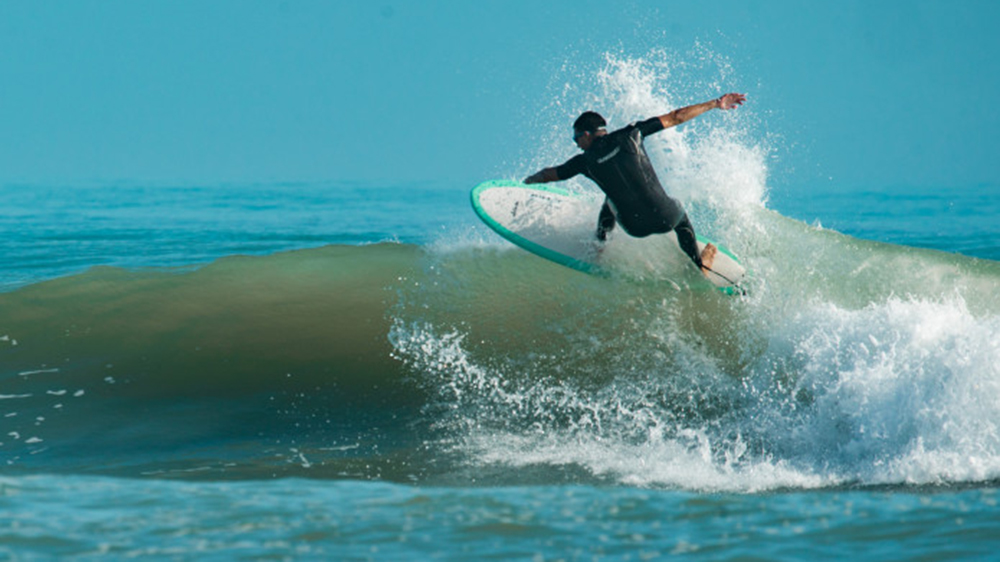 Jetson Surf Technology is trying something different with its electric surfboard.

The Florida startup’s board features a built-in jet drive motor like the rest of its peers, but it only runs for short bursts, according to New Atlas. This helps creates an experience closer to that of traditional surfing, and also allows the rider to go longer periods of time between charges.

Most electric surfboards let you control their motor via a squeeze throttle or handheld remote. On Jetson’s board, it’s controlled by a waterproof touchpad integrated into the top deck. From the pad, you can select one of four surf modes: Take Off/Boost (which temporarily gives you access to 100 percent power), Impact Zone (75 percent), Paddle Out (50 percent) and Eco Mode (25 percent). Select a mode, stand up and you’re ready to go.

Once engaged, the board’s jet drive—which can produce up to 20 pounds of thrust—will give you a temporary boost that will make paddling out or cutting through the waves easier. When Take Off/Boost mode is selected, the board gets a 100-percent power boost for 12 seconds, followed by a 75-percent boost for an additional 100 seconds, before the motor shuts off. Boost-assisted speeds range from 2 to 6 mph, which may not sound like much (especially when compared to some of the competition), but surfing’s not about speed. The motor can run for 90 minutes, but depending on how you utilize your bursts you may not have to charge it all that much. One thing to note, though, is that if you need another boost you’ll need to select your mode from the touchpad, which can be a little awkward if you’re already standing up.

Aside from the touchpad and motor, Jetson’s board looks like any other surfboard. It’s made from epoxy resin, has four detachable fins and. is available in three different sizes depending on your height and ability. There’s a 6-foot, 8-inch short board, a 8-foot “fun shape” and a 9-foot longboard. Each model comes with a charger to keep the board’s integrated lithium-ion battery fully juiced, too.

Interested? Jetson is currently running an IndieGogo campaign, which has already reached its funding goal. If you want to order one of your own, you can do so by pledging $5,395, which is 40 percent less than the board will cost after the campaign. Deliveries are expected to begin next summer.