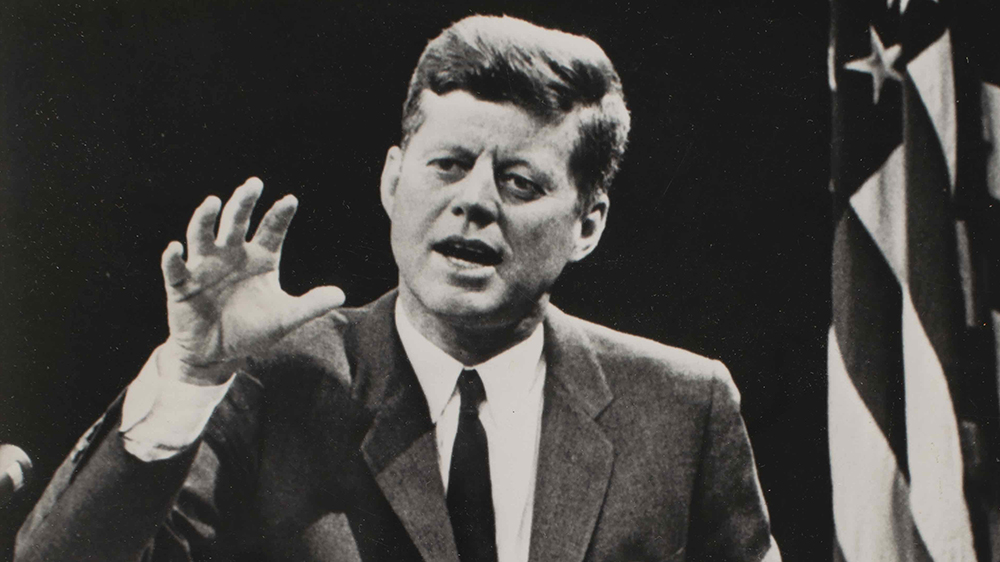 American history buffs, rejoice. Hundreds of pieces of memorabilia chronicling the life of John F. Kennedy are about to hit the auction block.

The comprehensive private collection tells the 35th president’s whole life story—from childhood to his tragically brief time in the White House—and is being offered as a single lot by RR Auction that is estimated to sell for $1.5 million.

“It’s like a curated museum exhibit in one auction,” RR executive vice president Robert Livingston told the Associated Press. “The whole is greater than the sum of the parts.”

Amassed by retired garment industry sales rep Ronnie Paloger, the collection includes historical artifacts, including a draft of Kennedy’s 1960 speech announcing his intention to run for president, a trove of rare unpublished photos and negatives of the leader and his family, promotional tchotchkes, as well as personal items, like his back brace, cigar box, golf balls and necktie. There’s even a pair of original JFK and Jackie Kennedy Halloween masks.

John F. Kennedy’s handwritten speech announcing his intention to run for the Presidency in 1960  Courtesy of RR Auction

Paloger, who was 13 when the president was assassinated in 1963, told the AP that Kennedy’s death had a profound effect on his life. The collector spent the better part of five years tracking down the items that make up the collection and is only parting with it now because he needs a cash injection before retiring.

“I ran out of money,” said Paloger. “This is my retirement fund.”

The remarkable memorabilia is expected to eclipse its seven-figure estimate. In 2017, one of Kennedy’s diaries from the summer of 1945 went for a staggering $719,000.

Prospective buyers can put in bids for Paloger’s complete collection from January 17 to January 23. If no one hits the minimum of $1.5 million to acquire the whole collection, the items will be sold one by one, though the collector hopes this is not the case.

“It would be a travesty if this is broken apart,” he said.

The collection is currently being held in the Amherst office in New Hampshire and can be be viewed by appointment. Check out photographs of some of the items below: