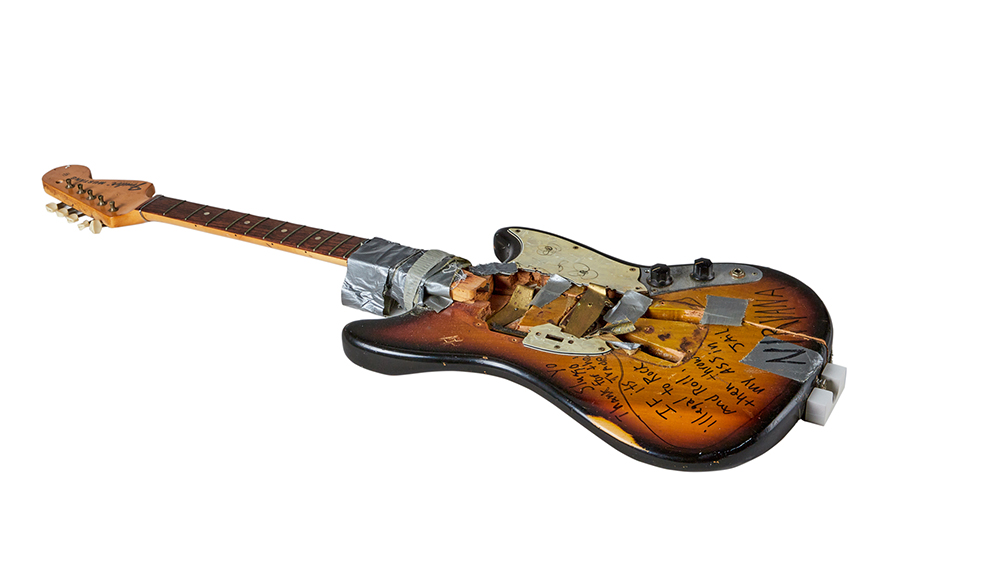 You can own one of Kurt Cobain’s old guitars, but don’t expect to strum any power chords on it.

One of the Nirvana frontman’s smashed axes will headline the Icons & Idols: Rock ‘N’ Roll auction from Julien’s Auctions, kicking off on November 11. In total, more than 1,500 pieces of rock-and-roll memorabilia will be offered by the auction house, but the Cobain guitar is one of the more show-stopping pieces available. The 1973 Fender Mustang was played, smashed and signed by the Nirvana frontman in 1989. On tour for the band’s first album, Bleach, Nirvana played small venues around the country. At the Sonic Temple in Wilkinsburg, Pennsylvania, Cobain wrecked the guitar during a performance of “Blew” on July 9 of that year.

Following the show, Cobain traded the guitar to Sluggo Cawley of the band Hullabaloo. Before passing it off, he inscribed it with “Yo Sluggo/Thank for the trade/If its illegal to Rock and Roll, then throw my ass in jail/Nirvana.” Now taped back together, the guitar is expected to hammer down for $200,000 to $400,000.

Alongside that piece of Cobain paraphernalia, Julien’s has a whole host of items that take pride of place in rock and roll history. A pair of John Lennon’s signature wire-rimmed glasses, often called his “granny” glasses, are expected to fetch $60,000 to $80,000. The specific pair on the auction block have been photo-matched to the late Beatle, and serve as an enduring reminder of his signature style. And a Wm. Knabe & Co. grand piano once owned by Bob Dylan could sell for $50,000 to $70,000. The Louis XV instrument was played by Dylan at his home in Woodstock, New York, and photos from 1968 show him composing songs at it and entertaining his children.

A number of rare items will also be up for the bidding, including a baby-blue 1949 Cadillac Series 62 convertible owned by Neil Young ($100,000 to $150,000), a car of which only 8,000 models were made. A framed black-and-white print with Tupac Shakur’s handprints and signature ($100,000 to $200,000) will be up for auction for the first time ever, with items from the rapper’s personal life being particularly hard to come by. And the acoustic guitar with which Don McLean wrote and recorded “Vincent (Starry, Starry Night)” will also be publicly sold for the first time, with an estimated price of $200,000 to $400,000.

Elsewhere in the catalog, you can expect items from Elvis, Prince, Amy Winehouse, Madonna and more. It’s a real rock-and-roll dream—one that can be your reality if you have the cash to make the winning bid.