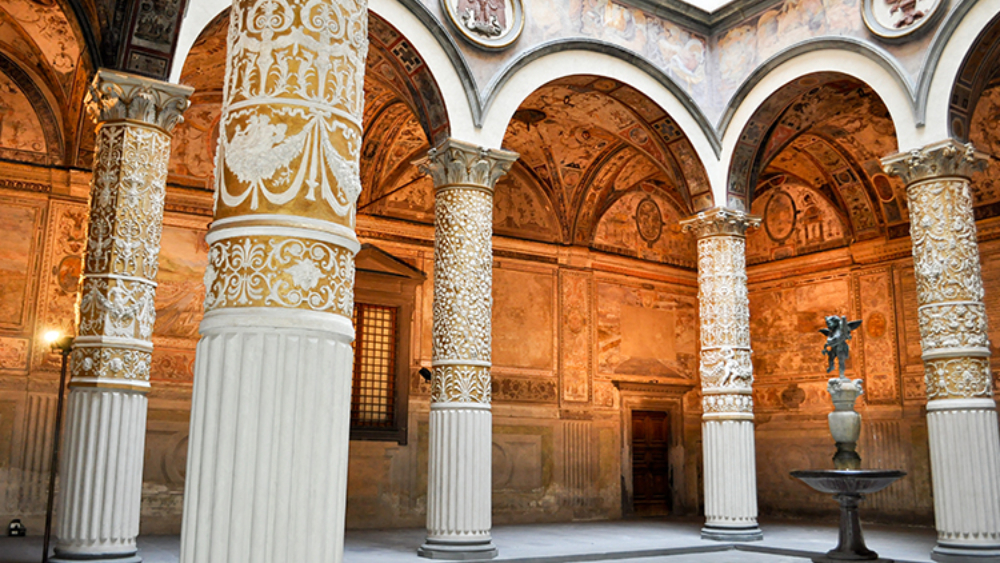 Gucci’s parent company is deepening its ties to the city of Florence.

Kering, one of luxury’s largest conglomerates, announced on Monday that it will contribute to the restoration of Florence’s Palazzo Vecchio, the grand building that serves as the seat of the municipality’s local government. The unspecified amount of funds will go toward the installation of an updated lighting system in the palazzo’s ornate Michelozzo courtyard. The work is but one element of a larger initiative entitled the Rinasce Firenze Plan, which the city of Florence announced last spring. It aims to provide aid to the cultural, economic, educational and tourism sectors in the hopes of rejuvenating the city’s struggling community.

Designed in 1453 and then extensively decorated in the next century by Giorgio Vasari, the courtyard symbolizes the rich heritage of artisanship the city fosters. That’s also why Kering remains so closely associated with the former Italian capital. Not only is it the headquarters of Gucci, but the group has also chosen Florence as the site of its leather goods production for two of its other prominent brands, Saint Laurent and Balenciaga.

A view of the courtyard’s dramatic vaulted architecture.  Kering

Kering’s CEO François-Henri Pinault was awarded the Fiorino d’Oro, Florence’s highest honor, for his contributions to the municipality exactly one year ago. In a statement, Pinault reiterated that both Florence and Tuscany (the region in which Florence is located) hold particular significance for him. “We genuinely wanted to help the city during a particularly difficult time, and decided to contribute to the enhancement of one of the many wonders of the Palazzo Vecchio,” Pinault said in the same statement.

The city and its surroundings already play a critical production role for Kering’s many brands, but that significance is only set to increase. Leather goods sale in the form of bags and other small accessories like belts already make up a considerable amount of luxury brand revenue. With overall luxury growth unimpeded even by the extreme circumstances of the pandemic, many are looking to secure supply chains that can keep up with swelling demand.